Part of the fun of being an adventure rider is traveling with friends to get yourself to places that are off the beaten track and often not serviced by cell towers.  Once there, it’s fun to get off the bike and explore your new surroundings.  But what if you want to see one thing, and your friends want to see other things?  How can you stay in contact with them while they are off on their own travels?  goTenna says it has a solution for the loss of cell reception.

Using a 1 watt, UHF limited area radio network, goTenna claims that you can keep in contact with your friends up to 4 miles away.  Once you have downloaded the goTenna app, you can connect it to your phone via Bluetooth.  You can then use the goTenna app to send and receive texts to an individual or groups.

Your data is encrypted and goTenna doesn’t centrally store your data.  goTenna can also send your GPS location displayed on a map to the person or group you desire.  So if you are off checking out a lake, while your friend is doing some hiking, the two of you can remain in contact and let each other know how and where you are.

goTenna offered to send us a pair to check out its capability and we took them up on their offer.  Soon thereafter a small box arrived with two goTenna modules.  goTenna says that it would take 3 hours to fully charge the module from 0% to 100% and ours charged in less than that.

The devices themselves are small, about 5″ X 1.25″ X 0.5″ and weigh in at under 2 ounces.  In addition, they come with a small looped rubber strap that lets you attach the unit to you or your gear.  Once attached, you pretty much forget about it. 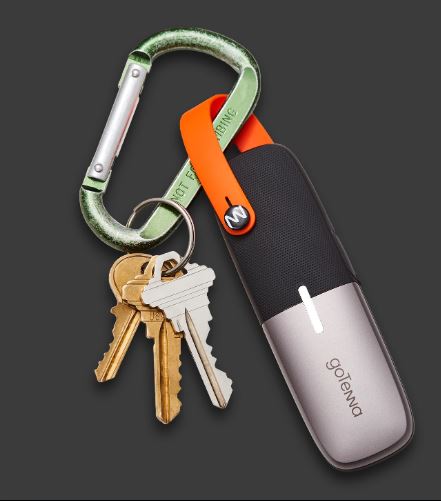 The goTenna device is small. It’s not much larger than the keys on your keychain. Photo credit: goTenna

By way of example, Kim and I were the only ones in our network, we sent about 20 messages and GPS locations in a little over an hour.  By the time we were done, our units had consumed about 10% of battery life.

We had planned to do a real-world test in Nova Scotia in places where there was no cell coverage.  We started riding from Vermont to Nova Scotia but hurricane Dorian had different ideas and 3/4s of the way through New Brunswick, we were forced to turn back.  So once we returned to Vermont, we set about testing.

We live in a mountainous and heavily forested area so there’s not lots of open flat space.  We knew that in this type of environment, the goTennas would be challenged.  So to start our unscientific test, I stayed at our house, while Kim headed up the mountain. 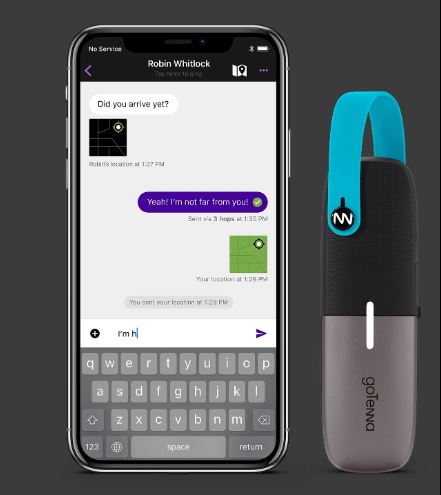 goTenna connects to your phone via Bluetooth allowing you to text and receive GPS location maps on your phone. Photo credit: goTenna

At a quarter-mile, we were able to both send and receive messages.  A bit further into the forest a half-mile away, things were still looking good with us both able to send and receive both texts and GPS map locations.  At about 3/4 of a mile range, things started to deteriorate a bit and comms became a bit spotty.  Sometimes messages came through and other times they didn’t.  The same thing was true of distances longer than 3/4 of a mile.

In the case of missed messages, we did get a notification on the phone that the message may not have gotten through.  That’s a feature that is missing on some other communication devices.

In addition, each user can set their devices to accept location requests automatically.  So if I wanted to know where Kim was, I could simply ping her goTenna and it would provide her location on a map.  Nice.

To be fair, we expected degradation of the goTenna’s performance.  The terrain we are is likely the most difficult terrain for a device like goTenna.  There are lots of line of sight impediments that would hamper reception of any similar device.  In open terrain, we believe the goTenna’s range may have been far better.  We may test that theory in the not too distant future.

If more than two people have goTenna, its range can be extended by hopping from multiple devices.

Another thing that put the range at a disadvantage was that there were only two of us.  goTenna utilizes mesh technology and can connect with other goTennas to increase its range.  So even if a person you don’t know has a goTenna in operation, that goTenna could be used like a “repeater” to send you messages.  Had we had more people in our network, the range and communication capability would likely have been improved.

If you want more capability, goTenna offers an enhanced service via subscription.  For $29 per year you get the following additional services:

goTenna can help you to keep track of others in your party.  Not only can you stay in contact, but you can know precisely where they are via its GPS map capability.  We got about 3/4s of a mile range but as mentioned earlier, it was in the most difficult terrain and in a network of only two.

So to sum up, the goTenna performed well to the extent of its range.  Texts and GPS maps came in rapidly and provided accurate locations.  It’s a useful device that can keep you in touch with multiple parties where there is no cell service.