This guest post was kindly contributed by Michnus and who originally published this article here.

Selecting the best motorcycle GPS can be somewhat of a challenge due to the limitations of placement, touch screen, size, with more abuse and waterproof and dustproof properties as opposed to conventional GPS units.

Then there are the map sets which can cost some money and the map software to learn. This article is not about which brand or unit or which brand is the best but to assist with some guidance when choosing a unit and all the mind-boggling amount of maps and map sets to choose.

Criteria when choosing your GPS unit: 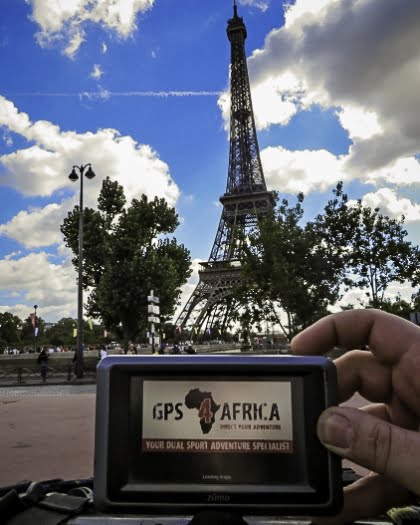 For our friend Pauli at GPS4Africa. Let your GPS route you on some exotic roads and magnificent places.

Then there’s also Tracks4Africa and OpenSource maps. Have a look at the Maps software like Garmin Basecamp for being user-friendly to make tracks and routes. Tips for devices to create tracks and routing.

Below are some motorcycle GPS navigation options available. Garmin is the best represented and offer the most units available for us. Unfortunately, over my last 18 years using Garmin they have not done much to make me a very angry customer. Their customer care and feedback are as good as zero. It is very difficult to talk to them or resolve issues.

In the past 12 years, it was Pauli our dear GPS guru friend and owner of GPS4Africa in South Africa that always went out of his way to resolve issues. We still use a ZUMO660 and ZUMO395 as there are not enough options or competition in the market.
TOMTOM is another option included here, but not that well represented and can not work with OSM maps. Kooletron and those unknown brands I am not going to waste time on until I hear long term respected reviews. 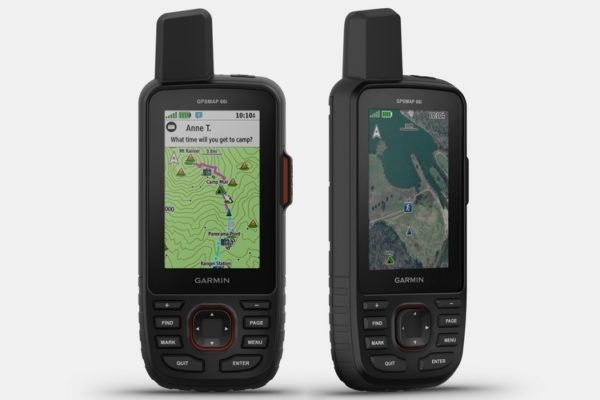 More adventure, less worry. GPS and Personal tracker all in one! 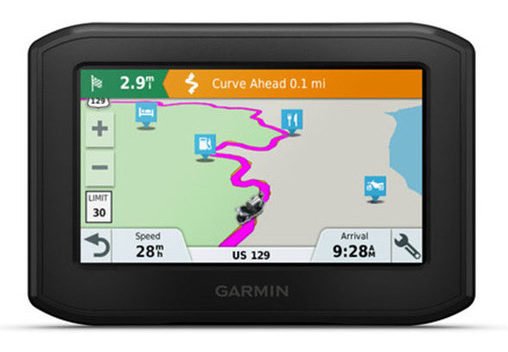 Motorcycle Navigation for the Twisty Road to Adventure.

This rugged motorcycle navigator is built to find and share the next gnarly, road-gripping adventure. The 396 will possibly replace the 595 and 395. 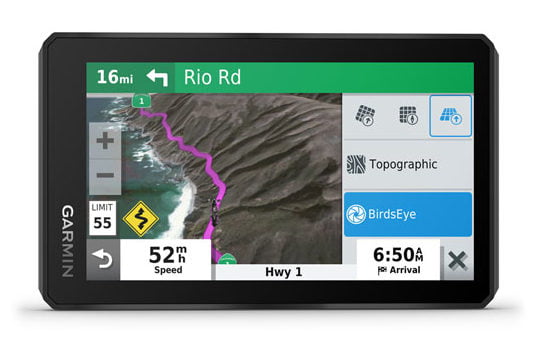 The rugged zūmo XT motorcycle navigator is built for adventure.

The rugged zūmo XT motorcycle navigator is built for adventure. Its ultrabright 5.5” display is glove-friendly, rain-resistant, and shows you the adventurous way — on and off the beaten path. 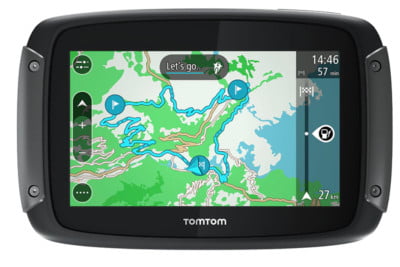 If you are in the USA or planning to ride the USA. The absolute best maps are the Butler maps. They are created with the motorcyclist in mind and especially dual sport riders. These maps are waterproof and can take a beating being used on a bike. 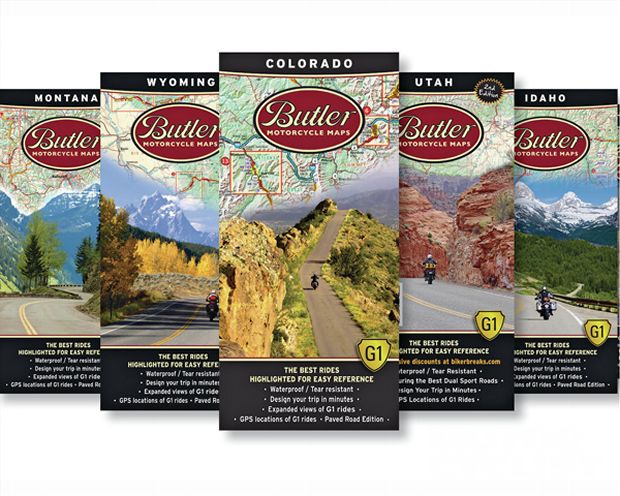 Besides the maps that come standard with most GPS units, there are also other alternatives.

Tracks for Africa: Tracks and POI for use in Africa. I am not aware of any similar mapsets for any other continent, but Tracks4Africa is the most comprehensive info sets for overlanders for Africa. Basically, if you travel Africa get this mapsets with POI. These mapsets are comprehensive for travel use and overlanding. They also now supply maps.

Maps-GPS-Info offer loads of mapsets and other maps for free. It is basic but it works.

JaVaWa device manager is a Dutch developed app that helps you load and manage maps on your GPS device. It is simple to use and works perfectly with Windows machines. There are other useful features on their site to use. PLEASE NOTE! The owner of this app last updated the app in 2016 so it might not work in Apple or other devices.

BackCountryDiscoveryRoutes are a nonprofit initiative that allows people in different parts of the USA to download dual-sport tracks in some states. There are wonderful tracks and roads to ride. All due to people contributing information.

You don’t need to leave your phone at home. There are a lot of limitations to smartphones when not able to access the net and their finicky build for adventure.

Your smartphone can still be an invaluable helpful tool for the info, serving as a pocket-sized travel guide, phrasebook, eReader, and music player, camera, video camera, torch, and even a beer guide but best of all as a GPS navigation device. Smartphones can be a huge asset to cross-border or international trips.

REVER is one the most used, just switch on, hit the TRACK button, put the phone away, and at the end of the day save and when with wifi upload to the cloud.

It cost a bit of money as a subscription but it is absolutely worth the money to save those cool tracks we have ridden. 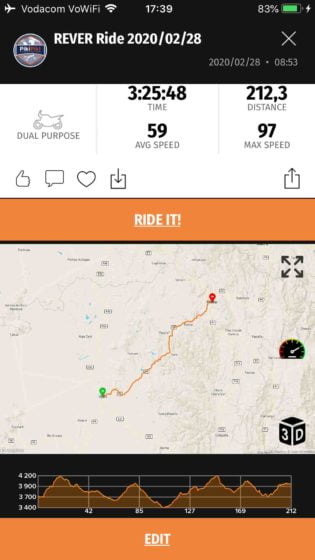 There are a few options as apps to search for places to stay and maps. IOverlander is a POI app with loads of places to stay, whether wild camp or formal camping and comments. REVER and Tracks4Africa Guide app both on Apple and Android app store. Tracks4Africa though also have POI on their app. Another tracking app worth considering is EatSleepRide which is also a tracking app but with places to sleep and eat and crash detection. 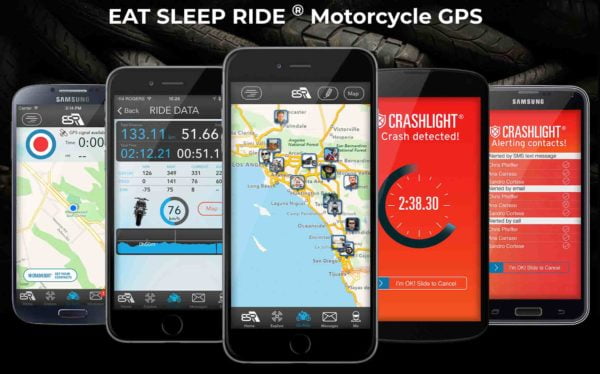 ViewRanger is another mobile phone application we use quite often. This application seemingly was made for hikers and bicycle riders in mind. For motorcycle adventure use it is as good. The way to create a new track is a drag and drop thing and very easy. And it can track the same as REVER. Both these apps do not use much power when tracking and we can go 8hrs on a track run. The map sets is easy to use and download and the app works offline. The app also allows to find, identify, and take snapshots of mountain peaks. The mapsets and details on ViewRanger is very good and I have it in good authority many of the Dakar guys use this app as some sort of backup. Don’t quote me I just heard it. 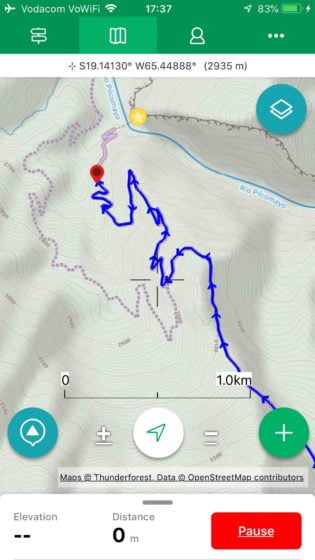 We also use Peak Finder phone application. It is an inexpensive app, but one of the coolest to have when travelling. The mountains are calling! Explore more mountains than any mountaineer! PeakFinder AR makes it possible… and shows the names of all mountains and peaks with a 360° panorama display. This functions completely offline – and worldwide! PeakFinder knows more than 650’000 peaks – from Mount Everest to the little hill around the corner. 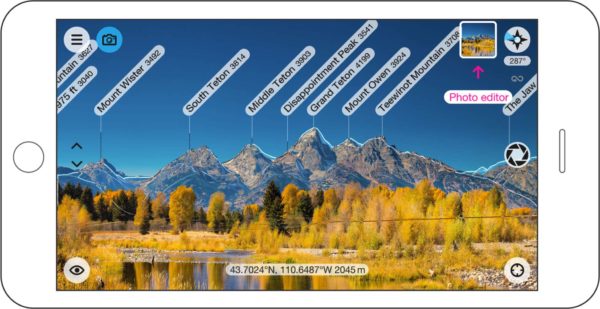 These mapsets can be accessed offline.

Look for OSM-OpensourceMaps on Playstore or internet.

Google Offline Maps. Most mobile platforms can use Google Maps. Maps will stay in memory for 30 days. With My Maps in Google, it is also possible to create a route quite accurately and then export as a .KLM file and use kml2gpx.com to convert to a .GPX to be used on a GPS.

MapsWithMe. This app will download maps — including information about local businesses. The light version on Playstore is free.

Excellent source of information is: WikiOverland From WikiOverland, the encyclopedia of Overland travel

How to look for those out of the way tracks?

Twelve, fifteen years ago the best way to get out of the way routes were to actually get to a place and talk to people. Which in itself was not always the best way as people in rural outback areas do not have up to date info on road conditions. There were Michelin maps and info from people like a local friend of ours, Neil who as a 25-year-old got a job in Angola to go map everything that looked like a road with an old Land Cruiser.

Still, to this day there are so many out of the way dirt tracks being used in many countries it will take ages to explore. Namibia and places like Guatemala have on average still 80% dirt roads. When we started in 1994 touring Namibia we used contoured maps, road maps, and local people’s knowledge for our trip.

Today we have incredible tech stuff to help find those out of the way roads. Our current modus operandi is to use Google maps and Google earth to do preliminary research.

But there are places like Lake Turkana in Kenya where Google maps show no tracks. Google maps switch between road, satellite view to see if bridges and roads actually exist. Don’t blindly trust Google maps.

Then with that, we use MAPS.ME as back up as they sometimes have tracks and roads mapped that Google does not have. They are supported by OSM Open Source Maps.

In addition, the website dangerousroads.org offers some great options to explore with detailed information. In Africa, we use tracks4africa.co.za which was started years ago by travellers sending tracks and POI’s to a dear friend Wouter and he made it into a map set that could be used on normal GPS’s. That map-sets today covers entire Africa with some of the best routes available for overlanders and Advriders.

One of the best ways is to hook up with locals in countries, but locals that actually know their stuff. In Colombia, we met Andres aka a2ruedasco.wordpress.com a local adventure rider addict with a wealth of information, tips and tracks. In Ecuador we met a local motorcycle tour group in a remote area of the Amazon at a restaurant by accident. Davo aka ecuadorbikerental.com was kind enough to share with us in a short hour some of the best routes in and around Ecuador. And tour operators normally won’t do that, they keep the best for themselves.

But the moral of the story is that locals have a treasure chest overloading with local information to be used. Maybe it is also a good thing not to share tracks, let people put in some effort to research a place rather than just piggybacking on other peoples rides. 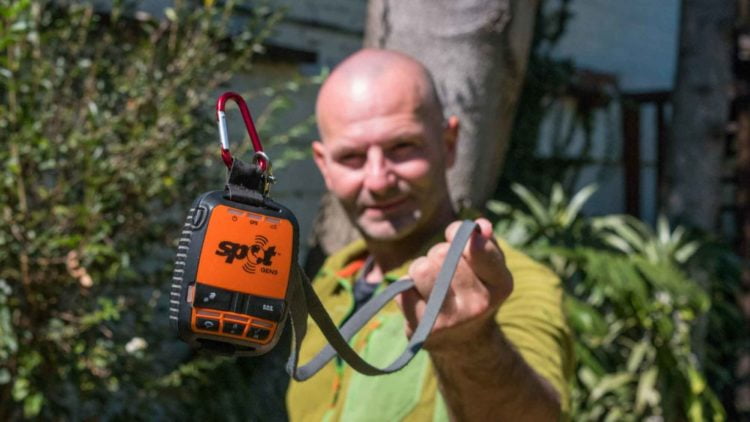 Personal GPS trackers have evolved to be thinner, cheaper, and more useful for outdoor activity and travel these days. They offer users the peace of mind to be able to send text messages and alerts to family members or rescue teams if and when things go bad. They are really useful tools for overlanders and travellers.

Please be sure to check on the cost of ownership and the fine print of each product. There are monthly subscriptions with both devices but the terms may vary. Also, make sure to familiarise yourself with the global coverage each of the products offers.

Also important is the service and back-up from these companies. Make sure to read up on as many reviews as possible.

The two most popular for motorcycle use are the SPOT GEN3 and Garmin In Reach mini both offers some excellent benefits but their payment options might not suit everybody.

Here is a super cool write up from Moto.Phil on how to integrate your SPOT device to Spot Walla.

Backroads of Ecuador: What’s It Like in South America Now

Think before you joke