This guest post was kindly contributed by The Blue Groove and was originally published here.

When Ducati debuted its Sport Classic range, in 2006, Triumph’s re-released Bonneville had been paving the retro road for half a decade. But neither the Paul Smart LE (named after the Imola-winning rider) nor the Sport (styled after the 750 Sport of the early ’70s) became the lineup staples Ducati had hoped. The follow-up release of the GT1000 a year later didn’t help. Four years later the Sport Classics were dead. What happened? 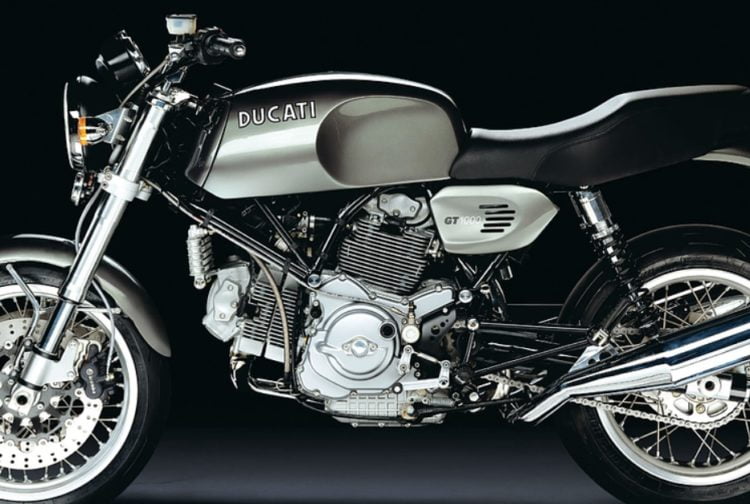 Two marketing campaigns, two drastically different approaches to selling. Traditionally slick studio photograph of the Sport Classic GT1000, where the machine stars, supplanted, a decade later, by lifestyle images where the Scrambler plays but a minor role. What’s it all mean? With the Scrambler you’re the star. All it takes is a phone, an Instagram account, officially licensed Scrambler apparel, and a sufficiently beautiful significant other. Your results, as the disclaimer unfailingly mentions, may vary.

I rode a GT from Toronto through New England to Manhattan, and it was a surprisingly good machine. Ducati’s uncomplicated, two-valve, air-cooled twin is a likeable thug, more classic American V8 in sound and feel than a big-twin Harley-Davidson. The GT’s seat was as broad as a paddleboard and as comfortable as an Eames lounger, and the riding position was the gentle forward cant that facilitates spirited riding and the effortless accumulation of miles.

Designer Pierre Terblanche suppressed his avant-garde tendencies and bestowed upon the Sport Classics an agreeable new-meets-old visage. Aided by an engine that looked old to begin with—its roots reached back to the end of the ’70s—the GT’s missteps were few; the side covers looked lost on a design that didn’t require them, and the space between the rear tire and fender—a by-product of modern 17-inch wheels—could consume a cord of firewood.

Why did the Sport Classics fail? A peculiarity of niche vehicles is the passion they inspire. Those who love them love them a lot. Mistaking enthusiasm for marketplace demand, manufacturers are disappointed when sales fail to materialize in the numbers anticipated. Or maybe the issue was lack of familiarity. Whereas Triumph’s original Bonneville was a best-seller in much of the western world—in the ’60s Triumph boasted 600 US dealers alone—’70s-era Ducatis, while often exquisite, were plagued by spotty availability and rarely seen in the wild. Perhaps the draw to an old machine (and, by extension, its modern replication) isn’t the same when the only awareness of the original is from black and white photographs in old magazines.

​At the GT’s launch, in Bologna, I asked a Ducati marketer how they envisioned evolving the Sport Classic range. Using ’70s bikes for inspiration was just the beginning, he said. All of Ducati’s back catalogue was open for reinterpretation. The range would, in time, encompass retro Pantahs and TT1s and F750s from the ’80s and, he said with a twinkle in his eye, even the 916 from the ’90s. Alas, it never happened.

Ducati’s current retro-bike, the Scrambler, was inspired by its ungainly and unloved namesake model from the ’60s. But the reference to the old Scrambler was just to pinch the name and a shred of legitimacy. The new Scrambler was never about the old one. Instead, Ducati slathered the Scrambler range in a marketing campaign as thick in fantasy as the video in which the plumber snakes the clogged drain of the Malibu housewife (who sunbathes nude) while her husband is away at a sales conference in Sacramento. Ducati’s Disneyland is called Land of Joy, and it’s a masterstroke of aspirational marketing. 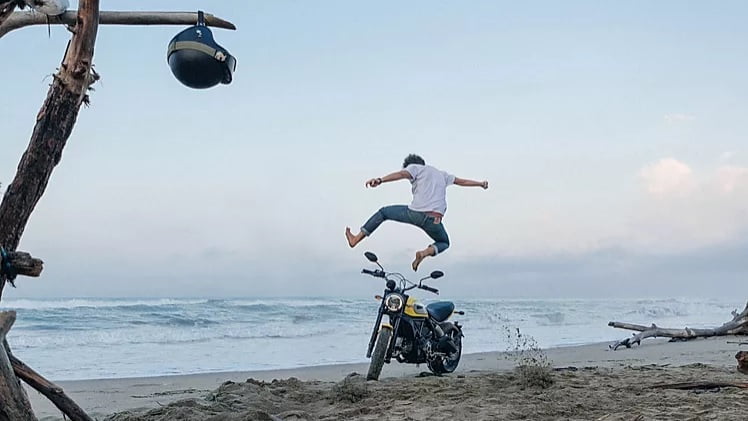 In the Land of Joy, long blonde backlit hair swirls upward from a California beach (or desert) and men have exquisitely unkempt beards. It’s a phantasmagoria of hard youthful bodies softened by the sun’s warmth. Arms fly off handlebars into the sky (mind that ditch!) and BMX bicycles vie with surfboards and skateboards for screen time in the movie version of your best life. 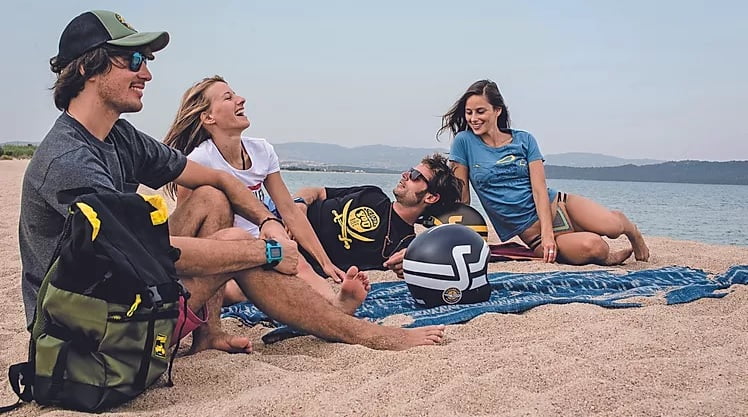 A Ducati-produced video posted to the @scramblerducati Instagram page summarizes the Land of Joy ethos. Over a pulsing, retro, vaguely Amy Winehouse-ish soundtrack, a man rides a Scrambler through the desert. Cut to a woman in white lingerie striding down a hallway. Cut back to the man, still riding. Cut to the woman applying makeup. Close-up shot on a pile of money on the bed next to the woman. Woman dresses (high boots, black pants, sheer white top) and leaves hotel. Cut to man riding Scrambler though the city. Roll credits. 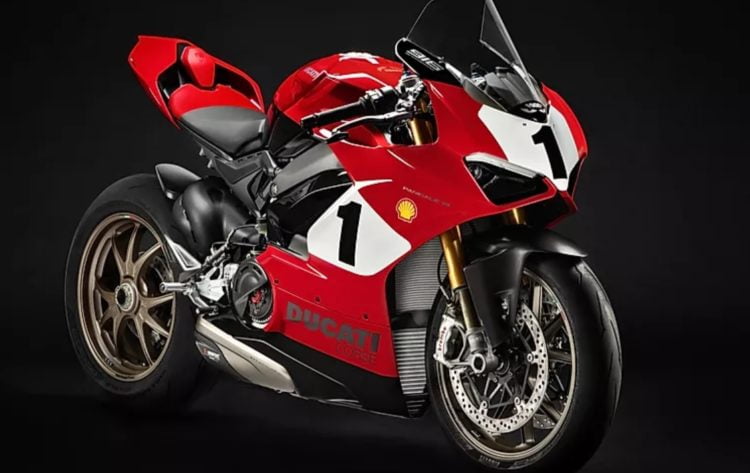 The other half of Ducati’s two-pronged approach to circa-2020 nostalgia is the Panigale V4 25th anniversary 916. If its name sounds odd, trust your instincts. The 916 was a V-twin, not a V4, and the Panigale is a different motorcycle. While we patiently await the Chevrolet Corvette El Camino Pegasus edition (half car, half truck) Ducati, shrewdly, marches on selling range-topping limited-edition superbikes at a healthy return. 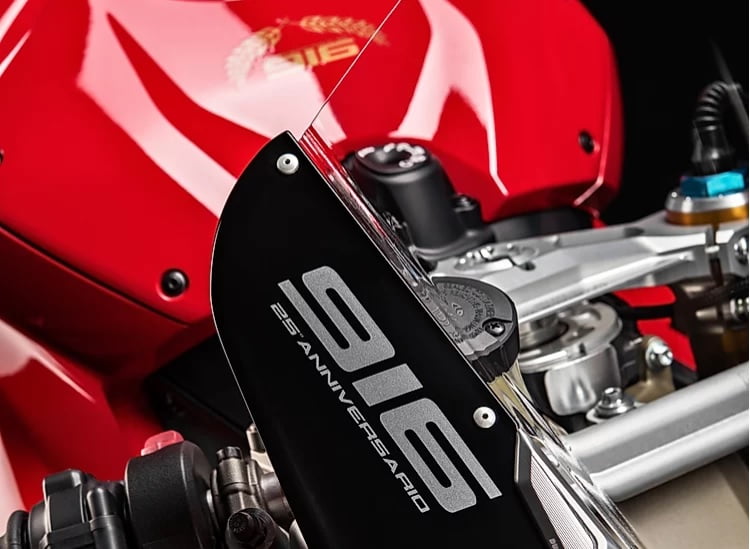 Ducati even fulfilled its plan of making a retro 916—albeit in a revised from-originally-stated manner. The 25th anniversary 916 is a limited-to-500 units Panigale V4 with gold wheels, a sticker kit, a clattery dry clutch, and a certificate of legitimacy. It weighs two kilograms (five pounds) less than the base V4 Panigale, claims the same horsepower, and, at $42,500 (USD), is a dirty weekend away from costing twice the base model. Ducati, at long last, has the retro motorcycle buyer figured out. You’d be stupid not to believe it.

Basic Bike Upgrades: What Would You Change?