Harley-Davidson (Harley) is moving towards a wider range of models.  Many perceive the MoCo as a company that manufacturers a single line of “cruiser” motorcycles.  And apparently, the MoCo thinks the time is right to broaden its product range.

Harley has already taken steps in that direction.  The brand’s LiveWire electric motorcycle is its first electric-powered motorcycle.  They now offer a line of battery-powered “balance bikes” for children to encourage new riders.

Two new machines, the Brox and Pan America are presently in the pipeline and will be released shortly.  And now, Harley is filing patents with the European Union Intellectual Property Office for both a “flat track” and “cafe’ racer” model.

Both new models will utilize Harley’s liquid-cooled Revolution Max engine that powers both the Bronx and Pan America.  But it’s not clear what engine displacements each bike will carry.  The Pan America adventure bike uses a 1250 cc powerplant while the Bronx features a 975 cc version.

The flat track version looks to be a rival to Indian Motorcycles’ FTR 1200 which has been a good seller for the brand.  It features a tubular swingarm and high mounted twin exhaust with neutrally set footpegs mounted behind the swingarm pivot.  The sharp end of the bike uses a single oval-shaped headlight that shares a resemblance to the one mounted on the brand’s Fat Bob machines.  Rounding out the headlight treatment is a small flyscreen with three cutouts or some type of aero treatment. 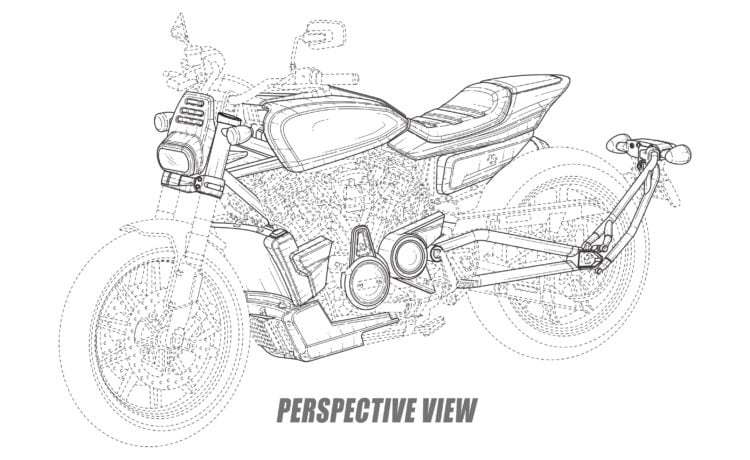 Harley’s flat track model as shown in its patent application.

The suspension is also difficult to suss out, but the front forks appear to be upsidedown units.  At the rear, we have the same problem, but it does seem to be a single monoshock. 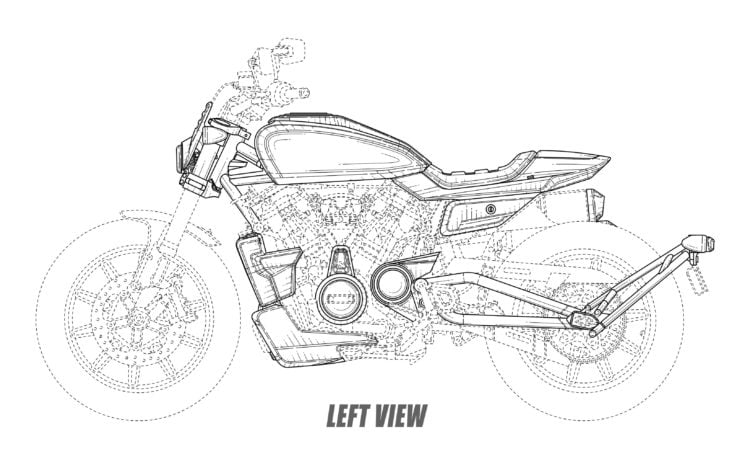 It’s difficult to see, but it appears that the flat track model uses a single mono-shock.

The swingarm is tubular.  Attached to it is a somewhat clumsy-looking license plate holder and bracket.  It looks like a last-minute add on, perhaps the production model will have something more elegant.

The bike has other small design details such as a small front fender, fairing bits and pieces around the engine and radiator, and solo seating.

On the other hand, with its cafe’ style headlight fairing and a short windscreen, cafe’ racer model sports the looks of a modern cafe’ racer.  Its exhaust system follows a more traditional low mount design culminating in a single silencer on the right side of the bike. 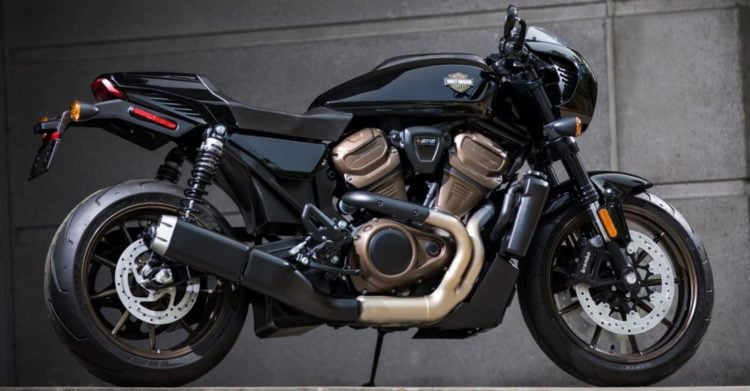 This rendering of Harley’s cafe’ racer model comes from a Harley-Davidson investor document.

Handlebar position is relatively low and is close to the top of the machine’s fuel tank.  The footpeg position is higher and more rearward than on the flat track model. 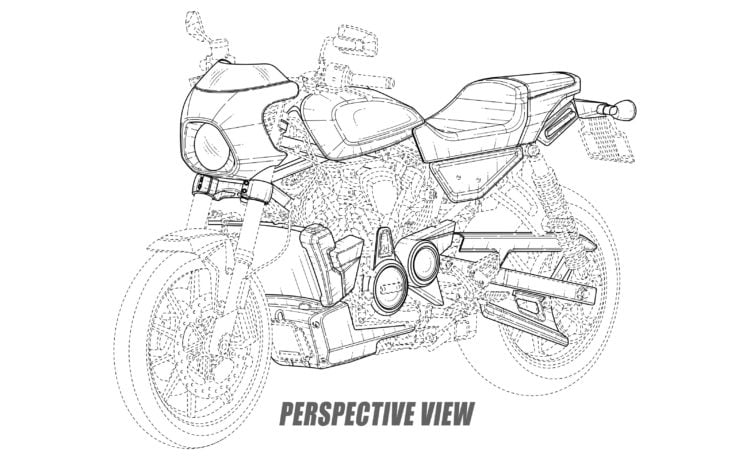 Interestingly, the cafe racer shows some commitment to passengers.  Although the seat has a cowl over the area where a passenger would sit, the seat looks to be a dual passenger unit.  It’s difficult to see, but it does look like there is accommodation for passenger footpegs just in case you decide you want to carry a pillion.  If that’s the case, the cowl covering the passenger area of the seat must be removable. 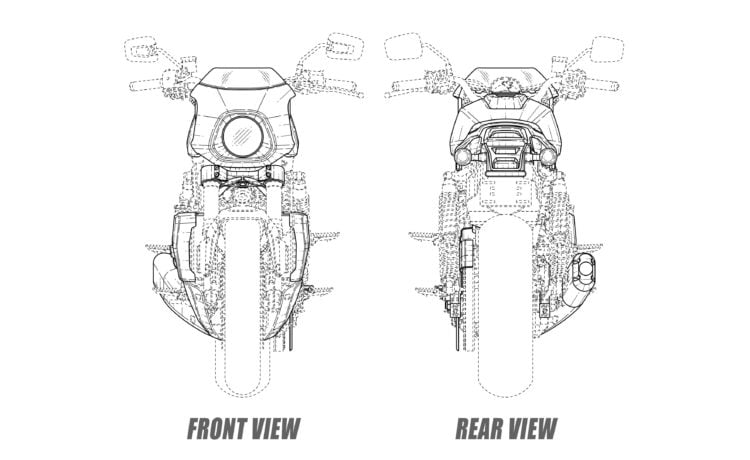 The front and rear of Harley’s new cafe racer model.

Since we only have patent drawings, it’s difficult to determine the wheelset sizes for either machine.  If we can assume that the bike drawings have similar scales, it looks like the cafe’ racer model sports a smaller wheelset than those found on the flat track model.

While two new models may not be a gigantic move by a motorcycle manufacturer the size of Harley-Davidson, it is indicative of a change to one of the world’s most iconic brands.  In a motorcycle market where manufacturers have to compete for a dwindling number of riders, change is perhaps inevitable.  And it looks like Harley-Davidson has read the tea leaves and is looking to broaden its appeal among a wider audience.

Revamping a product line does not happen overnight.  Particularly in an industrial manufacturing environment, a significant product line revision often takes years.  And it’s in this area that I have to give Harley’s now-departed CEO Matt Levatich a pat on the back.

It’s now clear that he was moving the company away from its cruiser image and into a broader and more appealing to many, product lineup.  And that takes time.  In Levatich’s case, too much time.  Particularly for Harley’s activist investors like Impala Management who claim to have forced him out.

But again, I have to give Levatich credit for moving the company towards modular platforms that make producing new models easier.  The modular platform has helped both auto and motorcycle manufacturers build new models at decreased cost and often more rapidly than traditional clean sheet designs.

KTM’s CEO Stefan Pierer grasped this concept several years ago.  With a modular concept,  Pierer has made KTM into a global manufacturer with growing sales, multiple brands, and different product lines.

Although Levatich has departed, I hope that Harley-Davidson continues to try to broaden its appeal among a broader range of riders.  The brand’s been around too long to die a slow and lingering death.