There are plenty of Harley-Davidson naysayers, but are they giving the company a fair shake? Amidst all the talk of Harley’s cruiser-centric lineup, people seem to be forgetting Harley-Davidson has tried to break out of this mold before. Need proof? How about this 1972 Harley-Davidson 350 Sprint?

Times are tough for Harley-Davidson these days. Sales are down, management is in turmoil, shareholder relations have been strained, the much-hyped lineup overhaul appears to be delayed. The company’s sales have never really recovered since the 2008 financial meltdown, despite overhauling the lineup, introducing the Street and updated Softail lines and cancelling the Dyna.

As a result, there’s a bit of a rush to jump on the “blame Harley” bandwagon. Is there something wrong with North America’s motorcycle industry? Blame Harley-Davidson, for not innovating and not selling enough bikes as a result. Considering Harley-Davidson’s market share in North America, if H-D sees a jump in sales, it’s good for the entire motorcycle scene. However, it’s not entirely true to say Harley-Davidson has never tried to branch out past the cruiser, Americana image. Harley-Davidson’s Buell subsidiary was in business as recently as 2008, selling adventure bikes and sporty naked bikes. Digging further back into history, Harley-Davidson even tried to cash in on the great off-road boom of the 1970s, with machines like this 350 Sprint. The trouble was, that move just didn’t work out well.

This might wear the Harley-Davidson name, but the Sprint was made in Italy. Photo: Street Dreams Texas

The 350 Sprint wasn’t actually made by Harley-Davidson, at least not in the US. It was built by Aermacchi, an Italian OEM that Harley-Davidson partially owned in the 1960s; Harley-Davidson bought all the company’s stock in 1974, and sold it to Cagiva in 1979. History’s sneers at the MoCo’s missteps prove that hindsight isn’t always 20/20. Harley-Davidson was actually attempting to stave off the British and Japanese competition more than 50 years ago—it just didn’t do a great job. Terrible, in fact.

Harley-Davidson put its badge on a range of small-cc Aermacchi motorcycles, including roadracers and enduros (basically, the stuff the Harley-Davidson plant didn’t do well). It seems unthinkable these days, but Harley-branded bikes were even relatively successful in GP racing in the early 1970s, under Walter Villa.

But GP racing wasn’t a big deal for US customers, and overall, the American public never fell in love with the smaller Harley-Davidson offerings, opting to buy Japanese instead. Machines like the 350 Sprint were run until they broke down, then stuffed in the back of a garage, or a barn, and left to rot. You never see them on the roads or trails anymore.

That’s what makes this 1972 model, for sale at Street Dreams Texas, an interesting catch, as it seems it fairly good nick. It’s restored, not original condition, but then, what do you expect when you see a vintage dirt bike in good shape?

You’ll find varying reports on the reliability of these old Italian bikes. Some recall them as being dodgy and unreliable, and other owners liked them enough to keep them going in the vintage racing scene. Whether you think they’re solid or shaky, there’s no denying the Aermacchi-built Harley-Davidsons are quirky. Especially this off-road version, the SX model. Anybody can see the potential problems with that horizontally-mounted engine, with the cylinder and exhaust header hanging out there with no protection, waiting to be bashed in during a clumsy log crossing. 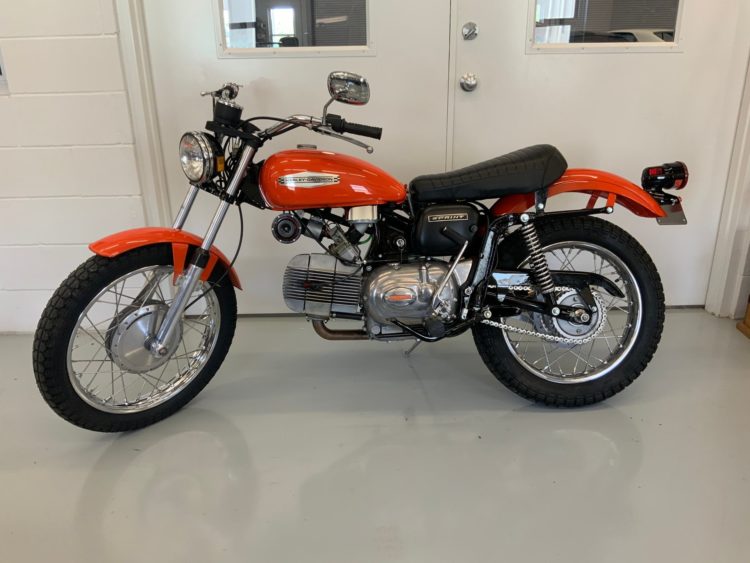 Sigh. Shifter and brake on the wrong sides, and other weirdness. Harley-Davidson could have gone so far if it had got this machine right, but nooooo. The designers screwed it up. Photo: Street Dreams Texas

Aermacchi built the shifter on the right side of the crankcase on this ’72 machine, as well as the sidestand. The kickstarter and rear brake pedal were on the left side of the engine. Even in the early 1970s, this was a bit unusual, as the Japanese arranged their bikes the opposite way, and the Brits had changed their bottom end layouts to match. Many of these bikes came without turn signals (at least you couldn’t lose them on the trail!).

The engine made OK power (roughly 25 horsepower, not too bad for that era), but the bike was heavy when compared to other off-roaders of that era, with a 312 lb-dry weight. Add in a four-speed gearbox and numerous other disappointing features, and the 350 Sprint fell behind the European and Japanese competition. It was discontinued in 1974, and Harley-Davidson walked away from the off-road segment for several years, until it bought up Armstrong’s MT design.

What really went wrong with Harley-Davidson? When you hear people denigrating Harley-Davidson, criticizing the company for narrow-minded vision, history shows the naysayers aren’t telling the whole story. Much of the company’s current image comes from its rebirth in the early 1980s, when execs had to double down on big cruisers, for multiple reasons. Before then, and since, Harley-Davidson really has tried to branch out. The problem was that its products just weren’t good enough, dealers hated selling them, or buyers poo-poo’d them for other reasons—often over a raging case of American exceptionalism. When those buyers were the only thing keeping the company alive during the hard times, can you blame the MoCo for catering to them? Slam the company’s past failures at expansion, if you want, but don’t slag H-D for not trying. It’s been trying, hard, to branch out, ever since the 1960s, and this Sprint is proof.