We all know that vehicle emission requirements are becoming more restrictive.  Motorcycle manufacturers must meet new and more stringent regulations every few years.

So it would be foolish for manufacturers not to continue to work on “cleaner” and more efficient internal combustion engines.  One potential solution is the implementation of variable valve timing (VVT).  If you are not familiar with it, VVT adjusts an internal combustion engine’s cam timing.  Once implemented, a VVT system optimizes both intake and exhaust valve timing to ensure the most efficient burning of fuel possible.

But the application does say that VVT could be used in conjunction with the crankshaft balancer that Harley is attempting to patent.  In fact, it seems that the MoCo may use VVT on more than one of its machines in the future. 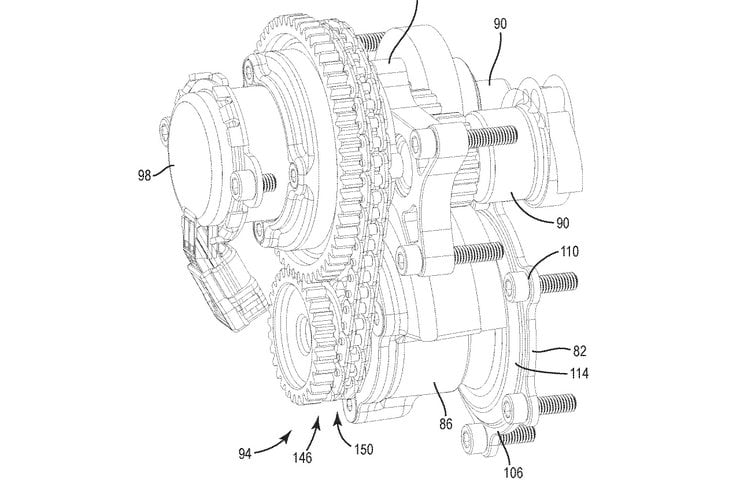 Harley’s VVT control unit is shown as item #98 in this drawing. According to the patent, the VVT can take the form of a hydraulic phaser or an electronic phaser.

More than one model

Harley puts a stake in the ground in its application saying:

So if the above is correct, you may also see the crankshaft balancer used in conjunction with VVT on other Harley-Davidson models.   That makes sense.  If it works on one model, it could work with several models having the same engine or even a different engine.

While none of this means that Harley will ultimately use VVT, it certainly sends the message that they are looking at different ways to ensure that their machines have a good shot at meeting upcoming emission regulations.

If you want to know more about motorcycle Harley’s crankshaft balancer and VVT application, check out Harley’s patent application.