The Miss Worcester Diner has been serving meals for decades.  It’s a tiny place located on the corner of Southbridge Street and Quinsigamond Avenue near Worcester Massachusetts’ port section.

The tiny Worcester diner would likely have continued serving breakfast and lunch pretty much unknown to all but the local residents who frequent the place.  But a letter from motorcycle manufacturer Harley-Davidson has recently created some media buzz for diner.

You see, about three years ago, the diner’s owner Kim Kniskern wanted to paint the airconditioning vents on the diner’s roof.  Kniskern enjoys motorcycles, specifically Harley-Davidson’s machines.  So in “homage” to the brand, Kniskern asked local artist Tony Freitas to paint Harley’s Bar and Shield trademarked logo on the diner’s vents. 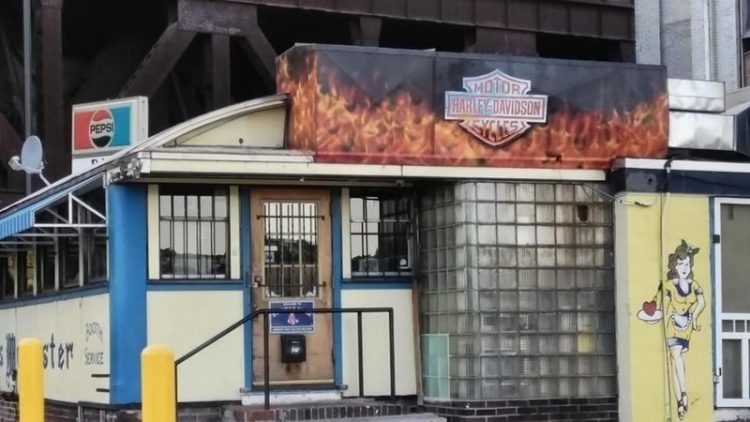 The Harley-Davidson Bar & Shield logo atop the Miss Worcester Diner. Photo credit: This Week In Worcester

As long as the logo has been there, it really hasn’t garnered much attention.  That is until an emailed picture of the logo on the diner’s airconditioning vent arrived at Harley-Davidson’s corporate office.

Kniskern then received a cease and desist letter from Harley-Davidson’s Brand Protection Team.  In part, the letter read:

“While Harley-Davidson truly appreciates your enthusiasm for the brand… we often run into enthusiasts such as yourself who utilize our Marks in commercial endeavors, however, by using our trademark on the exterior, public facing portion of your business of your business, you have created the impression that there is an affiliation or other relationship with Harley-Davidson where no such relationship exists.”

“While I do not believe that any wrongdoing was purposeful, if we were to allow this type of use to continue, we would risk losing the value of our trademarks.”

So what does Kniskern think of Harley’s letter?

“I’m more pissed at the person who took the picture and emailed it to the corporate office. I mean, who does that?”

“The sign has been there for at least three years and it’s an homage to the riding culture deeply ingrained in the Miss Worcester family.”

“We all ride. There’s always bikes in front of the diner. We’re one big riding family.” 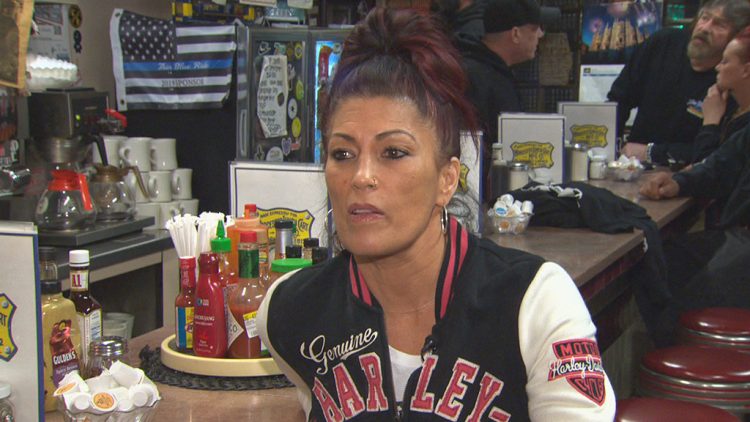 The artist who painted the logo was less than enthusiastic about Harley-Davidson’s letter as well.

“I just think they’re being kind of petty.  I can understand if I was printing stickers, making T-shirts and selling them.  But this is a tribute to them.  They love Harley. They’re Harley enthusiasts.  They’ve spent millions of dollars on Harley, on their clothes, on their bikes. Kniskern is in the Hundred Mile An Hour Club.  There’s got to be a hundred of them and they all have 20,000 bikes and they all eat here. Because they love Harley so much.  It’s a tribute.”

Kniskern says that she hopes that Harley will come around and see the mural more positively.  However, if they do not, Kniskern is going to fight.

“If they make me take it down, something even more sick is going to be up there, it’s going to look even more insane, and they’re going to be sorry they made me get rid of it.

To prove her point, Kniskern wore a Harley-Davidson varsity jacket for a photo shoot with local media.  She claims hundreds of people, including copyright lawyers offering to work pro-bono (for free) are showing their support. 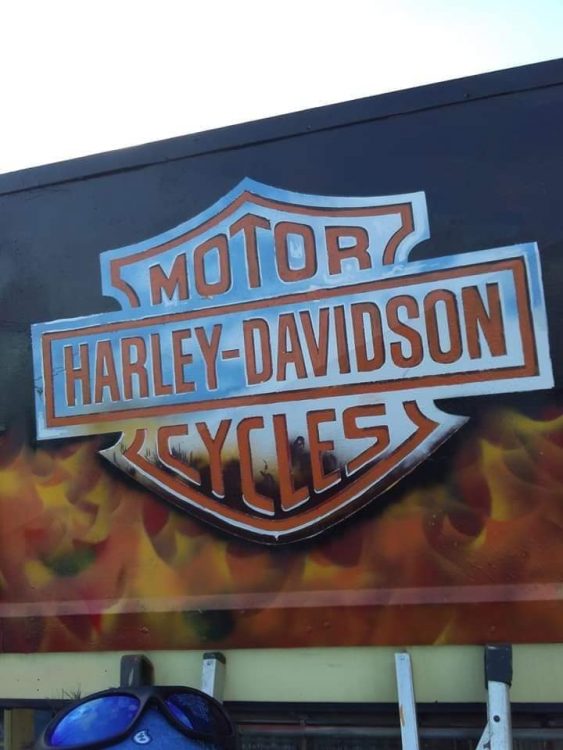 To try to convince Harley-Davidson that the mural should stay, the Worcester Heritage Society has started an online petition on Change.org

Harley-Davidson, while highly respected, is being incredibly short sighted in this matter recently sending Miss Kniskern a “cease and desist” letter with regard to removing the sign instead of seeing the true value and reverence of the sign that is actually in historical honor and reverence to the Harley-Davidson Co on this historical diner. People come from all around to take pictures in front of this Worcester treasure with the “already iconic” and much loved flaming HD sign. With the changes coming to Worcester in that area, HD doesn’t realize the value of this type of historical promotion of love – love for Worcester – love for the Miss Worcester Diner, and love for the motorcycles made by Harley-Davidson since 1903. This is for and in tribute to THEM!

What Harley-Davidson fails to understand wholly is that the Miss Worcester Diner, historical landmark and woman owned business in Worcester, is showing support for Harley-Davidson and her customers come from all over to enjoy the heritage that IS the Miss Worcester Diner and their fondness and love for the motorcycle’s, made by Harley-Davidson, also a historical USA company. Miss Kniskern is heart broken at the thought that her artistic tribute of love would be misconstrued as anything otherwise and would love to be allowed to keep this tribute of love on the duct as is.

By signing this petition, you are asking Harley-Davidson Corporation to reconsider the removal request and instead appreciate and support the Miss Worcester Diner, her customers, the community, and the motorcycle community. Please let the Miss Worcester diner keep this great, newly iconic and revered, sign for years, decades and GENERATIONS of Miss Worcester Harley Lovers to come! Thank you!

The society’s petition now has more than 2,500 signatures.

Some customers like Rita Flagg think there could be a different solution.  She said: “Is there something that has to be written near it, or around so that we’re not trying to cash in on your logo?”

Harley believes it is protecting its trademark rights and a corporation protecting its brand is important.  But does the use of the trademarked logo by the Miss Worcester Diner harm Harley-Davidson?  Or is its use merely paying homage to the brand and does not infringe on Harley-Davidson’s rights.  What do you think?  Let us know in the comments below.