Harley-Davidson used EICMA to show off their first attempt at building an adventure machine; the Pan America.  It’s a part of their “More Roads To Harley-Davidson” initiative.  The new bike is the MoCo’s move to attract riders from other segments of the motorcycle market.  The Pan America has been seen in various stages of production readiness, but this time, it’s we get a few looks at the advanced prototype machine.

The Pan America uses Harley’s new Revolution Max engine.  The engine in the Pan America is a 1,250 cc (~76 ci) 60 degree V-twin.  Not a lot of specifics have been released about the engine, but Harley says the powerplant is good for 145 HP and about 90 lb-ft of torque.  Those power figures are comparable to BMW’s R 1250 GS with 136 HP and 105 lb-ft of torque.  But until we know more about the Pan America, it’s difficult to draw real any conclusions about this machine. 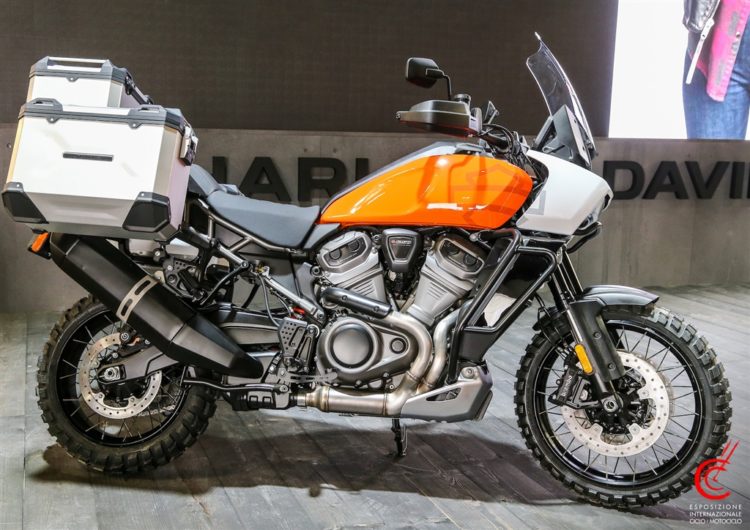 Pictures/videos from EICMA shows the machine outfitted with Adventure accessories such as a bash plate, bark busters, metal panniers, and spoked wheels.  Wheel spokes are laced into the side of rim so perhaps Harley has decided to go tubeless.

One outlet quotes Harley as saying that they have:

“tapped into the expertise of world class component manufacturers to deliver bespoke solutions for braking and tyre performance.”

That outlet also says that the brakes have been developed in collaboration with Brembo.  The collaboration has reportedly created a new radial four-piston caliper that “complements the personality of the bike.”  Umm, OK.  In addition, Harley has also reportedly worked with Michelin to develop co-branded tires.

Multiple outlets report that the bike will likely have a full-color TFT screen with smartphone connectivity, a height-adjustable windshield, adjustable riding modes, and a complete electronics suite.  The video below appears to confirm most of this; at least on this prototype.  The video also shows the bike’s right side handgrip cluster with music/media control buttons.

Looking at the released prototype pictures, the bike does not look like a lightweight machine.   It’s big, chunky and unlike anything else out there, so it appears that Harley is setting its own course.  You have to give them credit for that.

To let you see the bike in action, we’ve provided Harley-Davidson’s latest video on the machine.

Rumors have the bike available in late 2020 as a 2021 model.  Interesting times these.