“It was twenty years ago today…” No, it wasn’t, it was only 15 years back. I had slotted in a couple of free days in Hong Kong on my way to Europe, and had arranged to borrow a Harley from the Hong Kong H-D distributor, Dr Raymond Ma, to punt around the ex-Crown Colony. Ray is a top bloke, despite being a dentist, and he made it easy for me.

“Come to the shop,” he said, “and choose what you would like to ride.”

Today, H-D Hong Kong is in Kwun Tong, near the end of the old airport runway. Fifteen years ago it was in Causeway Bay on Hong Kong island. I caught the ferry across from my hotel and then the amazing two-level toast rack Hong Kong tram to the shop. There were quite a few bikes and riders milling around the shop entrance, and I remember thinking: I know Harley is popular in Asia, but as popular as this? Really?

Things got weirder when I pushed through the glass doors.

“Hey Bear, good to see you,” said Steve Wasser, “are you going on the ride?” Steve was running Asian Sales for Harley-Davidson, and had become a good friend over the years. But he had me off base here.

“Ride?” I countered smartly. “What ride?”

That’s when I found out about one of the most fascinating events in the international motorcycling calendar; the Double Discovery Ride, or the 1st Harley-Davidson China Rally. Ray had put the word out to the Chinese diaspora and other Harley riders: come to Hong Kong and ride into China on an organised tour. The response had surprised even the optimistic Ray; more than 50 Harley riders and other enthusiasts signed up for the journey totaling 1,820 km in 6 days and 5 nights of what he called “hard, fun riding”.  Many had flown their bikes to Hong Kong for the event.

There were Harley enthusiasts from all walks of life; a deputy to the National People’s Congress, lawyers, doctors, celebrities, pilots, architects and interior designers all signed up. Male and female, they came from China, USA, UK, Malaysia, Singapore, Thailand, Japan, Macao, Australia, and the EU countries, riding bikes from 883cc Sportsters to 1450cc Road Kings; Fat Boys and V-Rods.

“Exemplifying the Harley-Davidson spirit of adventure , the 1st Harley-Davidson China Rally chose a route  from Hong Kong to Shenzhen, Wuzhou, Hezhou to Guilin and back,” said Ray.

Mind you, this was not what you would call a rally in the US, or just about anywhere else. It was more like a procession, accompanied by a bus full of police; intersections were closed and entire stretches of highway were reserved for the rally. 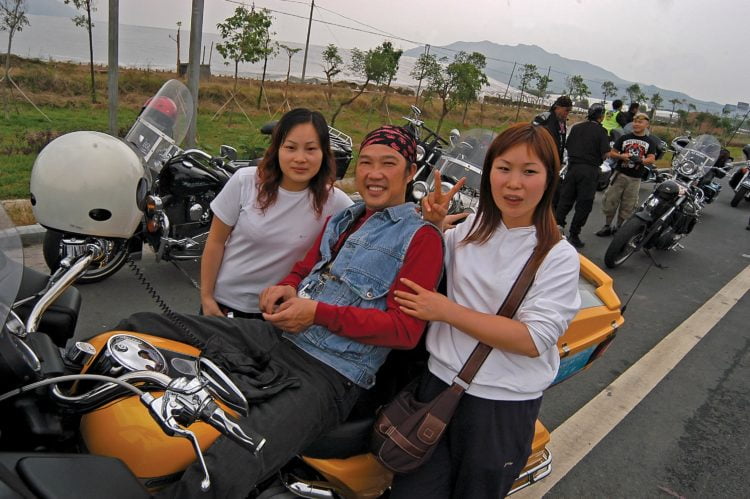 No problem with pulling the local chicks…

Guilin made good destination. A famous tourist destination known for its unique mountain landscape, scenic Li river and as a backdrop for some of China’s most famous filmmakers, it provided “some challenging terrain and an exciting, varied, riding experience for the riders: fast, broad highways, steep, winding, mountain roads and dense urban traffic.

“With special permission and escort from the Guangzhou government and police force, the 38-bike convoy safely and successfully completed its first journey in China,” Raymond Ma’s summary read.

Participants obviously loved it. “Riding my Harley is where I can feel relaxed and experience the pure freedom of the open road.,” said Natasha, one of several female enthusiasts on the ride.

“When traveling along the Li River and the Elephant Trunk Hill, Reed Flute Cave, we were deeply enchanted by the beautiful scenery.  It is a truly an exhilarating experience,” said Ray, who despite being a longtime Hong Kong resident was riding in China for the first time. 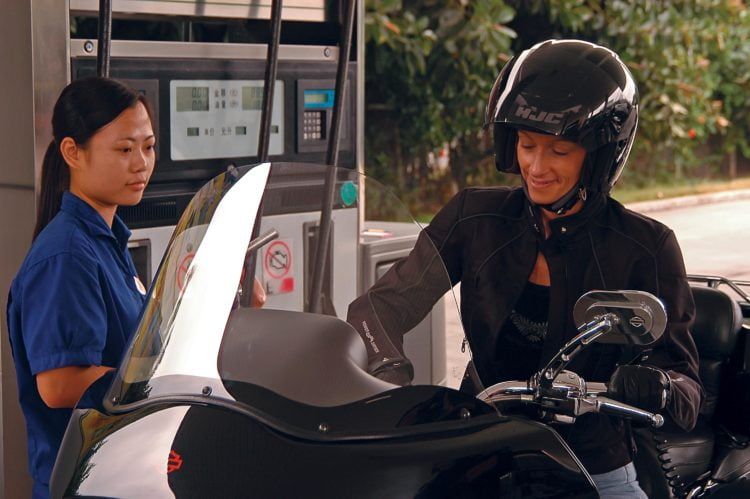 Natasha enjoyed the trip at least as much as the male riders did.

In Chinese style, the rally was described as a “double discovery”.

“Throughout the journey,” Harley-Davidson’s report of the rally said, “Chinese citizens were thrilled with the sight of Harley’s on their roads – the crowd’s reaction was tremendous, while Harley riders from around the world were thrilled to experience the food, hospitality and beautiful landscape of Guangzhou province.  In other words, in favor of the local tourism industry, this rally has presented the unique tourism resources and potentials of Guangdong and Guangxi provinces to the world.”

“It is our pleasure to be the hosting city of such a wonderful riding event. Guilin is a wonderful place and the Harley-Davidson convoy is warmly welcomed,” said a Guilin policeman. Sadly, the attitude of the Chinese government to motorcycling has changed since then, and bikes have been prohibited in many cities. 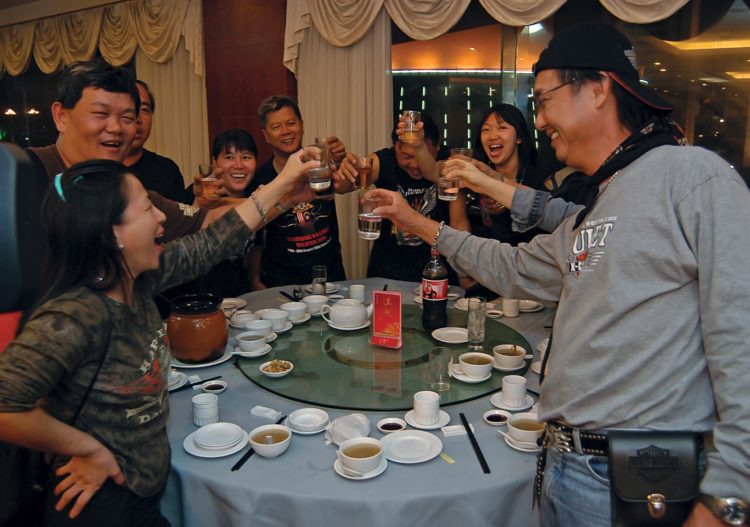 That’s not water in those glasses…

But who knows? Chinese tourism officials have made much of their interest in attracting members of the enormous Chinese diaspora around the world. Using Harleys as a vehicle to do that would seem to be a winning stratagem. And if nothing else, the authorities in Beijing are pragmatic about achieving their goals.

I didn’t have time to go on the ride to Guilin back in 2015, even though Steve Wasser offered me a bike. If the offer were to be repeated today, I’d sign up without a second thought. Europe could wait.