They say that determined and brave people have a “heart of a lion”.  If that’s true, Nicola Dutto possesses such a heart.

Nicola is no stranger to motorcycle competition.  In his professional career, has won numerous events with major highlights coming in 2008 and 2009.  In those years he won European Baja Championships. 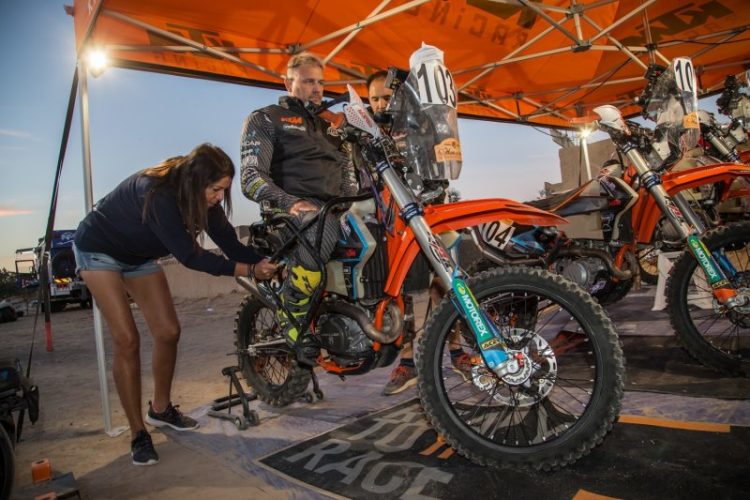 But on March 20, 2010, Dutto was critically injured and paralyzed from the waist down from a crash during the Italian Baja in Pordenone.  Most would think that he would never race again.

After months of rehabilitation, Dutto’s name was on the entry list the following year for the Baja 1000.  This time, he would not be on a motorcycle.  For this event, he entered as a buggy racer.

During the race, the buggy experienced a transmission belt failure which he could not repair.  While sitting in a dry riverbed all night with his co-driver waiting for assistance to arrive, Dutto made a decision.

“The problem was aggravated because we just couldn’t replace the belt on site. The belt was behind my seat, so it was impossible to get to. We waited for assistance in that riverbed all night. I had made up my mind right then and there; this never again. Four wheels mean trouble. So, I needed to get myself back on two wheels.” 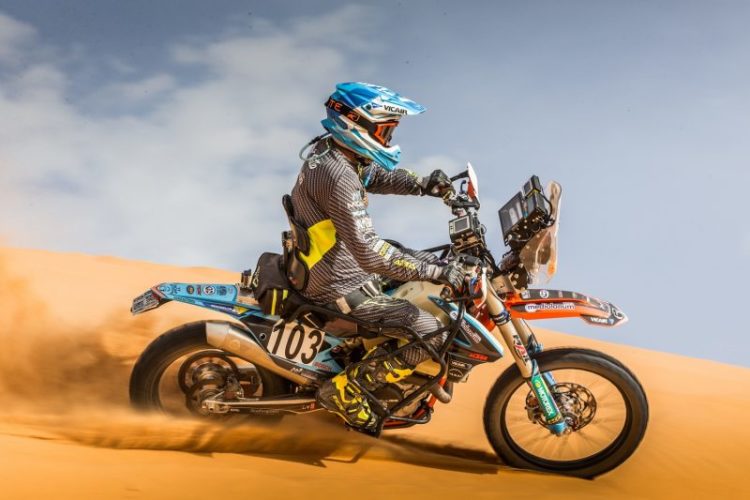 In his mind, there was no stopping him from returning to motorcycles now.  Doug Henry, a three-time AMA motocross champion was his inspiration.  Henry had also been paralyzed in an accident.  Doug had created a roll bar cage around a bike and demonstrated that it was possible for paraplegics to get back onto a motorcycle.

Not long after, Dutto was prepared to ride again.  His first attempt was terrifying.

“I felt like such an idiot getting back on a bike again. I was terrified too. We had mounted sort of like training wheels to the bike and at first I went completely pale at the thought of actually riding it. What had I gotten myself into. But a few hundred meters in, I found my balance again. I was certain then I was going to ride again.”

Ready To Ride After Four Months

It was only a four months after that ride, that Dutto entered and finished 24th in the Baja Aragon.  Having proven to himself that he could race on two wheels again, Nicola set his sights on different competitions.

“Before my accident Bajas had been my main focus, but since it, I’ve been seeing new opportunities everywhere I look. Like the Dakar. It was never a dream for me like it is for most, but to me racing the Dakar is like taking part in the Olympics. Three years ago, while watching the race on TV, I thought to myself why not do the Dakar?” 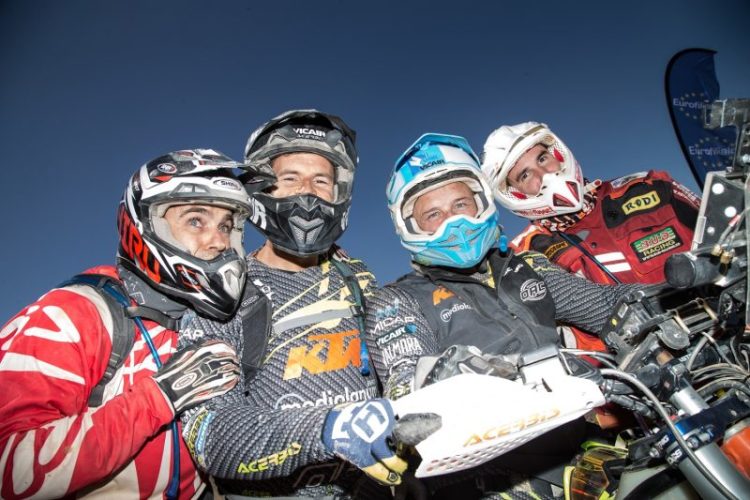 With the Dakar Rally now on his agenda, Dutto had to think of ways to ensure that he could participate and finish.  Many Darkar riders have a team supporting them.  Especially because of his physical limitations, Dutto would require support as well.

Most Dakar motorcycle competitors will fall during the event.  Some will fall many times and Dutto realized this.  So he had to figure out a way to get going again if he fell.  Enter his “ghost rider” team companions.  Some of his previous racing adversaries decided that they would team with and provide support to Dutto during the Dakar.

His newfound team members consist of Pablo Toral, Victor Rivera, and Julian Villarrubia.  They will provide the assistance that Nicola needs.

We will start the Dakar Rally as a four-person team. One rider will ride in front, because I can’t just stop to have a look around, to see where I’m supposed to be going. He guides me onto the right trails up a dune for instance. He’s also the one to ‘catch’ me when I have to stop for fuel or when I reach the finish line.

The other two riders follow in my wake. In case something goes wrong, they’ll be there to pick me up. As I’m tied to the motorcycle it’s important having the two of them, because it’s not just the bike they’re picking up, but the roll cage and myself with it. For me it is even more important than it is for ‘normal’ riders to have a team I can rely on; it has to feel like a family. I am fortunate to have three incredible ghost riders – guys I’ve known for a very long time. They used to be my adversaries in the Spanish Bajas!” 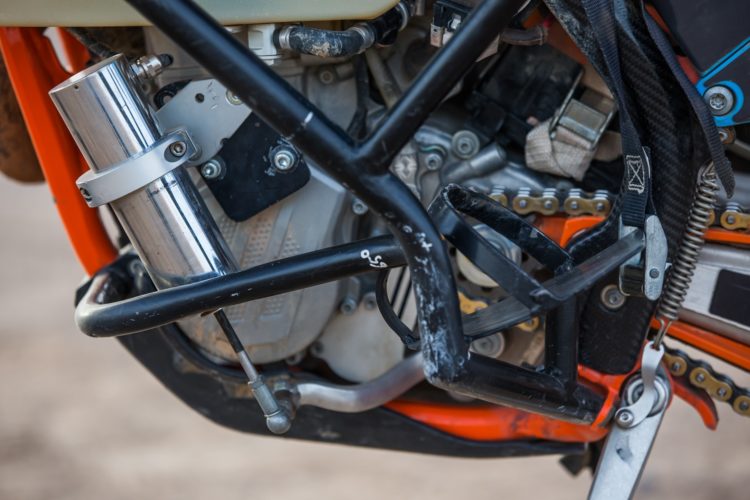 Paralyzed from the waist down, Dutto can’t fully use conventional controls.  His KTM 450 EXC-F has been transformed extensively.  His bike is now equipped with an electronically controlled shifter and an automatic Rekluse clutch.  The rear brake master cylinder has been moved to the handlebars as well.

Nicola’s legs are secured to the bike and protected by a “roll cage” framework.  A specialized seat with a backrest and a 3 point harness ensure that Dutto stays on the bike.

When asked about the current bike, Dutto said:

“Comparing my current Dakar bike to the bike I first built to get back on two wheels, you could say a lot has changed. On the old bike the roll cage was pretty big and bulky, where on my new bike it’s brought back to a very minimalist design. It allowed us to shed quite a bit of weight from the bike, which helps controlling the motorcycle. It’s also worth noting the engine of the KTM enduro is a lot better, too. Engine characteristics and the fact it has a six-speed gearbox is perfect for me.”

With his physical limitations and this many changes to the bike, Nicola has had to adapt his riding style.  He now manages many controls through the handlebar.  Weighting or unweighting the pegs to turn or jump is now out of the question.  But even with these changes, Nicola says that riding without his legs now feels normal.

It’s pretty difficult explaining how I have to ride a bike now. It is a very involved manner of riding, and it has taken a lot of time to figure out what works and what doesn’t. Working on getting the suspension to work for me was interesting, because I’m unable to stand up to take the blows anymore.” 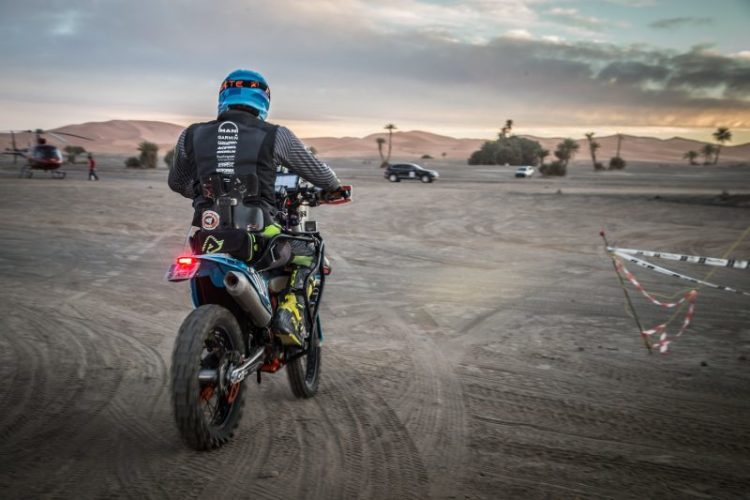 Saying that Dutto has been through a lot would be a vast understatement.  Hours and hours of physical therapy, training both on and off the bike and entering and finishing qualifying races have led Nicola Dutto to the Dakar.

Having to endure what Dutto has endured would leave many falling to the wayside.  But that’s just not Nicola Dutto.

“I consider myself a happy man, not just because I’m still alive, but also because there’s still so many projects left to do for me. In 2013 my good friend Kurt Caselli lost his life. That was hard to swallow, but at the same time it made me more determined in making the most out of life. Look, the accident left me with two options. I could’ve looked back, thinking about the time when I could still walk, but that wouldn’t have gotten me anywhere. I decided to take the second option, because when I’m on a bike or when I’m skiing – another passion of mine – I’m always looking ahead. And that is how I’m living life with my paraplegia, too.”

The Race Is On

At the time of this writing, the Nicola Dutto is racing in the Dakar.  He is presently placed in 113th position 9 hours and 16 minutes off the lead.  Good luck to you sir!  You have already won the Dakar. 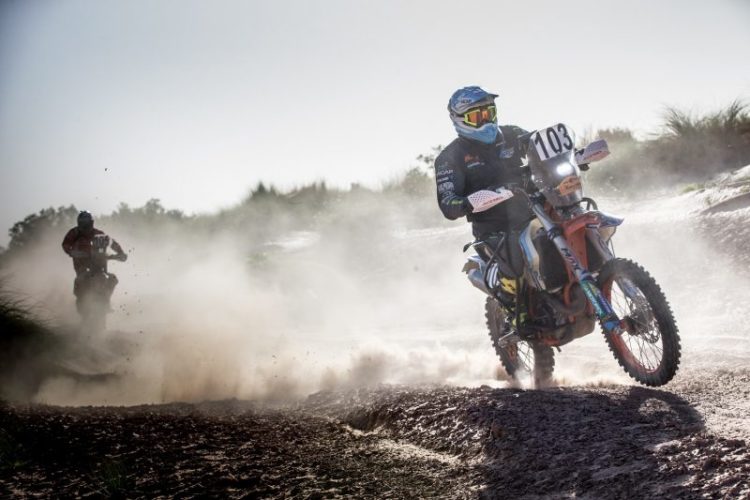 For day by day Dakar coverage, visit ADVRider.com and look for Posts listed under Dakar 19 by Egle / EvergreenE.