German tire manufacturer Heidenau is updating its line with a new offering aimed at riders in colder locations. 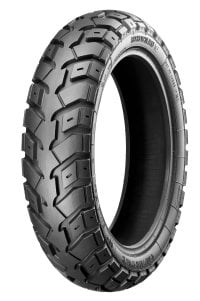 The tread on the new tire seems to be basically the same as the original K60 Scout. Photo: Heidenau

For 2020, Heidenau has announced it will offer the K60 Scout in its Cold Climate compound, but only in one size, 150/70-17. Aside from the different compound, Heidenau says this tire will be the same as the standard K60 Scout (“The same sturdy belted construction has been used, ensuring the dependable performance off-road riders expect“). However, it won’t be as long-lasting as the current K60; Heidenau says “It is possible some riders might see a reduction in mileage of about 10%.” So, you’re giving up some of the longevity in exchange for more grip.

The new tires will be available in January, and won’t replace anything in the current lineup—they’ll just be offered as another option. Heidenau hasn’t come out and called them “snow tires,” because it already has the K60 S for that market. Instead, Heidenau says the new tires are designed to offer more traction to riders in “colder conditions.” Some K60 Scout users have been complaining about their tires’ performance on cold, wet days, and this is Heidenau working to address that issue.

Heidenau hasn’t included the new tires on its website yet, or given any idea when we might expect other sizes to go with the 17-inch rear. Pricing is likely going to be close to the existing 150/70-17 K60 Scout (currently selling for $194 at Revzilla). Presumably, 18-inch rear sizes will come along sooner or later.