Just about everywhere in Europe, in and outside the EU, the law requires that you wear a motorcycle helmet that meets the ECE 22.05 standard. To be precise, that’s in Albania, Belgium, Bosnia/Herzegovina, Bulgaria, Denmark, Estonia, Finland, France, Greece, Italy, Croatia, Latvia, Lithuania, Luxembourg, Montenegro, the Netherlands (where adding any lights to your helmet or clothing is likely to become illegal because it confuses drivers), Norway, Austria, Poland, Portugal, Ireland, Romania, Sweden, Switzerland, Serbia, Slovakia, Slovenia, Spain, the Czech Republic, Hungary, Great Britain and Northern Ireland.

In Great Britain and Northern Ireland, you may also wear a helmet that meets British Standard BS 6658:1985 and carries the BSI Kitemark, even if it does not comply with ECE 22.05.

The other major exception is Germany. According to the ifz (Institute for Two-Wheel Safety), the following applies to Germany: “The helmet must have been specially made for motorcycling. The design must take sufficient account of the special forces and accelerations that act on the motorcyclist’s head during a fall. In case of doubt, it must be clarified in each individual case whether there is actually a sufficient protective effect.”

To be frank, that sounds dumb to me (why would you not simply specify a ready-made standard?), but the German authorities seem to understand that they’re created a problem, and do say that “It is… recommended to wear a safety helmet built, tested and approved in accordance with ECE Regulation No. 22”. 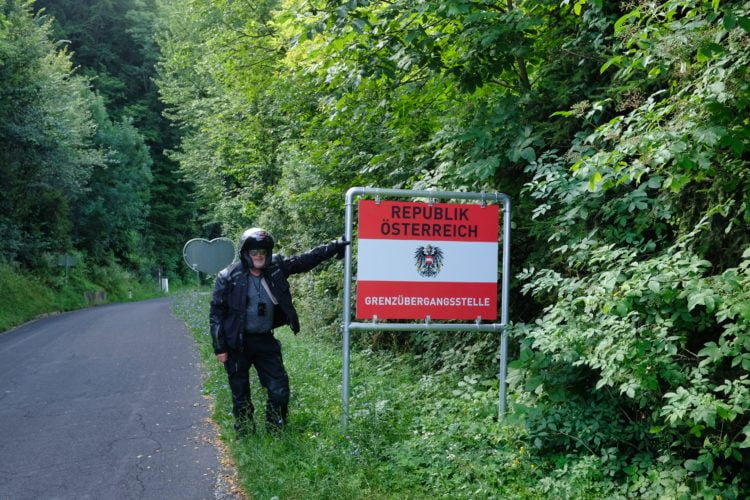 Helmet laws may change at borders; be careful because this is an obvious place for police to check.

What if you’re wearing a helmet that’s legal in your home country, but is not identified as meeting ECE-22.05? The identification is a circle on a label, usually sewn onto the retaining strap, with an ‘E’ and a number in it. The number just identifies the country in which the helmet was approved, but the ‘E’ must be there. So what of helmets that meet, say, the American DOT or Snell standards, or helmets that appear to be identical to the ones sold in Europe, but without that ‘E’ in the circle?

They are not legal in the EU or those other European countries, except Germany and, of all places, Turkey. That information comes from the US Armed Forces, and in particular the Air Force, but if you read the quotes below, you’ll see that it applies to civilians as well. 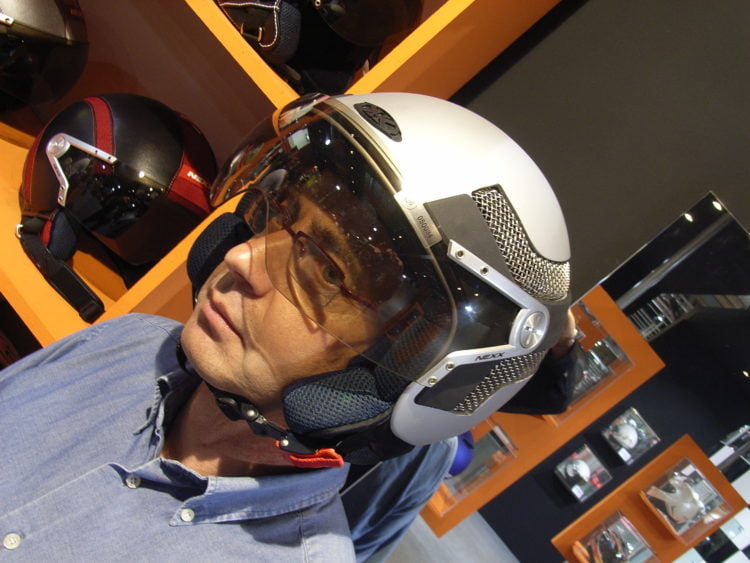 Cool helmet in more ways than one, and yes it’s approved for wear in Europe.

US Armed Forces personnel riding motorcycles in Germany must wear: “A helmet properly fastened under the chin. Helmets must meet the standards set by the American National Standards Institute, the Snell Memorial Foundation Standards, the ifz (Institute for Two-Wheel Safety), or the Economic Commission of Europe for bicycle helmets.” I presume that by “bicycle” they mean “motorcycle”; please correct me if I’m wrong.

But the most definitive answer to this question comes from the document “Motorcycle Safety for Airman (sic)” issued by Ramstein Air Base in Germany: “…with exception of Germany and Turkey, U.S. personnel wearing helmets which only meet DOT standards are not in compliance with the laws of most of the countries in Europe.”

And what’s good for the Air Force is good for civilians. “U.S. military personnel, members of the civilian component, and the dependents of both are generally fully subject to host nation laws where they are stationed (including motor vehicle laws) …” said no less an authority than Randy Harshman, (USAFE) special assistant for NATO legal affairs and International Law chief. The law’s the law; civilian, flygirl or flyboy. I know it doesn’t literally say that, but that’s what “fully subject to to host nation laws” means – they’re applicable to you, too, and you’ll need an ECE 22.05 approved helmet unless you’re in Germany or Turkey. 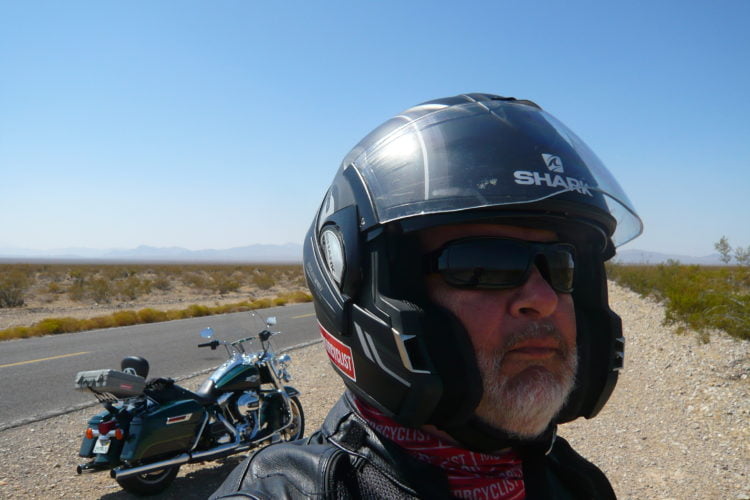 Check your travel insurance; it may require you to wear a helmet that’s legal in the country you’re visiting.

What about the rest of the world? Australia allows helmets that meet the Australian, Australian/NZ and ECE standards. DOT and Snell-approved helmets are not permitted… but I have not been able to get an authoritative ruling about international visitors. I have the impression that you may wear any helmet that’s legal in the country which issued your motorcycle licence.

But frankly, if you have a smart, new-looking helmet you should be all right just about anywhere except maybe in Italy, where helmet checks are a bit of an obsession with the cops. Oh, and make sure you don’t have any extra lights on your helmet in Holland.