Traditionally, motorcyclists have used tents for camping, but what if you’re tired of sleeping on the ground? Easy: Buy yourself a hammock.

I’ve been hammock camping for a few years now, and the one I’ve used the most is my Hennessy Deluxe Explorer A-Sym Zip. That name is a bit of a mouthful (currently, Hennessy markets it as the Explorer Deluxe Zip XL), but there’s a lot of features to describe here.

The Hennessy Deluxe Explorer A-Sym Zip hammock is more-or-less designed to replace a tent. You pitch the hammock between a couple of trees, throw the rainfly over it, stake it out, and there’s your sleeping quarters. Obviously, you don’t have some of the capability of a tent; you’re not going to be hanging out with your friends inside, and you don’t have quite the same privacy either.

What you do have is a bit more flexibility and comfort, at least for some users. The thing with a tent is, you need dry, level ground to set it up, preferably with soil that’s loose enough for tent pegs, but not so loose that the pegs fall out.

With the hammock, you can string it up anywhere you find trees that are the right distance apart … or sign posts … or rafters in an unfinished construction project … or the chainlink fence behind a big box store … you get the idea. Having a hammock opens up a lot of camping opportunities, if you’re willing to think outside the box. And if the ground’s a bit bumpy, or soggy, it might be a little inconvenient, but it’s certainly not a dealbreaker. 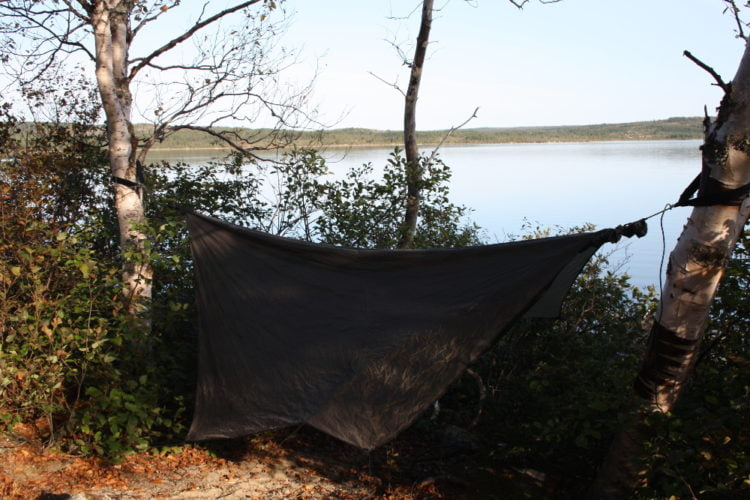 The rainfly does a good job of keeping out the weather, but if it’s windy, you need to be careful how you pitch it. Photo: Zac Kurylyk

There’s an insect net sewn to the top of the hammock, which is essential here in the northeast.

This version of the Explorer is rated for 300 lb (136 kg), and will comfortably hold a six-foot-tall sleeper (it’ll take someone up to seven feet tall). It weighs 3 lb, 3 oz., and if you use the included stuffsack, it packs up to roughly 5x8x12 inches.

So how well does the Hennessy Deluxe Explorer A-Sym Zip work in this role?

Pretty well, or I wouldn’t be using it regularly.

When I got my Hennessy, it came with an oversized hexagonal rainfly, a set of “Tree Hugger” straps (included so the hammock lines wouldn’t cut into tree bark) and a set of “Snake Skins” (which are basically a tubelike stuff sack for the hammock).

Pitching the Hennessy isn’t as easy as some other hammock brands, but once you’ve done it a couple of times, you quickly get the hang of it. Hennessy’s instructions come with diagrams for fancy Boy Scout knots that make it easier to adjust the line tension, but as I spent years on commercial fishing boats, I use the knots I’m comfortable with from that background. Basically, you wrap the Tree Hugger straps around the trees at each end, then run the hammock’s guy lines through loops sewn into the Tree Huggers. Tie your knots, then tie out thehammock’s guy lines at the sides of the Hennessy. Clip the rainfly at either end of the hammock, and tie out the fly’s guy lines. Done! You can see Tom Hennessy, the hammock’s designer, show it off below:

A quick look through YouTube finds plenty of other videos showing tips and tricks for hammock setup.

But wait, what if there’s no trees where you’re going? Or they aren’t suitable—too small, or too far apart?

Some riders will actually use their bikes as one anchor point for the hammock, and you can always find a road sign or power pole or something to tie the other end off to. Or, you can use it as a tent; put a ground sheet under it, and use the lines to keep the hammock’s fabric off you while you sleep. I’ve done this before, and I found it unpleasant, but it was better than sleeping out under the rain. You can also use it as a makeshift insect net like this, if you’re staying indoors but your cabin is full of bugs.

Some of Hennessy’s designs use Velcro closure, and you enter those hammocks via a hole in the bottom. The Explorer’s side-zipper opening is, in my opinion, far better, although the zipper is a potential failure point down the road. Once you’re in, you sleep diagonally in the hammock, on your back, with the fabric sort of cocooning you. This sounds unnatural to North Americans, especially to those who like to sleep on their stomach, and in your first night or two, you might not adjust to the position well. But once you’re used to it, or you’re properly worn out (a 12-hour day in the saddle helps!), you’ll find the Hennessy is incredibly comfortable. Or at least, I sure did, and so have my friends who’ve used Hennessy products. No longer are you schlepping it on the ground, with rocks digging into your back! Instead, you’re swaying gently in the breeze in the greatest comfort. 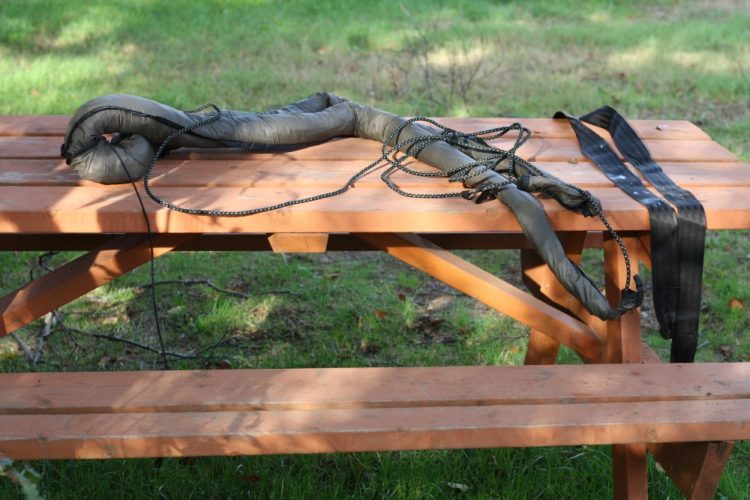 The hammock compresses into a pair of tubular stuff sacks that Hennessy calls “Snake Skins.” These make it easy to set up the hammock quickly. Photo: Zac Kurylyk

This asymmetrical design is actually patented; Hennessy’s website says “Because tree spacing is always different, the curve of a hammock is always different. The patented structural ridge line ensures the same shape every time you set up your hammock. This is the first time in history that you have the exact same comfortable bed every night and a perfect setup every time.” There is indeed a notable difference between the Hennessy design and other hammock configurations. when you’re sleeping in them.

The stuffsack is the only part of this package that I’ve managed to ruin; it blew apart at the seams a couple of years ago. The rest of it is still running strong eight years after I got it. There are a few holes in the rainfly from campfire sparks, but they’re small enough they don’t even leak during a downpour.

Speaking of downpours, you can fit a lot of gear under the large hexagonal fly when it’s raining. And you don’t have to sleep next to your grotty boots, like you would in a smaller, cheaper tent. However, if you don’t pitch your rainfly properly, you can have trouble with wind blowing precipitation in sideways. In fact, wind is generally unpleasant when you’re hammock camping, unless you’ve pitched the fly carefully, as it cuts through the bottom of the hammock and cools you down quickly.

Hennessy sells a heat-reflecting bubble pad that cuts down on heat loss through the bottom of the hammock, but there are other options as well: an underquilt (basically a blanket that ties to the bottom exterior of the hammock), or sleeping pads are the common solutions. Without something like this, you’ll be in for some cold nights in a hammock, as the hammock compresses the insulation in the bottom of your sleeping bag. 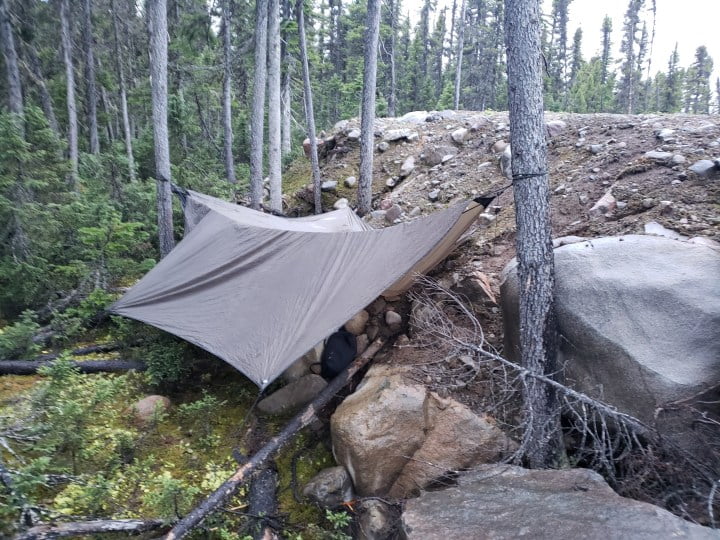 Here’s an example of how you can pitch a Hennessy in the worst of terrain. Photo: Zac Kurylyk

So should everyone buy one?

There are advantages to tents and advantages to hammocks, and definitely there are advantages to just sleeping in hotels and motels. But the hammock is a good way to camp in rough country, although maybe not so pleasant in rough weather. I still use a tent occasionally, so I won’t tell you that the hammock is the ultimate solution. But it’s what I usually grab when I’m packing. It’s compact and comfortable, and for warmer nights from late spring to early fall, it’s typically my go-to.

Pricing for the Hennessy Deluxe Explorer A-Sym Zip currently starts at $199 US, and rises as you add optional bits. Find out more at Hennessy’s website.