Well, okay, Leo, but there is more to it. Let’s take a look at some of the options for happy sleep around the world. My target here is the more or less average rtw rider: not broke but not flush either, camping part of the time. I understand that this information might not seem terribly timely with the virus and all, but the world will open up again someday – and you’ll be ready! What’s more, you may be able to use some of these tips when travelling in your own country.

I’ve had some interest from European and Australian inmates re accommodation in the US, and I’ll address (see what I did there?) that in Hints for Happy Sleep 102.

Let’s start with my own country, the Land of Oz. Once upon a time, Australian pubs were required by law to offer accommodation. That seems to have slipped a bit, but most country pubs will still have reasonably priced rooms. You’ll be sharing a bathroom and toilet, but your host will probably have somewhere to lock up the bike. There may be provision for camping, and often that’s free along with use of the toilet and bathroom as long as you eat/drink at the pub.

Motels will be two steps up, one down: you’ll have an ensuite and wi-fi but there may be no secure bike parking. Availability will be down and cost will be up in school and public holidays. 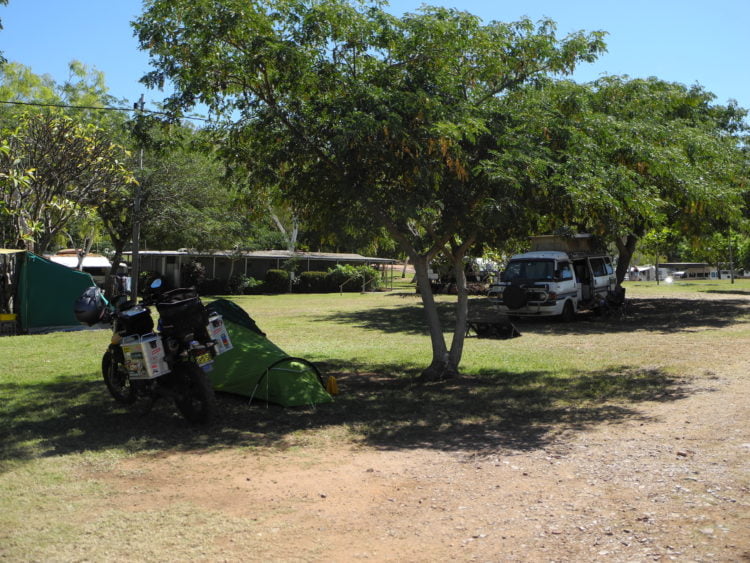 Australian campsite near Kununurra’ diamond mine.

f you’re travelling somewhere remote like across the Nullarbor Plain, accommodation will be scarce, expensive and often booked out. A uniquely Australian concept here is the ‘donga’, most often a shipping container that’s been turned into a portable motel room or rooms. Camping is your other friend here. It is generally easy to find a campground; over most of Australia these are run by the local council and prices are reasonable. Facilities, often including a kitchen, will generally be clean but security will be basic – partly because little more is needed. Free camping is possible, but do check with the owner of the land if you can find someone, and always leave gates the way you find them.

Staying in the city? Youth hostels are a good bet with reasonable prices and will have wi-fi. There will, however, usually be no secure bike parking and not much opportunity for street parking either. I have had to use a parking station, which is expensive. Using Airbnb might get you safer parking options.

New Zealand is similar to Australia, except in two major ways. Most motel rooms will have a kitchen, which can cut your costs, and many small towns will have a Domain. This is a patch of grass, usually equipped with a toilet and some other facilities which you may be sharing with a sports oval. It is often free to camp there. Kiwis are great travelers, so accommodation will be even tighter in school and other holidays than in Australia. 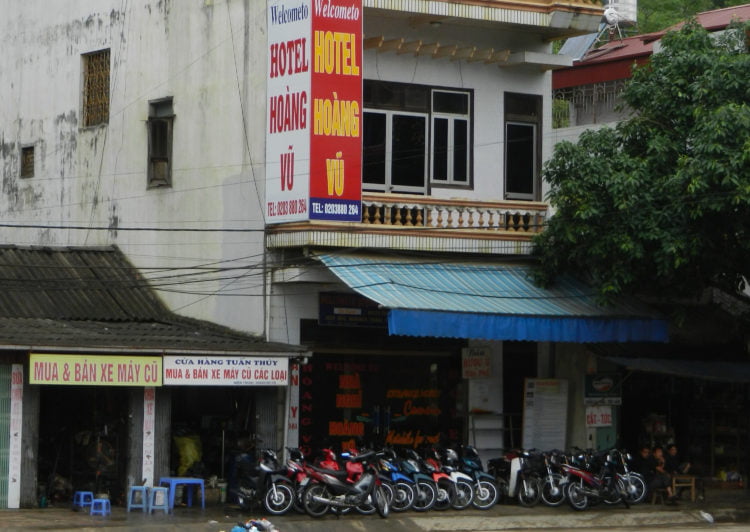 A hotel in Vietnam complete with a bike shop! Perfect.

South-East Asia is well equipped with cheap hotels. The best choices are probably the ones with a restaurant downstairs and rooms upstairs. In recent years, prosperity has caught up with some countries like Malaysia, and really cheap local hotels have become more difficult to find. Beer can be hard to get as well, in the more religious northern areas.

There are still plenty of cheap hotels (with beer – both countries have excellent local brands) in countries like Thailand or Vietnam. The desk clerk, or whoever fills his/her role, will almost certainly allow you to bring your bike inside. If the establishment has an enclosed courtyard, this will be locked at night. There is a good chance that wi-fi will be available. I have camped next to beachside bars in SE Asia after checking with the owner after a few drinks, but security is zero. 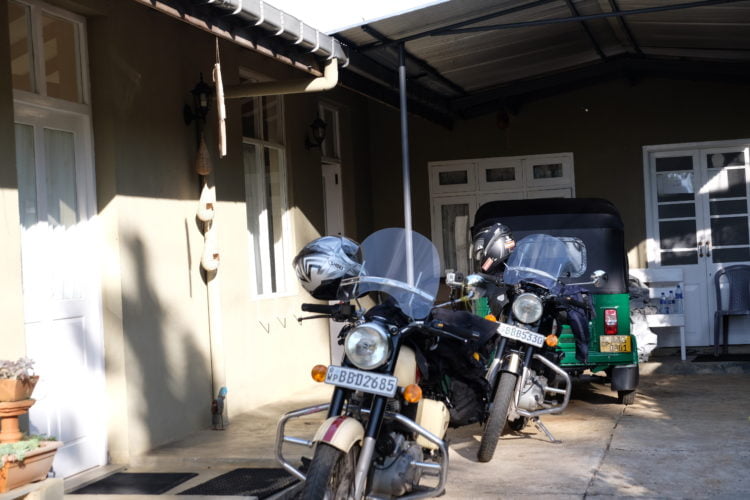 India, Sri Lanka and Pakistan also have inexpensive local hotels, some of which will be in buildings dating back to the British Raj. Appearance can be deceptive here, with a wonderful lobby but no hot water, cold drinks or wi-fi. There will always be tea and almost always somewhere to lock up your bike, and often there is night-time security. In Rawalpindi, the old part of Pakistan’s capital city Islamabad, I have been told that Europeans (“But I’m Australian!”) were not allowed to stay in cheap hotels.

Many hotels have courtyards, and some of these are well-maintained gardens. It does not hurt to ask if you can set up your tent on the lawn there; you may either get permission or a reduced rate on a room! 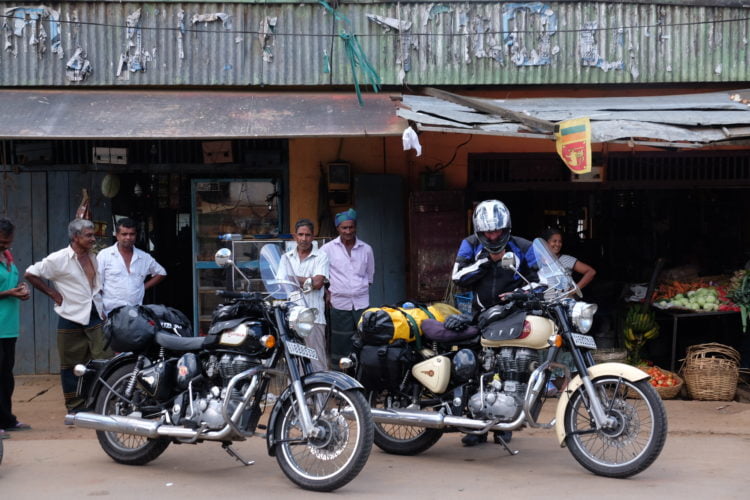 These blokes were only too keen to look after our bikes.

I understand that Afghanistan may be a trifle dangerous these days, although it wasn’t exactly safe the last time I was there. It has much the same kind of hotels as the cheaper Indian and Pakistani ones, though they can be hard to find. I’ve slept in a cell in the Ghazni police station. Good room rate, an okay breakfast and excellent security for the bike.

I haven’t been in Iran for a few decades, but I hope they still have the wonderful campsites that seemed to spring up on the outskirts of towns or in the public parks every night. Plenty of facilities including washrooms and toilets, often someone selling gas cylinders. In my experience Iranians are hospitable to a fault, and free camping is regarded as a human right except in some religious sites. There are also cheap hotels. In Teheran I have stayed at the Gol e Sara campsite a couple of times, but nit seems to have closed.

Both cheap hotels and campsites are available in Turkey as well, and free camping never seemed to be a problem along the Mediterranean coast. One afternoon we pulled into a campsite near Finike on our bike only to be regretfully told that it was out of season. I asked if we couldn’t just camp anyway, and the caretaker said yes, of course. He just could not charge us. Then he went to turn the hot water on. 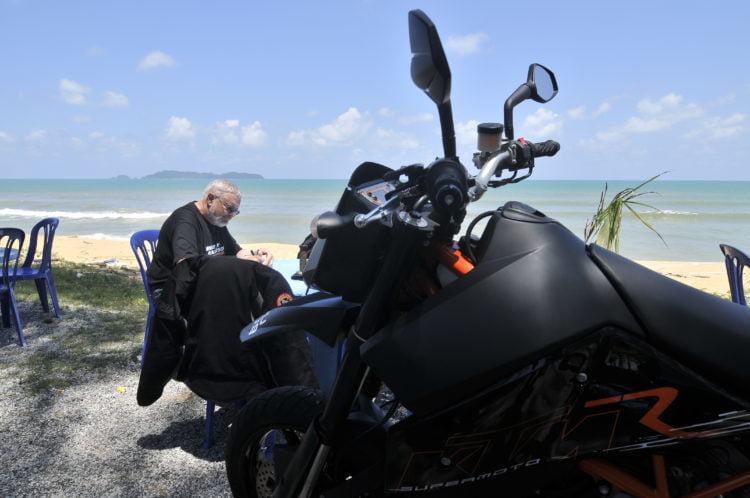 About to set up camp by the beach — free after having a few drinks and dinner.

A few quick words about North Africa. Morocco has campgrounds all over the place, although it might be best to avoid the ones in the very south of the country, many of which cater to ‘substance user’ Westerners. More northerly campgrounds usually have excellent security, even inland where you may find yourself camping in the enclosed courtyard of a hotel.

I won’t try to give any advice about Algeria because the fighting there has changed the country out of recognition. Frankly, I would stay away. Tunisia is better, but there have been some worrying reports about kidnapping, even in tourist areas.

There you go. I hope this helps you a little with your planning. I won’t try to cover Europe because I have run out of room. Hints for Happy Sleep 102 (USA) and 103 (EU) will probably follow if you are interested.