An interesting vehicle caught the attention of English police recently.  Spotted on the highway, it turns out that vehicle was a homebuilt electric motorcycle.

The vehicle was interesting in a number of different ways.  The machine looks like it is a tiny rolling aircraft minus the wings and tail.  Built from balsa wood and “duck tape”, the machine is truly unusual.

My colleague stopped this home made electric motorcycle on the M25 this evening.
Made from bits of balsa wood and duck tape…. #unbelievable pic.twitter.com/aHZ1OhY4Kv

At first, police did not know whether the electric bike was street legal.  But after stopping it and reviewing it more thoroughly, it turns out that it was entirely legal.  After inspection, it was determined that the bike was registered, insured and had all required road equipment.

An officer from the Beds, Cambs, and Herts road policing unit tweeted  photos of the vehicle and said:

“The most unusual vehicle I’ve stopped on a motorway in my 26 years! All checked and in order, although still not convinced I know what it is.”

The most unusual vehicle I've stopped on a motorway in my 26 years! All checked and in order, although still not convinced I know what it is. #400795 pic.twitter.com/oRNgPJEHHa

The BCH police’s tweet brought other tweets from people who had seen the vehicle or just wanted to comment on it.

One person even posted a tweet of the bike in action on the A1. 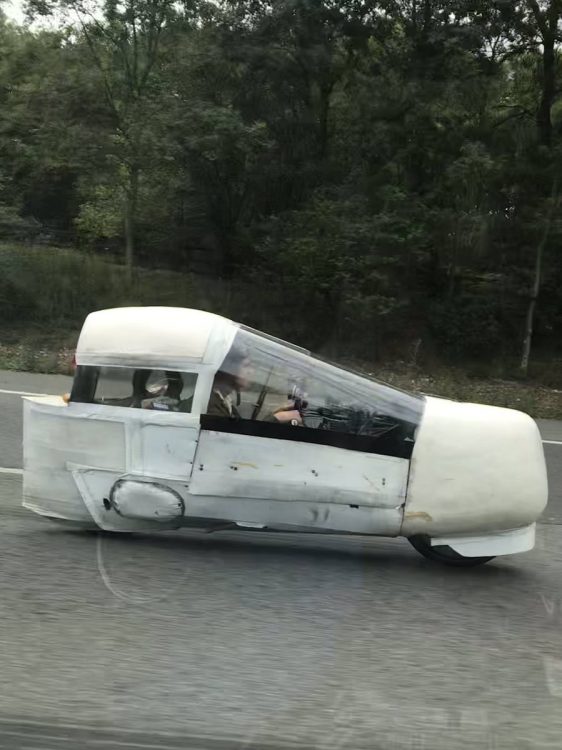 But the motorcycle wasn’t the only source of conversation.  Its construction started a debate on the proper name for the tape that holds the machine together.  Some commenters took issue with the police’s use of the word “duck tape”.  They argued over whether the proper term was “duck tape” or “duct tape”.

The debate even prompted one commenter to tweet his amusement over the debate.

With 436 comments, it’s clear that the little homebuilt electric motorcycle has caused quite a bit of discussion and humor in England.