The ongoing stream of interesting patent discoveries continues, with news of  a Honda design that will automatically adjust suspension settings for varying road surface before the terrain actually changes.

AI-managed suspension has already been around for years, with semi-active systems available on most high-end adventure bikes. These systems react to changes in the terrain the bike rides over. When you hit a bump, the motorcycle automatically adjusts the suspension to compensate for the changing road surface.

That’s a slick arrangement, but obviously limited, as there’s lag inherent in the design. Honda’s patent combines that reactive system with (for lack of a better term) a pro-active system. The design incorporates a monitoring system that predicts upcoming terrain, adjusting the motorcycle’s suspension as necessary ahead of time. 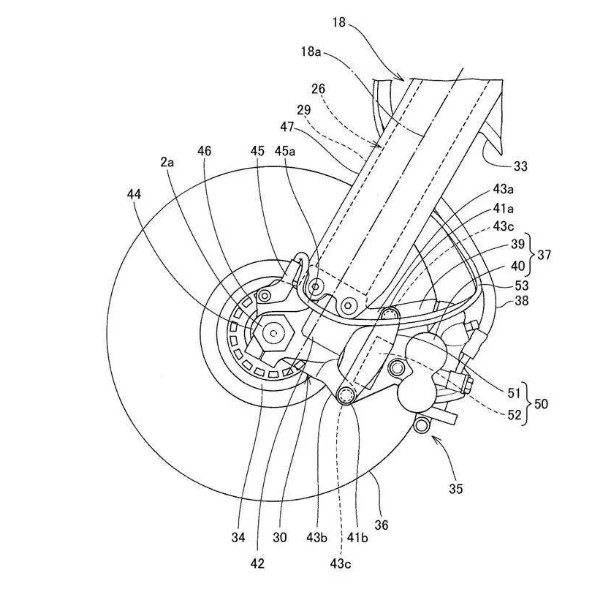 A front wheel sensor gives feedback on the current terrain characteristics, which allows an onboard computer to predict future changes.

The system works by analyzing the motorcycle’s suspension movement over a pre-set distance, reports MoreBikes. A accelerometer measures the amount of change in terrain as the bike travels, and feeds that information to a computer, which then predicts the terrain ahead of the bike. It does not scan ahead of the bike with radar or cameras to predict changes in terrain, although you have to wonder if that technology can be very far away. It’s certainly doable, although it would probably add considerable extra weight.

The proposed system, then, is a compromise, as it’s run by electronic guesswork, but it is still an improvement over a simple reactive system.

This system patented by Honda is mostly just circuitry, sensors and microprocessors, which would add a bit of bulk, but not much. Note that Honda has fitted the system to a CRF450L dual sport in the patent drawings, not an Africa Twin. That indicates Honda sees it being useful off-road, and that it can’t be too heavy, as the CRF450L is bred for lightweight fun.