Honda is generally not well-known for V-twin motorcycles, at least not in the same way that Harley-Davidson or Ducati are. But Honda has made some pretty good ones in the past, such as the RC51 and the Hawk GT. A recently published patent from Honda describes a new V-twin, and the drawings look quite similar to the aforementioned GT. Could this be Honda’s answer to the popular Suzuki SV650?

The Honda Hawk GT, also known as the NT650, was a fairly short lived model (1988 to 1991) that featured advanced features not normally found on naked bikes up to that time. The aluminum, twin-spar frame and singled-sided swingarm were surprisingly similar to that of the RC30, Honda’s spectacular V-four superbike that won the first two seasons of World Superbike under American Fred Merkel. Interestingly, Merkel’s three-peat was thwarted by Ducati’s V-twins. 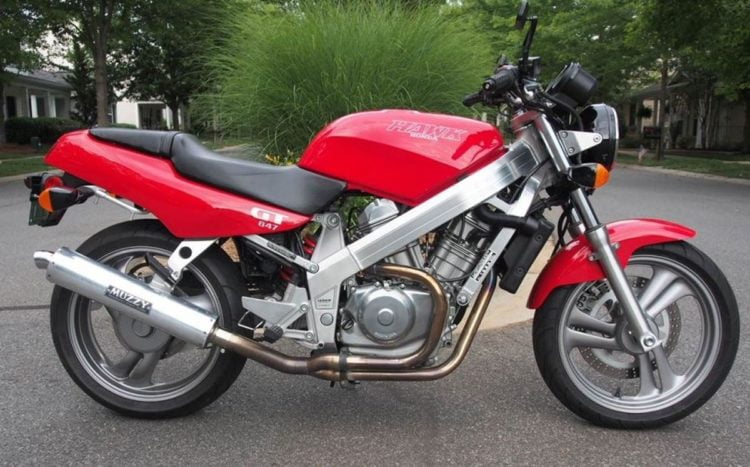 While the Hawk GT was not a huge sales success, it enjoys a cult following of riders who enjoy a light weight ride, relatively torquey V-twin, and the still modern looking chassis. While the patent is light on technical details, the drawings show what appear to be a smaller displacement V-twin in a twin-spar frame not unlike the one on the GT. Could this be a smaller displacement naked to compliment Honda’s possible Africa Twin-powered parallel twin?

At the same time, larger corporations like Honda are known to file numerous patents based on ideas for products that may never be produced, as a way of covering their bases and to stifle competition. Hawk GT fans will have to wait to see if anything like what is shown in Honda’s patent drawings ever sees the light of day.