What was good about the Honda XR400R?

It had the basics, things that everyone’s looking for in an off-road bike. Riders want enough torque to handle hills and power-sapping terrain. They want enough horsepower that they don’t get bored. They want decent suspension travel. They want their bike to be reliable, and they don’t want it to be too heavy.

These days, the OEMs are mostly building dual sport bikes that are highly specialized (the expensive Euro-style street-legal enduros) or highly affordable (Honda CRF250L, etc.). But a few years back, when motorcycle sales were booming and emissions regulations weren’t so restrictive, there was more of an emphasis on do-it-all machines, bikes that worked decently well off-road but weren’t totally awful on the street either. The 650-class thumpers are good examples of this, but there was also a strong 350-400 class, often with a street-legal version of the bike, and a more stripped-down version that was offroad-only.

That’s where the Honda XR400R fit in. It wasn’t street-legal from the factory, at least not in the US, but it was exactly what many dual sport riders were looking for: reasonably lightweight, tough, and all-around competent. 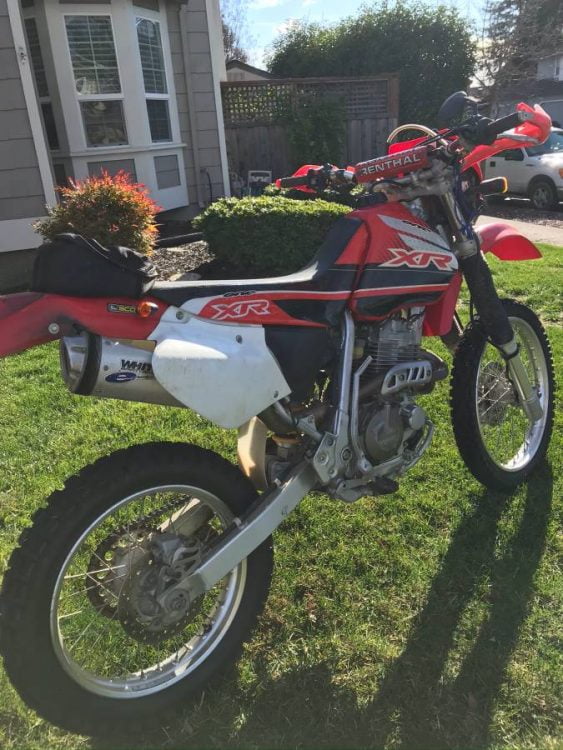 Not an excessive amount of accessories, for sure. That’s an aftermarket can on there. There’s also a set of wraparound handguards. Photo: Craigslist

Hitting the market in 1996, the XR400R was built along similar lines to previous Honda thumpers. Big Red had been building machines like the XR600R, XR650R and XR350R for years, four-stroke bikes that were heavy compared to other enduros, but also with massive torque. You could use them in the tighter trails, but unless your name was Scott Summers, you probably saw them more as a desert bike, or for open trails, than for high-speed woods singletrack.

With that in mind, the XR400R single-cylinder engine had an RFVC head (Radial Four Valve Combustion Chamber), with single overhead cam setup. It was air-cooled, with a single carb (Honda had learnt their lesson and abandoned dual-carb setups in the ’80s). It came with five-speed gearbox and wet clutch, and was rated for about 34 horsepower in stock trim, and 33 Nm of torque.

The 400 had good suspension from Showa (fully adjustable shock; the forks had compression and rebound damping). It had a claimed 257 lb dry weight (117 kg), so it wasn’t super-light, but it also wasn’t as porky as the street-legal competition. The XR400R came with 21-inch front wheel and 18-inch rear, and single disc brakes front and rear. 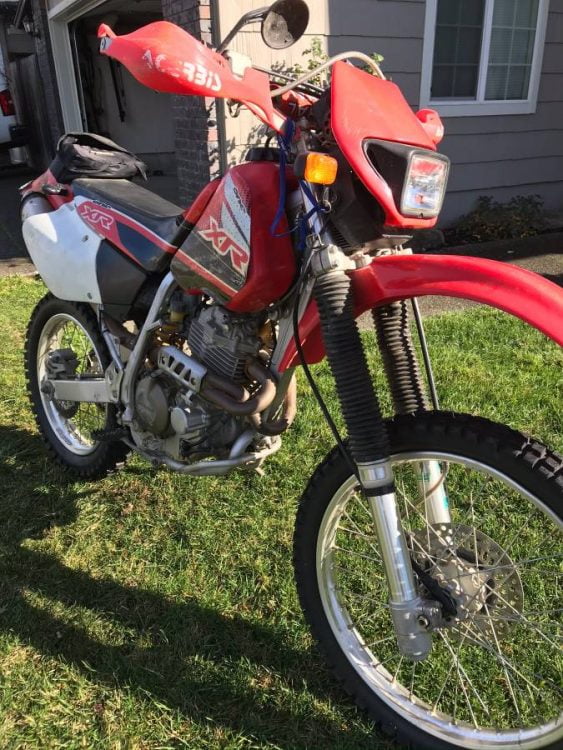 If you wanted to ride the XR400R, you had to get used to the kickstarter. Photo: Craigslist

And, it was kickstart-only. This was common in the early 1990s; Yamaha’s 350 and 600 thumpers were kick-start only, as were Suzuki’s 350 and 650. E-start is becoming more of a standard now for both dual sports and trail bikes, but back then, riders were expected to take the hairy-chested approach and boot their bike over.

That suited some riders just fine, as no e-start meant reduced weight and complexity. Other motorcyclists, who were more interested in relaxed trail-riding and less interested in racing, found the lack of an e-start irritating. Some went so far as  to jury-rig electric starters to their XR400R, using parts from the Honda EX400 ATV. The general consensus among wiser heads was that if you wanted a bike with e-start, just buy a different machine to begin with.

For those riders who didn’t mind the kickstart, there was a lot to like about the XR. It might not have been a direct replacement for two-stroke trailbikes, but it was tough, torquey and tunable. Honda actually offered an OEM upgrade kit that boosted horsepower, thanks to a high-compression piston, a trick cam, carburetor tuning parts and other goodies.

However, the ultimate upgrade for many riders was a street-legal light kit. The XR was lighter and more powerful than the 350-class bikes from Yamaha and Suzuki, so why didn’t Honda make it street-legal as well? Hard to say, but owners took matters into their own hands, since Big Red wouldn’t play ball. Street legalization wasn’t always possible, depending on the motor vehicle department rules in your jurisdiction, but this seller, based in Santa Rosa, managed to pull it off. 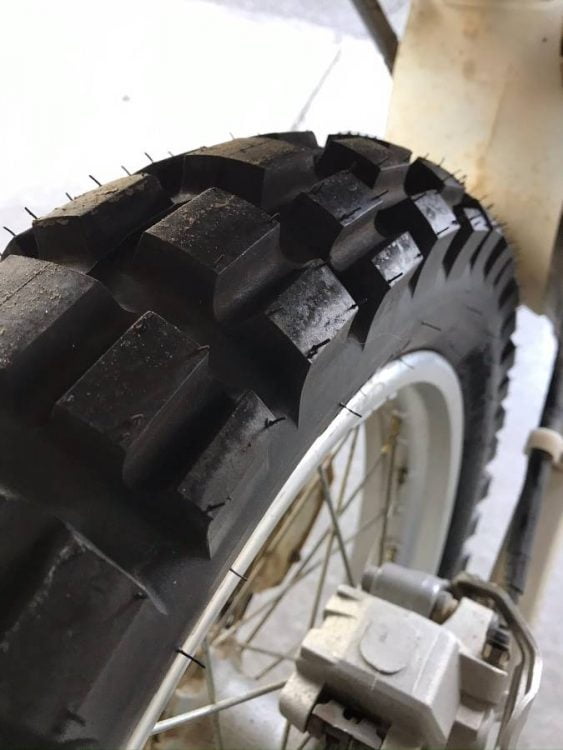 According to the ad, this 2002 model is “plated and street legal.” The seller also says he cleaned the carburetor, as the bike had been sitting a while, and installed new Continental dual sport tires. The light kit is from Baja Designs, with the stator re-wound to handle the extra electrical load. The bike also has a White Bros. exhaust, and new spare clutch and throttle cables. The seller is also including riding gear (helmet, boots, etc.) with the bike. Asking price is $2,300, and the terms are cash-only.

Do you want a Honda CRF450L, but don’t have the dough? This could be an alternative for you, a dirt bike that’s been set up for street use. If that interests you, then give this guy a call (the number’s in the Craigslist ad), and live out your Mondo Sahara dreams on your new-to-you Big Red Pig. Or is it a Little Red Pig? Maybe a Medium Red Pig?