Horses Under Glace Bay is the second of ADVRider’s Oddities Uncovered Series, a Series of Strange Places Found while Riding.

Kim and I have been traveling to Nova Scotia, Canada on our bikes for years.  That part of the world has an extra special something that’s hard to put your finger on.

Nova Scotia’s charms had attracted us for many years but it wasn’t until we spoke with a local that we found out about the Glace Bay Coal Mines.  Located in the northeast corner of Nova Scotia, coal was first extracted in large quantities in 1861.

The mine shafts extended under Glace Bay for miles.  Men worked in shafts that were not tall enough to stand in for around $1.50 per 10 hour day.  Boys also mined coal and were paid about 65 cents a day.

We were led through a tour of some of the mines by Tom who spend decades under earth and sea mining coal from the Glace Bay mines.  Photo credit: Mike Botan

But one other worker toiled in the darkness under the sea.  Horses were drafted into service and worked under the ocean hauling the mined coal to where it could be collected.

Once in the mines, the horses didn’t leave except for the two week period when all miners were given vacation.  Then the horses were also given their time off above ground.  But as soon as the vacation was over, the horses returned to the depths of Glace Bay. 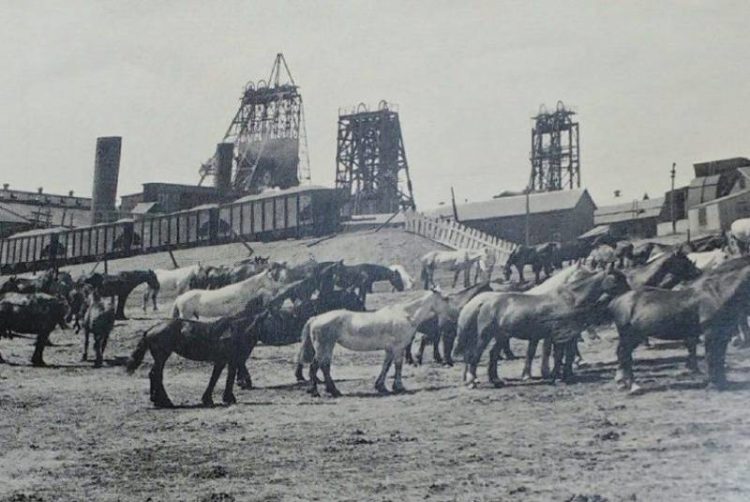 Pit ponies above ground and on vacation from the Number 20 Colliery in 1952.  Photo credit:  Cape Breton Post

Called pit ponies, the horses were well kept and possibly led a more protected life than the miners.  Each horse was given a heavy leather cap and mask that fit between its ears and over its nose.

Housed underground (sea) each horse had its own stall.  They were well fed and ate grain and hay.  Most men loved their horses and took very good care of them.  Horses ultimately produced more coal than an individual miner.  So miners that didn’t take proper care of the animals were taken to task.

Working in the mine was not a safe job either for the miners or the horses.  Horses received four main types of injuries:

At a certain point in time, it could be determined that a horse should be retired.  Once retired, they were returned above ground to live out the rest of their lives. 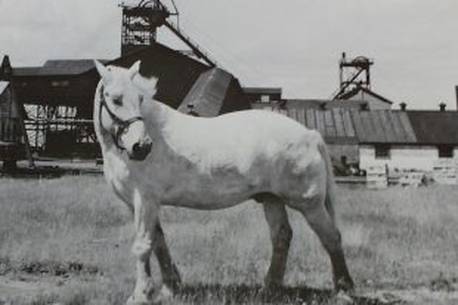 Pit pony Fraser above ground on the occasion of his retirement from Pit 1B. Photo credit: Cape Breton Post

So unless you had visited the Glace Bay Miners Museum, you wouldn’t know the story of the people and horses that toiled for long hours under the sea.