Back in 2018, we told you about the Hoverbike S3, a four propeller flying “motorcycle”.  Since then, the machine has been renamed the Hoversurf Scorpion flying motorcycle.

Some thought the “bike” may be a publicity stunt while others pointed out how dangerous the unshrouded propellers would be.  But that didn’t stop the Dubai police from signing a deal with Hoversurf to continue testing and demonstrating the flying machines.

And now, video footage has surfaced showing the Hoversurf Scorpion crashing during a test.  And, it’s frightening.  We’ll say upfront that the pilot of the “bike” appears uninjured after the crash, but it is still a scary scene.

In the video posted on YouTube, the pilot almost immediately begins to ascend.  He reaches a reported altitude of 100 meters.  It’s at this point that New Atlas reports that the machine’s barometer failed.  The “bike” briefly falls but the pilot seems momentarily able to control the bike.  It bucks downward and once again the pilot corrects and raises his right hand seemingly cheering his save. 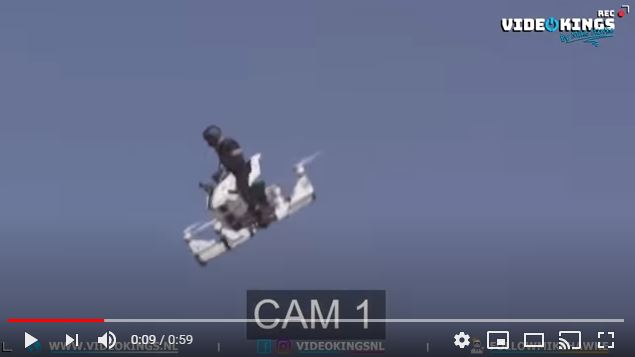 A screenshot of the Hoversurf Scorpion pilot shortly before its crash. Image credit: YouTube

But then the bike bucks again and it becomes clear that the pilot cannot properly control the machine.  It then makes a very hard landing, rolls backward, and flips over with its propellers still under power.

The pilot is able to quickly right himself but appears momentarily dazed, but not seriously injured.  As a result of the crash, New Atlas says that the Hoversurf Scorpion is a total loss.

There’s no news of whether Hoversurf will continue its testing with the Dubai police, but it’s clear more work is needed.