A Colombian rider contacted me and asked where I found the tracks as he had no idea there was a way through some of the areas we had shown and that tracks even existed there.

Paper maps are great. In the western world if you get a good scale map they will show everything, even down to footpaths. The Delorme Recreational Atlas & Gazetteer for individual states come to mind, usually 100+ pages and amazing detail and a perfect size to fit in your panniers/saddlebags and updated on a regular basis.

In Europe you can also find similar, but what about the developing world? How do you find dirt tracks to try and ride from Cartagena to Ushuaia. How do I do it?

Google to the rescue, sometimes.

Google has been mapping the planet for years and sending drivers out in cars with cameras on top to let us see imagery. Most people will probably know this. There is a little yellow guy in the bottom right corner. If you drag him over a map it will light up with blue lines 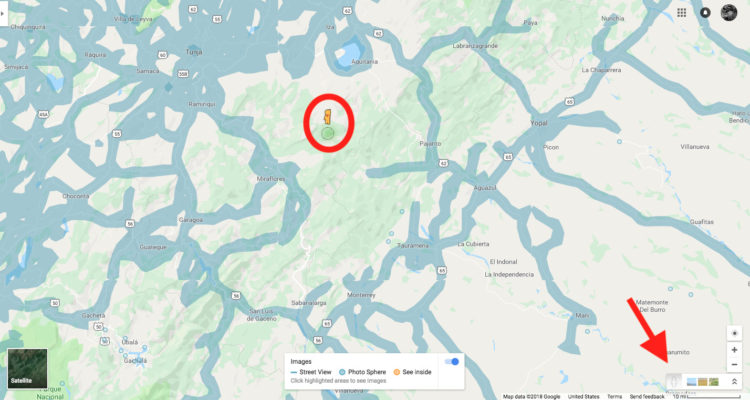 What I look for is where those blue lines end, there is a very good chance that that road will or does turn to dirt where the blue stops…I try to plot a route thru a country not using anything that highlights blue.

You can confirm this also if you do a satellite view and zoom in.

What are your favorite ways that you have had great success to find international remote tracks?