As a young kid I wanted the Dakar Rally on television every January and kept asking my parents for a bike, sound familiar? Well, at the age of 10 years I traded my noisy drum kit for an even noisier TY175 Yamaha and began trials riding. It was not really what I had in mind but my father, Robin, told me I needed to prove that I had balance and control before progressing to a Motocross bike. The competition was amazing. I loved competing with myself, trying to clear sections in training and attempting to do better than the other riders; so much so that I didn’t even end up bothering to progress to a different discipline. I rode trials for about 6 years and only quit to focus on exams. After the exams, the need for speed became more clear and I eventually transitioned to enduro.

At the age of 21, the earliest possible age to get an ‘open’ license for the road, I sat and passed my test during a 3 day training course. I then bought a Honda Fireblade, the fastest production bike at the time. My parents were not impressed but I managed to convince them that it was OK by miraculously staying safe (I was lucky!). It was only when I transitioned to road racing that it got expensive and so I switched to Supermoto where you could ditch the bike, pick it up and go again. All this mixed in with line starts, elbow bashing and ‘backing it in’ was awesome.

Races to Places: travels around the world. The photo above is from traveling solo in Namibia, Africa. Taking selfies like this can take a lot of setup tike but it’s worth it.

After completing my degree in engineering I joined BAE Systems and quickly rose through the ranks to become an executive aged just 30. From my early years as a design engineer right through to running the company’s aerodynamics test facilities in the UK, my love for engineering led me to positions all over the world. In 2005 I found myself working at Lockheed Martin in Texas where, for the first time, I decided to try Adventure Riding. I bought an Adventure Bike (KTM 950) and joined ADVRider.

The story of adventure is a long one, but it started with a complete overhaul of my bike. Some of you might remember ‘My KTM 950 Story’ from 2006. I participated in some local rides, then some longer rides all over the USA before my first cross desert race, the Baja 1000 with ’Team Double Barrel Racing – 2 Cylinders = Twice the Stupidity’. I was hooked and the racing fire was relit inside.
After competing in seven different disciplines of motorcycle racing, I had found the one that ticked all the boxes. I progressed enough to race some rallies in the UK and some Cross-Country Rallies in Europe. In 2012 after my good friend Ned Suesse (@Neduro) raced the Dakar and I figured I wanted a bit of that too and Ned convinced me I could. I made a plan and managed to finish 46th overall with a 9th place stage result on my debut. The photo at the top of this article is of a young Lyndon in Africa on his KTM 950. 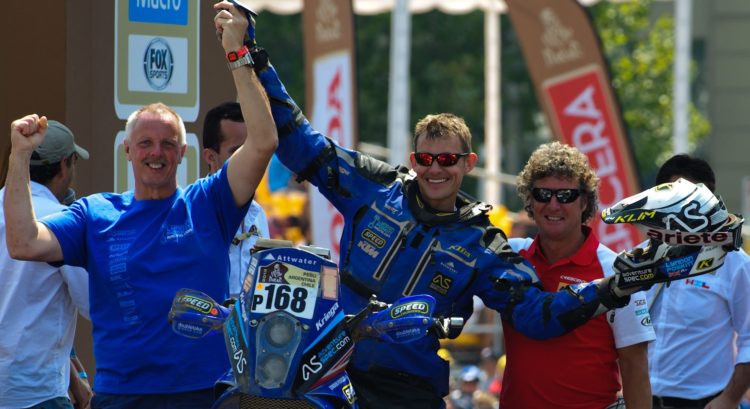 Dakar 2013 finish podium with his Dad and Friend Ivan. Many people supported this effort from ADVRider.

I was content with the achievement of Dakar and got my head down, enjoyed my racing and traveling, and a lot of working, until in 2013 when a near-fatal training incident changed my perspective on life. As I lay in the hospital for a number of days I started dreaming of achieving the seemingly unachievable, to ride around the globe and also race on each of the six populated continents, something that I was unaware had ever been achieved. I used the KTM Factory Rally bike as a basis for my bike and pretty much went to town re-designing many aspects of it. I called it Basil (after my late grandfather) and called the entire project ‘Races to Places’.

I’m a goal-driven person so I needed a commitment throughout the project so I gave myself the challenge of filming and editing a video series capturing my adventures along the way. Little did I know at the time just how much work that was going to be. It took 5 years on the road and during that time I filmed over 180 video episodes, rode 230,000km through 74 countries and participated in 11 competitions, including 2 Dakar Rallies in the Malle Moto (unsupported class) finishing 39th overall and 32nd overall in 2017 and 2018 respectively.

It’s been a hectic time, a full time job and often stressful at times, but, when I look back, it has been quite literally been the best job in the world.

Look out for my upcoming posts. I will be writing about gear, places to ride, the trials and tribulations of riding solo, planning and preparation and more.