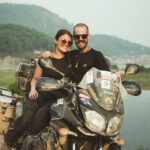 Getting to know various communities with unique cultures and ways of living is one of the best experiences of being on the road.  But along with the good ones, at one point or another, we face bad experiences and threatening scenarios. Social media is a good medium to make this public, and this is why many travelers choose to run blogs and pages of their adventures.  But when and where should we speak out?

When should we simply move on and keep what happened to ourselves?

I always say that major media corporations have agendas, just like any institution and political party.  One of the reasons we had decided to share our experience online was to show our followers our own experience, wherever we are and people appreciate this.  Recently, however, we found ourselves in a situation which made me think about this further. 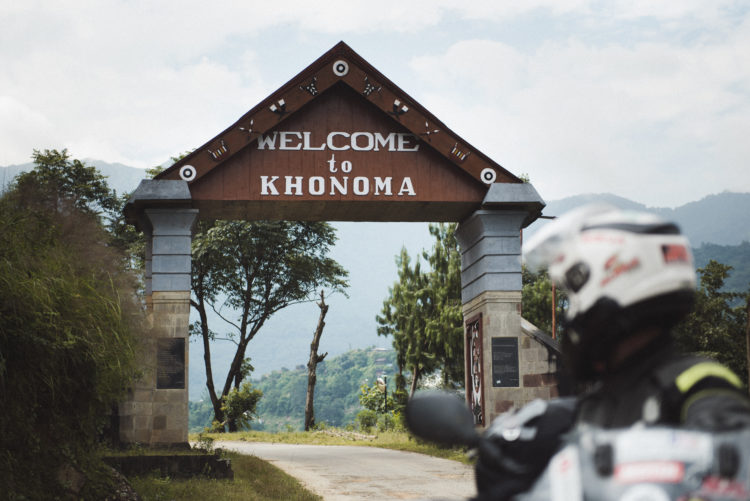 An incident in the north-east

We decided to go to a village called Khonoma in the state of Nagaland, North East of India.

When we arrived at the village, we saw a group of people coming down from church and waited for them to pass.  A guy in his early thirties immediately approached us and with a forbidding expression and irritated asked “Where are you going? Turn around! There is only the church up there” Another guy approached us and with a friendly tone, told us that the road is closed. He told us to park the bike, walk up to the village and ask for a room at the hotel. 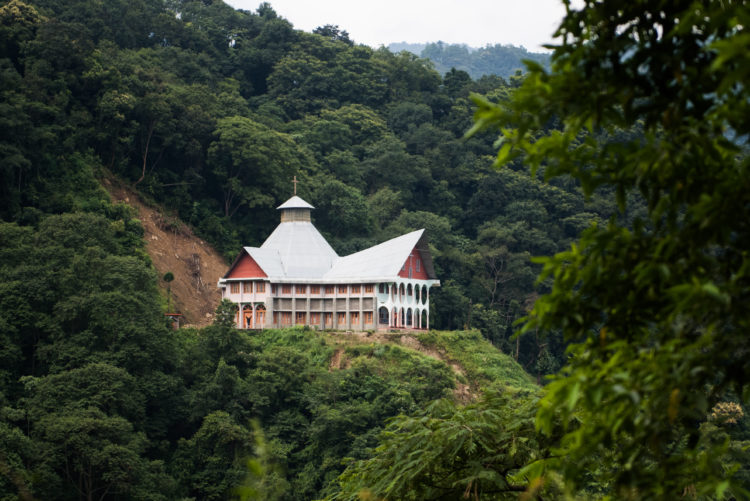 We don’t usually leave the bike, fully loaded, on the side of the road so we decided to carry on riding. Within some six miles, we saw a lovely spot perfect for camping. We had been wild camping India for eight months and it was always acceptable so we didn’t think twice about it and pitched our tent there.  At that point, we thought that we were in a village called Dzuleke.

It was peaceful, the landscape was breath-taking and the few people we came across were friendly.  We enjoyed it so much that we decided to stay the following day as well. 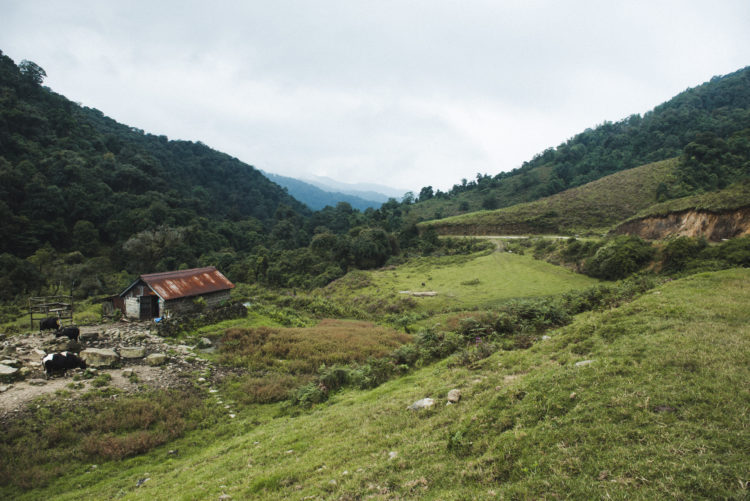 On the second day, at around four pm, a group of local villagers approached Daryl.  I was in the tent but I could hear everything perfectly clear.  I later realized there were five of them. They asked him whether we have asked for permission to pitch the tent. If not we should immediately pack and leave. Daryl politely told them that we had spoken to other locals around the area and they were all happy with us camping in this spot.

Apparently, we were still in Khonoma. To get the permit, we had to ride back around eight miles of off-road, leave the bike parked outside the village and ride back to pitch the tent again as it was too late to move somewhere else (It gets dark around 5.15pm).  For this reason, we were hoping to convince these people to let us stay, but they were adamant we should leave. The debate got a little heated, and Daryl pleaded that we weren’t causing any trouble or bothering anyone 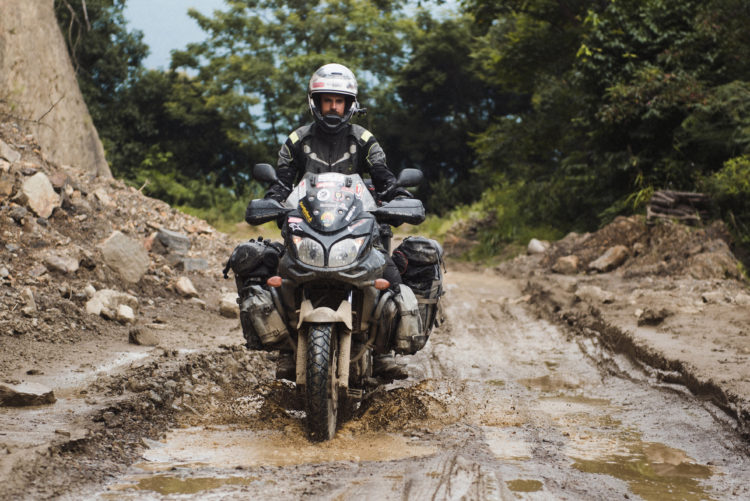 Suddenly one of the guys slammed his hands down on the seat of our bike. He started shouting “This is our village! Get OUT!” In seconds it escalated.  I ran out of the tent and saw two guys all worked up pointing their fists towards Daryl.  A rush of panic took over me and I started shouting “Don’t touch him!” Instantly, the angry man who was yelling at Daryl turned to me and shoved me aggressively. I was shocked. This was the same man who spoke to us outside the church and made it clear we were not welcome there.

He had also mentioned that he was the President of a youth organization. I burst out crying and told them that in one year of travels, this had never happened to us. I asked them to let us pack in peace, and we’d leave immediately.

We rode a few kilometers to the next village, tried to get the permit to repeat the same mistake, but there was no one.  At night, locals approached us and called us from outside the tent but their intentions were only kind.  The people of Dzuleke confirmed that we did not need anything, were not lost and left us to rest in peace.

Attempting to raise awareness on what had happened and to prevent this from happening again, we decided to share this on a prominent Indian overlanders’ group, instead of our own blog, internationally. 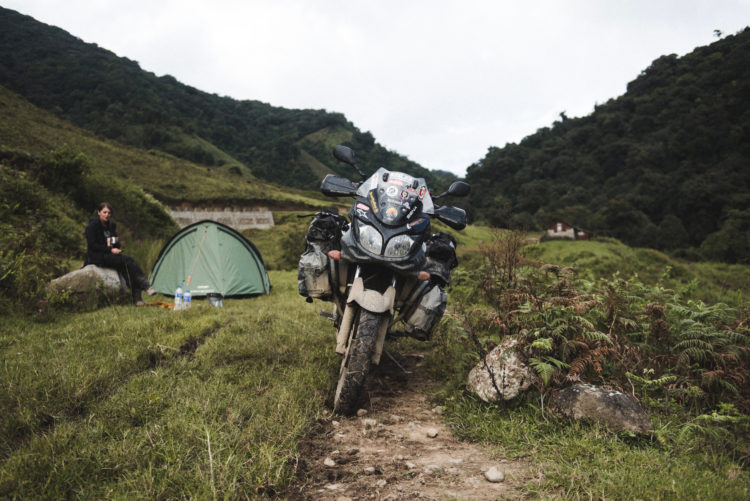 To cut a long story short, the post went viral. I received an endless deluge of messages: most of them were heart-warming apologies and well wishes. Others, however, included all sorts of disgusting language and even death threats.

One guy contacted me saying that the whole village discussed what had happened. He also said that he knows who the people who approached us are.  As soon as I had that confirmation, I told him that I can put this to an end as the necessary measures can be taken.  I posted the conversation online for everyone to have clarity and closure and the admin closed the threads.

A few days later someone posted an official letter from the Youth Organization board of the village. I was in awe. This letter twisted all the facts and humiliated me by accusing me of doing certain actions on the site. 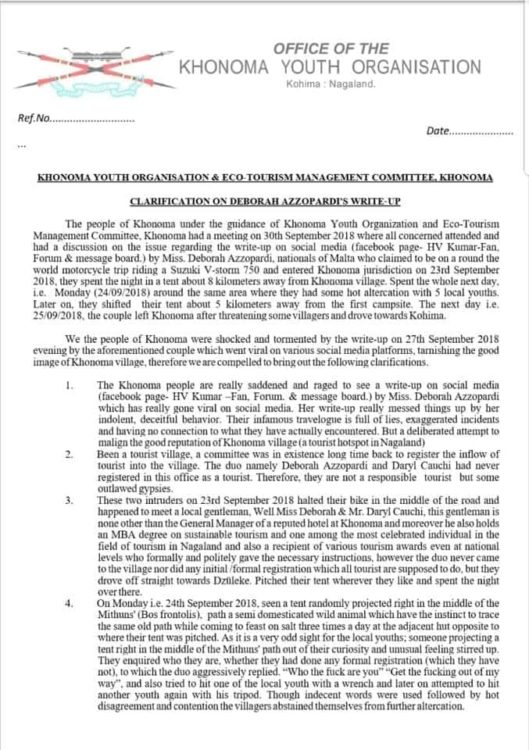 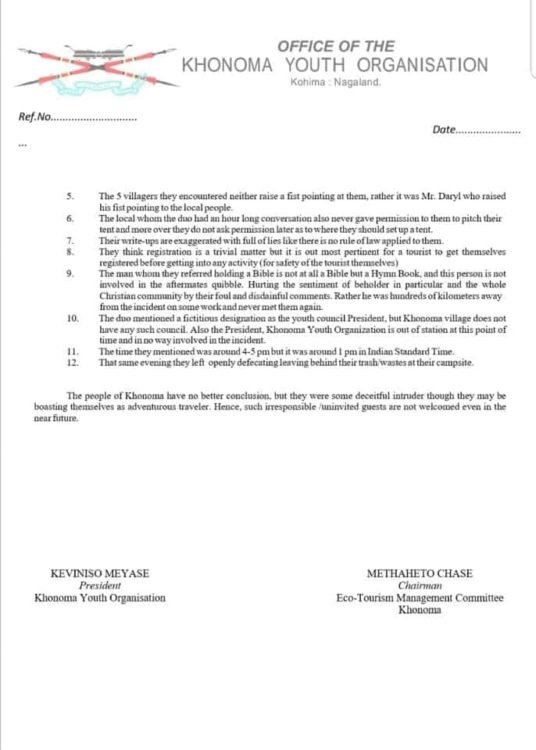 At one point, I got so fed up of the dragging situation that I regretted posting this online.

At the same time, why should I keep silent if I was mistreated? Clearly, not getting the permit was a mistake – but did we deserve the treatment we got?

We usually follow our instinct and post what actually makes a difference to locals and tourists alike.  In my post, I had immediately stated that this experience did not shape our perception of the whole state of Nagaland and its people.  My intentions were genuine – I wanted the people to be aware to avoid this from happening to anyone else.

What is your opinion on this?