This guest post was kindly contributed by Chris Cope, from The Motorcycle Obsession (TMO), who originally published the article here.

Hi Chris,
I enjoyed the story of your riding a BMW K 1600 B on the Blue Ridge Parkway and Skyline Drive. I will be doing this ride on a 2019 Harley-Davidson Street Glide Special in June with my son and his riding group, from New Jersey down to Washington, DC, then west to Shenandoah National Park. To get to New Jersey I’ll be riding solo from Ontario. Reading about your ride I couldn’t help but wonder: how do you safely secure the bike overnight at your stops? Also, how do you secure your helmet and gear while at lunch and break stops?
– Pete

That sounds like an awesome trip, Pete, and a Harley touring rig is a solid way to cover those big miles. I think it’s great that you’re taking on such an adventure. I’ve run into a fair few motorcyclists who wouldn’t attempt it, which makes me feel a little sad for them and the experiences they’re missing out on. 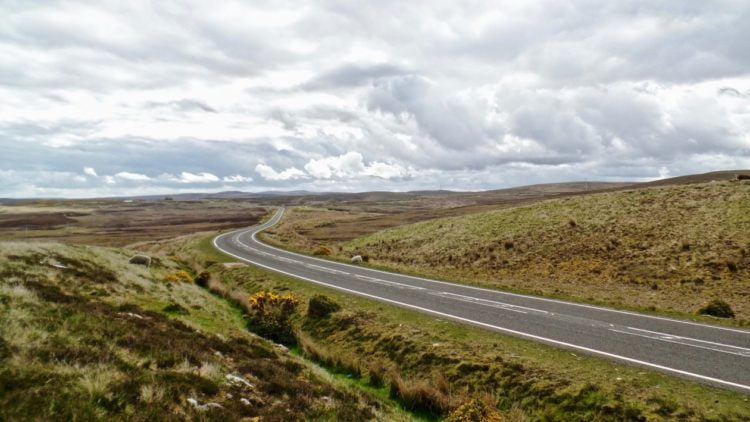 Traveling by bike allows you to connect with the landscape

So, the first thing to remember is that the world is not nearly as terrible as some would lead us to believe. We live in a time of corrosive politics and ideologies in which we are constantly being encouraged to fear one another. We are fed the idea that the solution to whatever discontent we may have consisted of more walls, more weapons, more separation, more distrust. What you will find as you ride from Ontario to Virginia, however, is that a hostile line of thinking is actually bullshit.

Most people are essentially good. They may not all be the sort you’d want showing up at your daughter’s birthday party, but most have no interest in causing you harm; most have no interest in stealing your bike. Instead, you will find them to be friendly, good humored, interesting, and often surprisingly respectful of your pride and joy. This is the joy of travel.

That all said, not everyone is living up to their full potential. Theft happens. Many years ago, when I worked in television, I produced an extensive piece on car theft in which we spoke to police and thieves, and I think the two main lessons of that piece transfer to motorcycle theft. The first is that nothing is foolproof. There is nothing you can do to prevent a particularly motivated individual from taking your stuff. This is why you should make sure you have good insurance coverage. The sting of waking up to find your bike missing is considerably lessened by the knowledge it can be replaced. 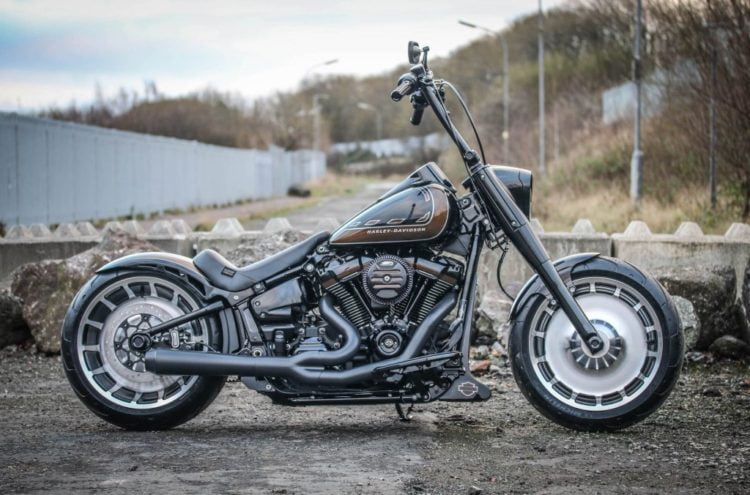 Unless your bike is a custom beauty like this one it can be replaced.

Thankfully, the second lesson is that the overwhelming majority of thieves are not terribly motivated. Some 99 percent of thieves got into the business of thieving because it’s easy; most thefts are crimes of convenience. So, the key to safeguarding your stuff is to make it inconvenient to steal. That can be a little tricky when you’re on the road and having to constantly adjust to new environments but there are a few things that appear to have worked for me over the years.

You’re starting on relatively good footing with the Street Glide Special. That’s a heavy motherhugger of a bike, so no one will be picking it up and tossing it into the back of a van. You have a keyless start, which means that getting the thing running without a fob is incredibly inconvenient, thereby making it a lot less desirable. But certainly don’t underestimate the value of setting the steering lock. Harley put it on the bike; use it. Beyond that, here are some more universally applicable tips:

You might think a clever way to keep your bike safe is to park out of sight – in a dark corner of a parking garage or in an alley, perhaps – on the theory that if thieves don’t see it they won’t steal it. Maybe, but that also means no one will see it being stolen. Quiet, hidden spots potentially give criminals more time and opportunity to work. Remembering that most people are good, it makes sense to leave your bike somewhere they will see it. Choose well-lit, heavily-trafficked areas. If you’re at a hotel, ask the desk (Remember to be polite!) if they’ll let you roll your bike right up to the entrance, parking it where the smokers hang out. I’ve rarely been denied this request and it’s meant my bikes have enjoyed CCTV and a security detail of nicotine addicts.

If you can’t park right at the entrance, park as close as possible – ideally right under a street lamp. Meanwhile, you can’t really control who parks next to you, but try to avoid placing yourself next to dual pickups and other tall vehicles, which might provide visual cover for ne’er do wells.

Keep Your Bike Under Cover

Seemingly running contrary to the idea of high visibility is the idea of keeping your bike under a cover, but this makes sense. You want people to see your bike, but not your exact bike. It may be a Street Glide Special under that shapeless cover, or it may be a decrepit old Honda ST1100; the thief won’t know until he or she walks up and takes a peak, which is inconvenient and suspicious behavior. 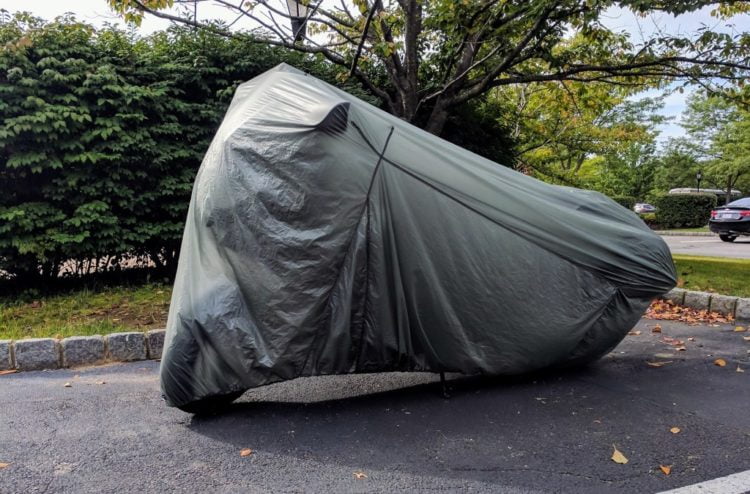 The Aerostich Ultralight bike cover, hiding a BMW K 1600 B. The cover folds into a pouch that is not much larger than my hand.

My cover of choice when traveling is the Aerostich Ultralight. It’s somewhat weatherproof (though not impervious to heavy rain), weighs less than a glove, and packs down into a tiny, almost hand sized self-contained pouch. The thing I particularly like is that it packs down easily – no Marie Kondo-style folding necessary, just stuff the thing into its pouch.

Locks serve as both visual and physical deterrents. To benefit from the former I usually carry a big, chunky, Oxford Monster XL chain and lock – a massive thing that looks like a complete pain in the ass to try to cut through or break. I also feel it sends an additional visual signal that the owner of the said chain may carry other big, heavy things – hurty things.

When traveling, it’s rare that I’ll find something I can actually chain the bike to, so I usually try to run the chain through the wheel in such a way that it wraps around the fork, thereby making it impossible to roll the bike away. If you’re riding with someone, chain your bikes together. 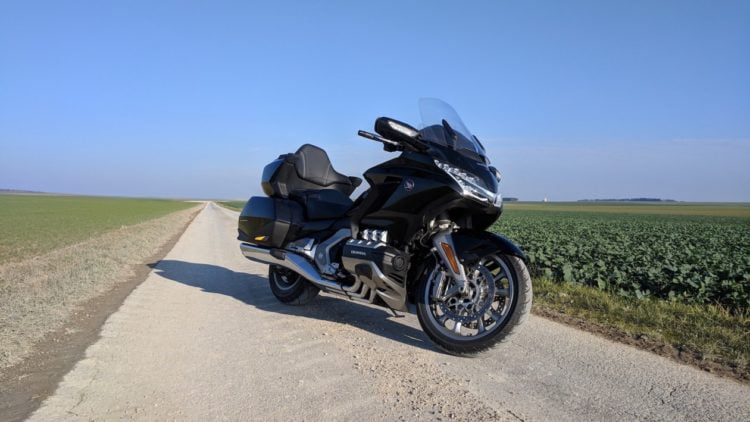 Even when I recently rode the massive Honda Gold Wing to Milan I made sure to carry a chain and lock.

The drawback to a big lock and chain is that it is heavy AF. The aforementioned Oxford jobbie weighs a whopping 7 kilograms (about 15.5 pounds) and takes up quite a bit of space. My buddy Cam uses a big D lock instead, which he transports by slipping it under the Kriega US-30 bag he straps to his passenger seat. I have some friends who swear by disc locks, but I feel they lack the visual deterrent ability of bigger items. Obviously, though, the lock you actually carry is better than the one you don’t. My friend Ben Lindley, formerly of Bike Magazine, had a big chain that he abandoned halfway through a trip to Italy last summer because he felt it was too heavy.

I probably don’t need to tell you this, but most motorcycle panniers are pretty easy to break into. If you have hard cases, they create an additional level of criminal inconvenience that’s good for helping protect a laptop or the like when you’re stopped for lunch, but they should not be seen as mobile safes. I’m pretty sure the average 12-year-old boy or girl, armed with a simple claw hammer, could get into a Harley pannier within 45 seconds.

Related to this, I generally feel it’s a poor strategy to leave stuff on your bike at lunch stops. I’ve seen bikes left with helmets perched on a mirror, jackets thrown over the seat, GPS units still attached, and so on. I believe in the inherent goodness of people but that strikes me as an unnecessary test of faith. It’s a pain, but my advice is to bring your gear in with you. At the very least it’s worth doing in summer because it means the gear won’t be left in the sun baking. 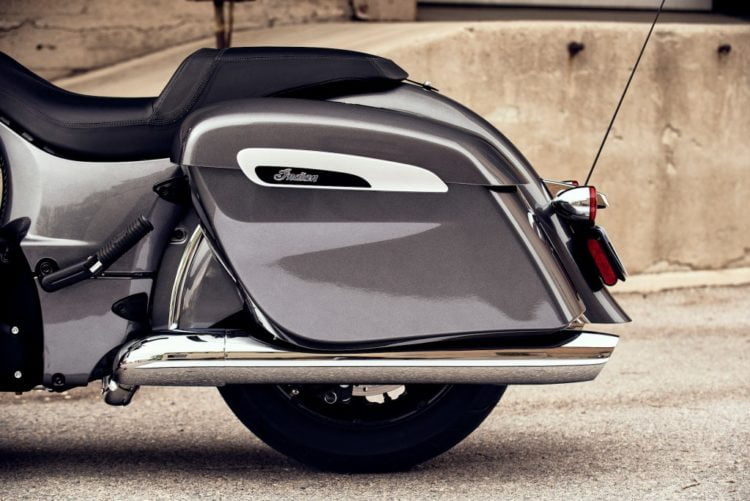 Be careful not to put too much faith in your panniers

I’ll admit that for bathroom breaks and lunch stops I’m more relaxed about soft luggage or what have you. If you stick to the advice about parking in high-visibility areas, I feel the inconvenience of having to undo luggage straps/bungee cords is enough to deter a have-a-go malefactor who probably knows deep down that there’s nothing in that luggage but dirty underwear.

One of the most important aspects of traveling by bike is keeping your bike’s safety in perspective. You’re out on the road to see and experience, to live, and inherently that’s an act that puts you and your belongings at greater risk than if you were both sitting at home. It’s best to reconcile yourself with this risk; try to avoid it, but acknowledge it exists. Don’t be that guy who wakes up at 3 am and trundles out to see if his bike is still in the parking lot. Even if it isn’t there you won’t be able to do anything until normal working hours, so you might as well get a good night’s sleep.

Related to this, and particularly relevant to those with attractive motorcycles, you should come to terms with the fact that some people are going to touch your bike. These are not people with criminal intent but who are curious to the point of failing to adhere to social norms. You will occasionally return to your bike to find smudgy child fingerprints on the tank, an unthinking parent having seized upon a perfect photo opportunity. Mirrors will have been moved. Switches will have been pressed.

If you can’t handle this you should not be riding. Let go of your Jax Teller fantasies and accept that it happens. In fact, consider it your contribution to the greater motorcycling world; you’re helping to spark interest. Maybe that kid will grow to prize the photo of herself on your bike, and one day she’ll get a bike of her own. Then she’ll find out, as you already have, that traveling by motorcycle is awesome.

Chris Cope is a Texan currently based in the United Kingdom, where he lives with his far more interesting (and attractive) wife, Jenn, and a flatulent rescued greyhound named Jerry. He enjoys traveling long distances for no particularly good reason, often on bikes that seem ill-suited to the task. One of his favorite recent adventures involved riding a Harley-Davidson Street Bob from Cardiff, Wales, to Prague and back. He can talk for a really long time about professional wrestling and the British dance show “Strictly Come Dancing.” In other words, he doesn’t have a lot of friends, so motorcycling provides a way to pass the time.