How did you start riding motorcycles? Chances are, you were taught by your parents, friends, your partner, or at the very least, an MSF coach. Most people I talk to tell me they started riding because their friends were into it, and most female riders tell me it was because their brothers, boyfriends, or husbands rode.

For me, it was because I got jealous.

Back in 2013, I was backpacking and volunteering in Peru when I noticed I kept meeting more and more motorcycle riders. I traveled by bus, and I’d see riders through the bus window, passing our slow-moving monster of diesel fumes and disappearing around the next corner; I’d meet them in hostels, always a little aloof but at the same time, chatty and willing to share beers. Little by little, I got curious, then outright jealously: although we were traveling the same country, motorcycle riders had completely different experiences than me, a lowly backpacking civilian.

I wanted to know why. 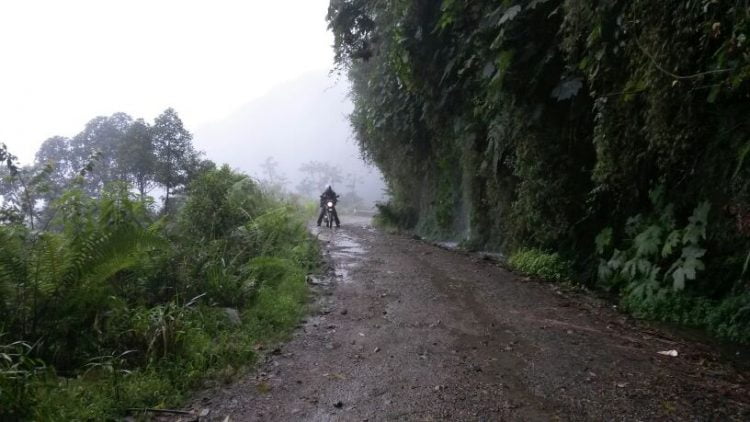 Crawling along the Death Road, Bolivia

How to Buy a Bike in a Washing Machine Shop

In Peru, motorcycles aren’t a big deal. Back then, I knew nothing about Ewan and Charley, large capacity BMW motorcycles, or even what cubic centimeters really meant which why I chose my first bike by color, not engine size. In Peru and South America in general, pretty much everybody rides. Small Asian bikes, not GS’s, sure, but not knowing the difference, I just thought riding was riding. And, if just about everybody – men, women, teenagers, entire families – rode, I figured it must be fairly easy to learn. After all, if a fourteen year old Peruvian girl can ride a small motorcycle while balancing her baby brother, a bundle of market goods, and a shovel on the back of the bike, surely I could ride, too?

As luck would have it, when I made the decision to get a bike and learn to ride, I was staying in a little desert town of Nazca. One of the other hostel guests, Ryan from California, was traveling Peru on a dirt bike, and he kindly agreed to teach me to ride. First, I needed a bike, however.

Locating a home appliances shop on the main street of Nazca, Ryan and I spotted several little motorbikes parked proudly in front of the washing machines and microwaves. The minute I laid eyes on Blinkin, a blue 150-cc Zongshen, I knew that was the bike for me. Ryan tried to convince me to get at least a 250cc bike but, not knowing much about CC’s, I picked the blue one, and that was that. The bike cost a whopping thousand dollars brand new, a Taiwanese helmet with a dejected Asian Spiderman on it generously included. 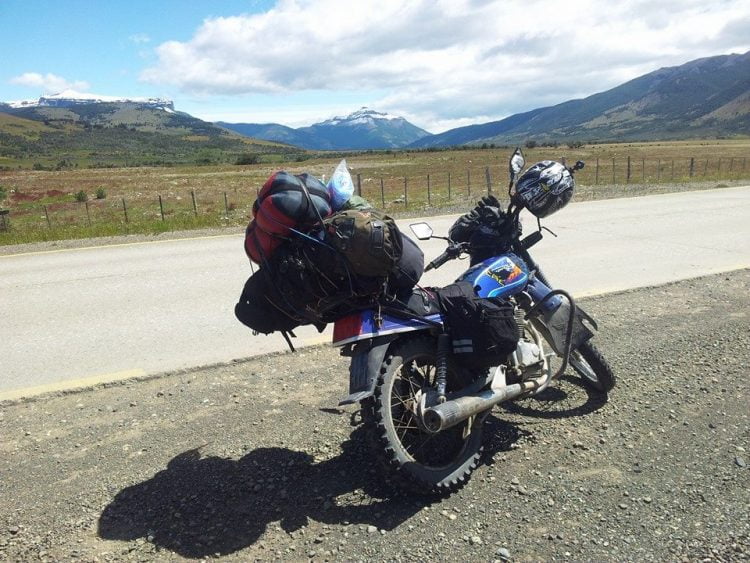 Once we got the bike, Ryan rode it to a small dusty plaza on the outskirts on Nazca, me riding pillion and feeling a little giddy. There, Ryan taught me how to start and stop, use the clutch and the brakes, and do a few figures of eight. Two hours later, I felt I was ready to cross Peru on two wheels.

Having done a few important mods on Blinkin the Bike (named so after one of the characters of Men in Tights), such as this dashboard set up: 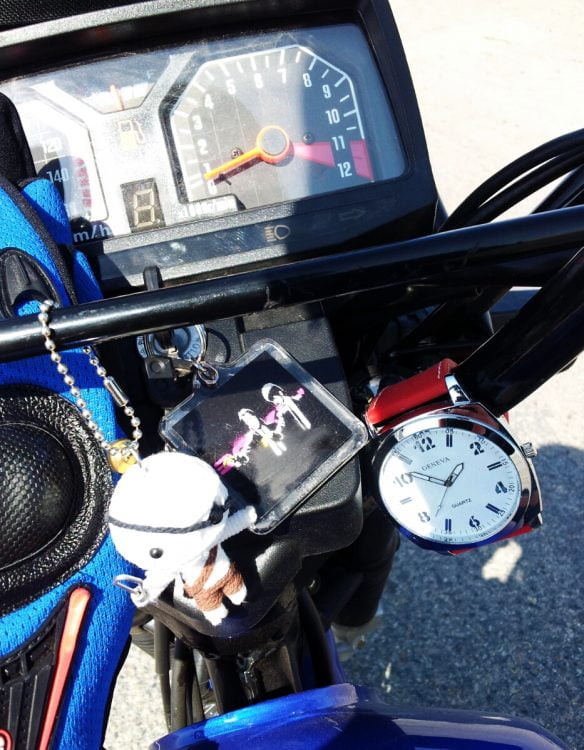 I hit the road. The road immediately hit back: not having any luggage, I simply strapped my backpack on the tail of the bike, and, as this was my first ride out, I was taken unawares by the shifted weight and kissed the pavement while trying to navigate out of Nazca using mostly intuition and the flow of traffic. No matter; I picked the bike up and carried on – it was so light and so easy to handle I felt pretty confident I’d figure this motorcycling thing out.

And I did. With tons of newbie mistakes, crashes, flights off bridges, first attempts to ride sand, flat tires, and slack chains, I somehow made it to Ushuaia and back up to la Paz, Bolivia, where Blinkin likely still lives being used as a delivery bike. I lost the license plate somewhere in Southern Bolivia yet was allowed to cross Argentinean, Chilean, and Bolivian borders without it; I had to hitchhike once in Patagonia when I couldn’t fix a flat, but I did a temporary headlight fix in Tierra del Fuego I’m still proud of: 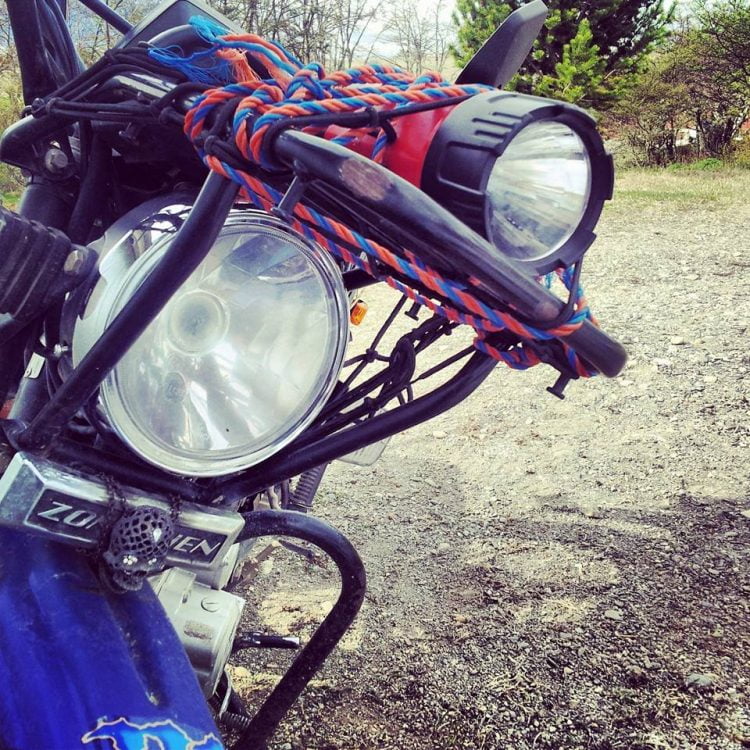 All in all, although I was slow, terribly useless off-road, crashed often, and didn’t know I needed to maintain the chain until it literally fell off somewhere in Argentina, I felt that my motorcycle journey to Ushuaia was a smashing success. In fact, I still do – I might have moved to bigger bikes, better luggage, and nicer gear, but riding is riding, right?

Back in the West, riding motorcycles is still seen as this big deal. Learning to ride a motorcycle is still a huge quest, falling off is seen as awfully uncool, and god forbid you don’t know what “carburetter” means. For me, however, riding is still simply about fun and freedom, regardless of whether your bike came from a BMW showroom or a washing machine shop.

How did you start riding motorcycles?