Last week in Las Vegas the gavel fell hard, closing trades on hundreds of motorcycles ranging from century-old classics (see 1930 Brough Superior SS100 above which sold for 239k USD) to 45 year old superbikes.  Early twentieth-century Brough Superior bikes generated top sales figures. Together, two of these machines traded for over half a million dollars.  The beauty and power of the 1930 Superior SS100 define motorcycle art. At the factory, each machine was track tested to exceed 100mph making it the fastest vehicle on the road,  two wheels or four. 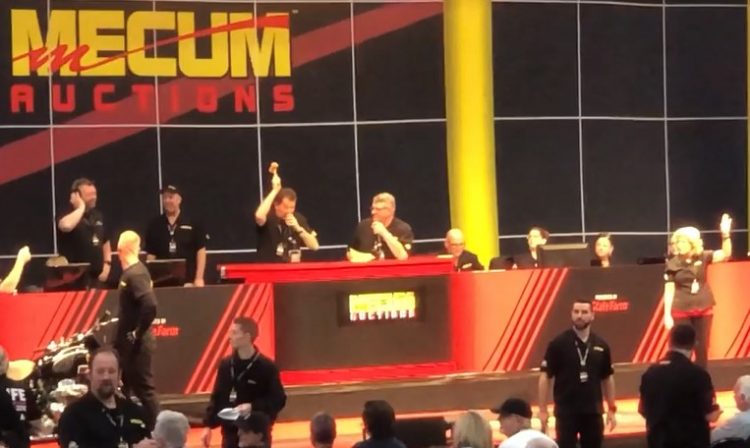 Walking through the venue at South Point Casino, visitors witnessed an arena lined with hundreds of classic motorcycles.

The closing quarter of the twentieth century saw the rise of the production superbike.  At auction, the 1974 Ducati 750SS was the top earning, late century superbike. At this same venue last year a similar Ducati (so-called “green frame”) went for just under a quarter million USD. 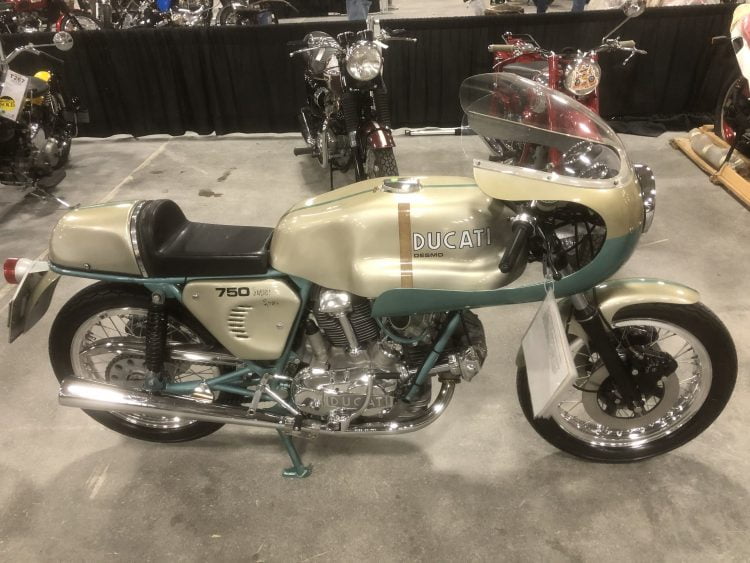 Witness 50 and 60 year old men grinning as they conjure up memories of grasping onto these unruly projectiles. Early two stroke street bikes had primitive tube steel frames making speed wobbles a certainty. These machines gasped out contrails of blue oil injected smoke. They made a terrifying chain saw like racket but none of that mattered to the victorious triple two stroke rider.

Throughout the 1970’s Honda’s CB750 Four was a production Goliath.  The auction left no doubt that these bikes would be in good supply for generations to come. Deja Vu hit attendees hard as they found themselves transported to a 1970’s showroom floor. 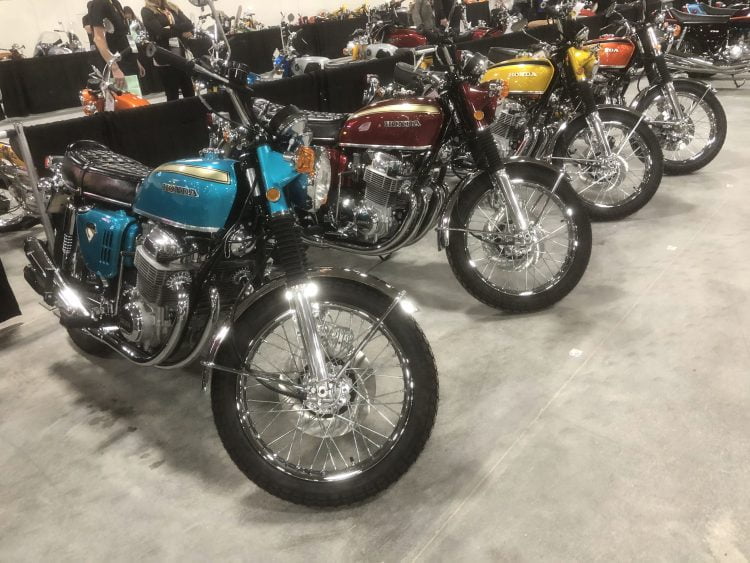 By mid-decade, Kawasaki pushed the envelope further introducing the 4-stroke, DOHC 900cc Z1.  Clearly the styling and power of this beautiful beast has stood the test of time.

As the decade closed, R&D labs were busy.  Honda, driven more by the bottom line than the finish line, focused on increasing market share by appealing to a broader riding public – enter the Hondamatic CB750A.  One long in the tooth auction goer commented, “smoothest bike I ever owned”.  Notice the torque converter tucked behind the point cover where the clutch basket used to be.  Also, note the alloy wheels, Honda would push those to volume production on the sleek Honda 750 SuperSport due out the same year. 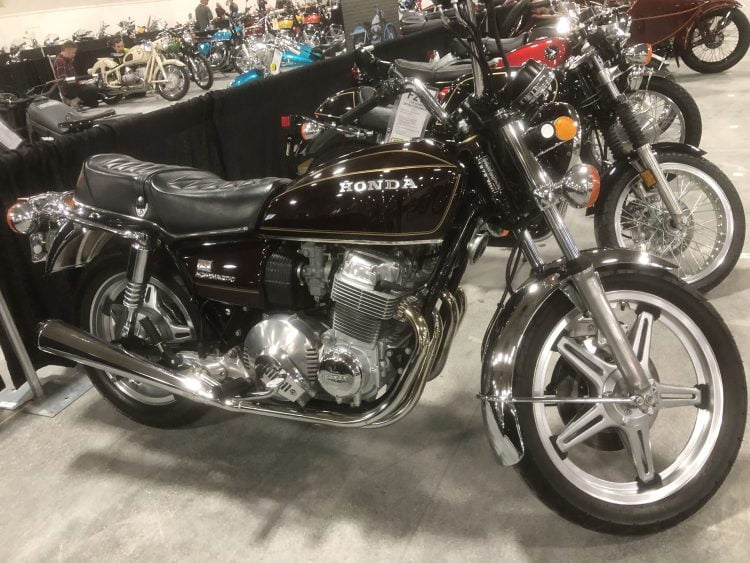 Suzuki special project engineers introduced the RE5 in 1976.  A bold experiment with a 500cc rotary engine built on the 750 “Water Buffalo”  frame, truly a low volume collectible. 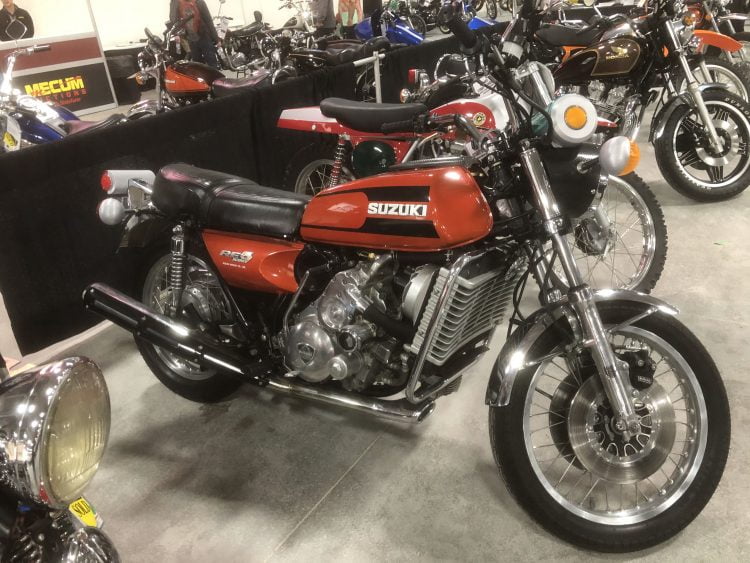 In 1977 Kawasaki, with the need for speed deep in the corporate DNA, came out with the Z1R Turbo Charged motorcycle.

The 1980’s saw Yamaha keep the 2-stroke street tradition alive by continuing with the popular RD come RZ350.  Liquid-cooled and oil-injected this ride was a time proven, lightweight performer.

The bold styling of the 1982 Suzuki GS1000 Katana marked the beginning of that very successful line of bikes. 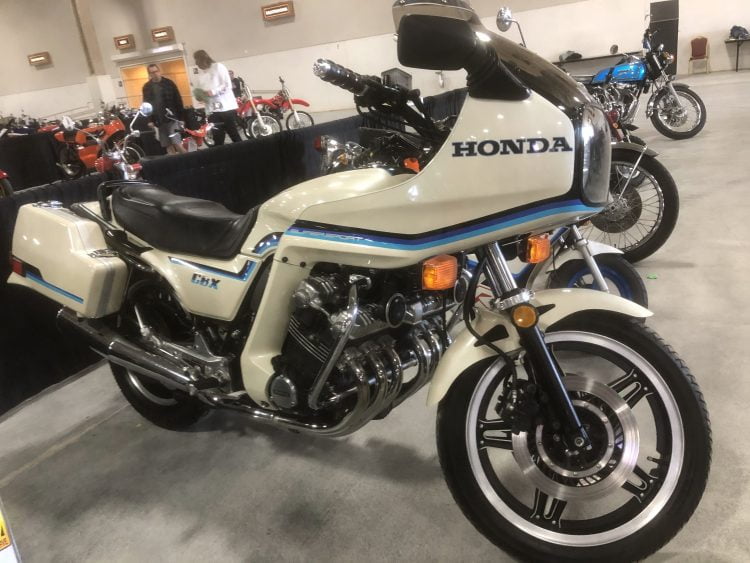 This is only one glimpse at a generation of motorcycles.  Mark, your calendar for next year and search out the genre that gets the juices flowing.

As a closing image, here is a timeless machine that would be the pride of anyone’s collection, a 1948 Indian Chief. 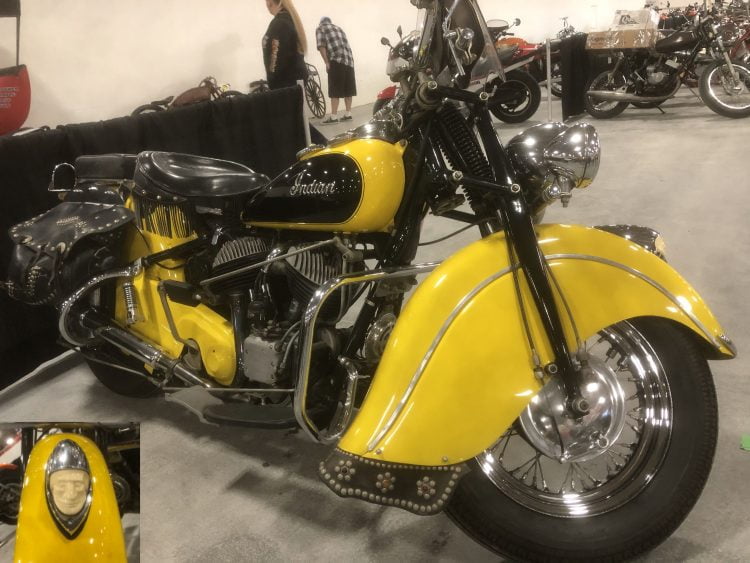