Walking by the Honda booth at the IMS show, you might first get the idea that Big Red has forgotten about adventure bikes. Marc Marquez’s 2013 MotoGP-winning racebike is front and center, and side-by-side UTVs tower above all the bikes on display. No surprise, really: the SXS market is red-hot, and Honda’s also keen to push its new litrebike, the CBR1000RR-R (which was possibly named by pirates, there’s so many Arrrr’s in the name!). 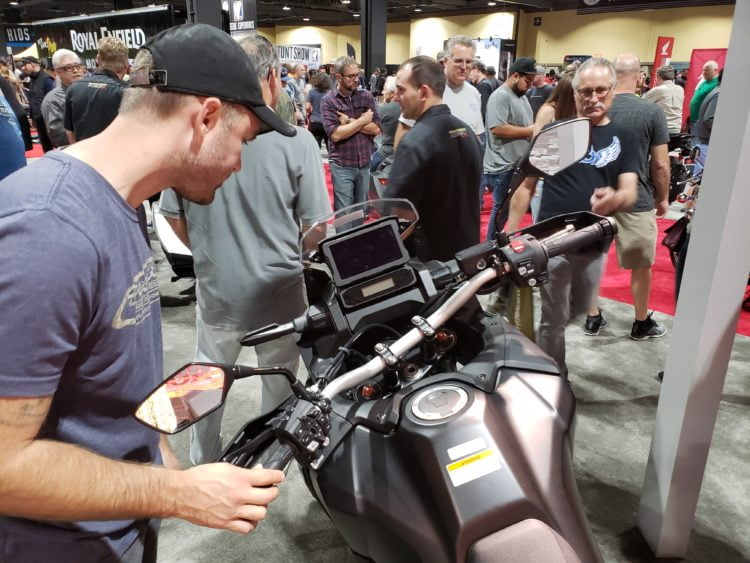 But, if you look again, you’ll realize why you might not have seen the adventure bikes at first: there’s a long line of riders of all ages throwing their legs over the dual-sport and ADV machines, so many that it’s hard to catch a glimpse of them sometimes.

The big news for Honda is the updated Africa Twin. The new-for-2020 CRF1100L has a sort of shrine built for it at the back of Honda’s display, with a steady supply of interested riders—mostly riders middle-aged and above, when I was there, which was no surprise. They’re the ones who’ve saved up the money for the big new bike (see the initial run-down of the machine’s features here). 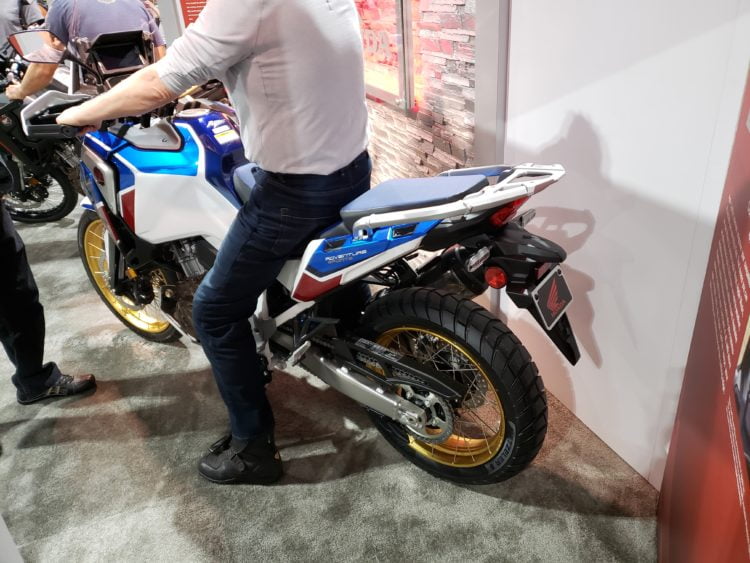 Plenty of riders were trying the new CRF1100L on for size. Photo: Zac Kurylyk

The dual sport lineup is lined up in front of the Africa Twin. There’s the CRF250L (no changes for 2020), the CRF250 Rally (no changes for 2020) and the XR650L (no changes for 2020). These bikes are considerably more budget-friendly, with a younger crowd interested in them. The XR650L is really becoming a dinosaur, with its old-school carbureted single-cylinder engine—not that that’s a bad thing. It’s basically unchanged since its debut in 1992, but for riding fast in the wide open spaces, it’s a formula that works. If you’re still interested in a big carbureted six-fiddy, now’s the time to buy, though; the XR has even vanished from the Canadian market now. Sooner or later, it’ll disappear from the US, too, and it won’t be back.

The CRF450L was slotted here as well, with no changes from its initial 2019 design.

On the other side of the display, Honda’s got its updated-for-2019 CB500X. Some markets didn’t get this bike until late 2020, so if you’re still curious about it, here’s a good chance to see if it’s a reasonable middleweight for you. Honda put better suspension on the 500X last year, as well as a 19-inch front wheel (still a cast wheel, not spoked), some engine tweaks, a new clutch and other adjustments. If you didn’t get a chance to check it out last season, now’s the time to do so.

The XR650L, unchanged since the stone age. But sometimes that’s a good thing, if you want the reliability of an axe. It’s back for 2020 with no updates. Photo: Zac Kurylyk

The CRF450L. Honda pushed this bike big in 2019, and it seemed to get no special treatment at all in the display now. Photo: Zac Kurylyk

And then there’s the Monkey and SuperCub. The Monkey may only a be a Grom-based minibike, but it was getting plenty of attention. Maybe it won’t bring as many new riders into the scene as the original minibikes did, as it’s more for goofing off than actual riding, but it was definitely catching the eye of a lot of younger riders. As for the SuperCub, this may be a retro-styled scooter, but for millions of riders around the world, this is day-to-day transportation in areas that ADVers are using their GS/Tiger/whatever to get to. Will the SuperCub inspire people to strip down their motorcycle plans, taking a smaller-displacement machine on trips, enjoying the journey more than simply filling a need, a need for speed?

We’ll see. At $3,649, it’s priced exactly where it needs to be, and this could end up being Honda’s sleeper bike for 2020 (and not just because it’s slow enough to make someone doze off at the handlebars).

So, what’s it looking like for Honda overall? Big Red has been overly cautious in recent years, not moving with the aggression that typified the company in its earlier years in the US market. But, it’s slowly, steadily improving some bikes (Africa Twin, CB500X), and just continuing to keep an even keel with other machines (CRF250L, CRF250 Rally, XR650L). While it would be good to see all the lines getting better and better all the time, the reality is a slow development schedule keeps machines like the 250s at lower price points, and allows the aftermarket to develop products without the fear of model changes making those products irrelevant shortly. As for the Africa Twin and 500X, those haven’t been progressing at a breakneck speed either, but they are getting better.

That’s a better approach than, say, Yamaha, which hasn’t updated any dual sport or adventure model in years (unless you count the Tenere 700, which has taken forever to get to market).

The Monkey isn’t a serious bike, but it sure looks like it puts the fun in funky. Photo: Zac Kurylyk

The Monkey is more likely to end up at a cottage, or becoming a machine for goofing off in parking lots, than a serious commuter. Photo: Zac Kurylyk

Although it’s an old-fashioned design, younger riders were interested in the Monkey. Photo: Zac Kurylyk

Another thing Honda is doing right: It’s got a bike for everyone. Whether you’re a kid who wants an affordable 250 for commuting or transportation, a 20-something non-licenced rider who wants a minibike for parking lot hoonery, or a mid-30s professional who wants an easy-to-ride 500 for learning, or whatever—Honda has a dual sport/ADV bike for you. It’s currently got the most diverse street-legal offroad lineup in the business. 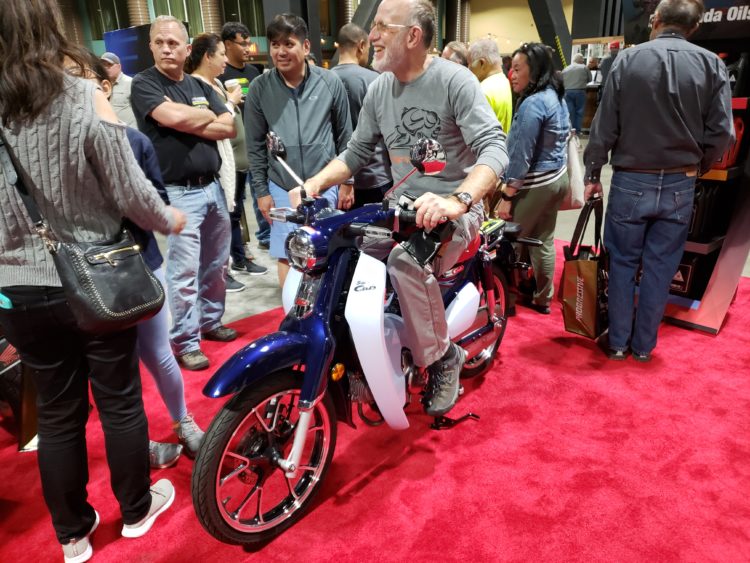 A throwback to the glory days of Big Red? Actually, Cub-based designs are still popular around the world, but this updated Super Cub design is a great re-introduction to the US market for Honda. Photo: Zac Kurylyk

One last interesting observation: The CRF450L, which Honda pushed hard for 2019, wasn’t highlighted at all in its 2020 model display. It was there, but it wasn’t a big deal. Is Honda just working hard on pushing the new CRF1100L and the 450 is last year’s big news, or did the 450 fail in its attempt to grab back sales from the Euro enduro-style duallies? It will be most interesting to see if its MSRP rises or falls in the next year or two, with some talk of steep end-of-season discounts and leftover models from the initial 2019 production run.