According to multiple outlets, Indian Motorcycle has filed trademark applications for the mark “EFTR”.  And, it appears that Indian intends to use the mark on several continents.  The company has filed the mark at the U.S. Patent and Trademark Office, the European Union Intellectual Property Office, and IP Australia.

In 2015 Polaris purchased all motorcycle assets of electric vehicle manufacturer Brammo.  The company then rebadged Brammo’s Empulse electric motorcycle.  They slotted the Empulse into its Victory motorcycle product line, made some minor changes, and called it the Victory Empulse.

Unfortunately for the Empulse, Polaris decided to close the Victory Motorcycles brand in 2017.  It was at that point that the Victory Empulse was no more. 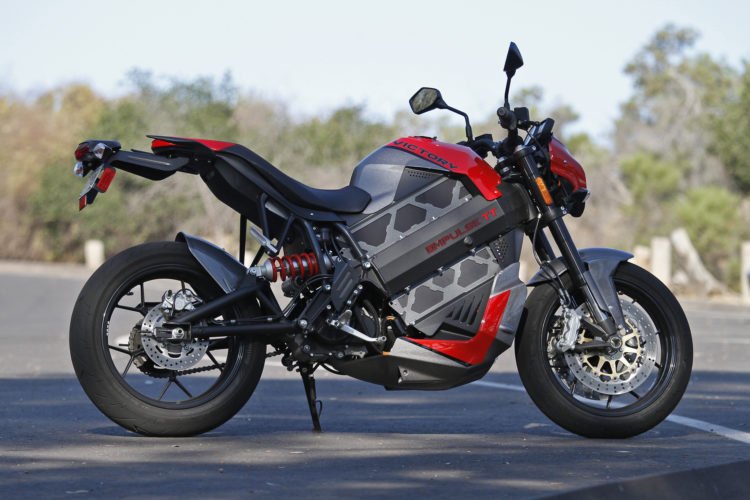 After Polaris purchased Brammo, it made some minor changes to the Empulse and re-introduced the machine as its own Victory Empulse. Photo credit: L. A. Times

But apparently, Polaris thinks that the time may be ripe to start thinking about re-opening its electric motorcycle product line.  It likely can’t just start producing a rebadged Victory Empulse, however.

Since the closing of the Victory brand, a lot of water has flowed under the bridge.  The Victory Empulse’s specs aren’t up to today’s standards.  The Empulse claimed 54 HP and 61 lb-ft of torque along with a range of 140 miles for $19,999.

If you compare those figures to a current-day Zero SR/F, the Empulse comes out pretty far behind.  For its standard SR/F, Zero claims 110 HP, 140 ft-lb of torque, and a range of 161 miles.  That performance is available for a similar $19,495 price.

So if Indian is indeed forging ahead with an electric motorcycle of its own, it will have to up its game.  The Indian FTR is based on a modular platform, so perhaps there is some benefit there.

Indian’s filing for trademark protection is no direct indication that the EFTR will actually go into production.  But it at least looks like Indian is interested in electric machines.  We’ll just have to wait and see.