Indian’s brought its new FTR Rally to Long Beach’s season-opening IMS show, and while it may not be a cruiser, it seems the plan is to run the same game plan: sell the bike, and then offer a boatload of accessories.

The FTR Rally first debuted at the EICMA show earlier in November. Indian isn’t calling it a scrambler, at least not officially, but it’s sort of built along those lines. Or maybe you could call it an up-to-date iteration of a factory flat tracker? Whatever hole you slot it into, it’s basically the FTR1200 with spoked wheels, vintage-look seat, upright dual sport ergos, upside-down forks, radial-mount brakes and a set of tracker-style Dunlop DT3-R tires that appear to be unique to the bike. 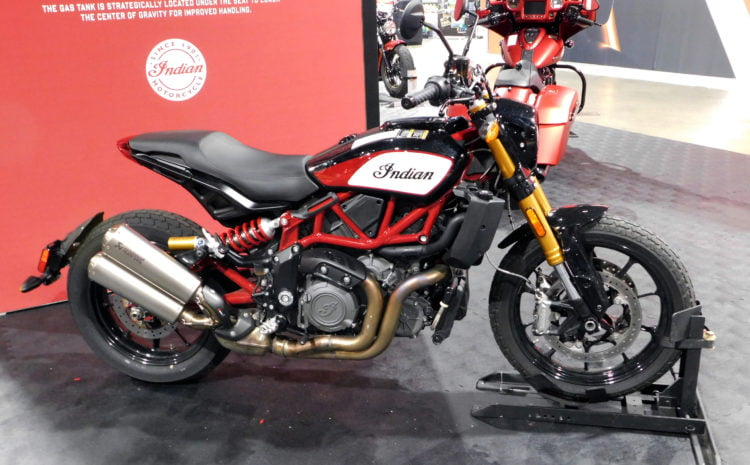 The FTR Rally is sort of a factory flat tracker or maybe a scrambler. Photo: Zac Kurylyk

At time of release, Indian said this bike was intended for use on city streets and canyon roads. However, a look at one of the display bikes seemed to hint the machine was being used for a little more than that, with a slight build-up of crud on the inside of the rear fender and in the treads of the rear tire. Maybe Indian staff wasn’t hooning in the sand dunes on this bike, but it could probably handle a little bit of gravel, as long as you didn’t push it hard enough to start breaking things. Talking to the promotional staff, that’s certainly the idea Indian wants to get across anyway—and why wouldn’t they? They get to sell you expensive replacement parts when things break … 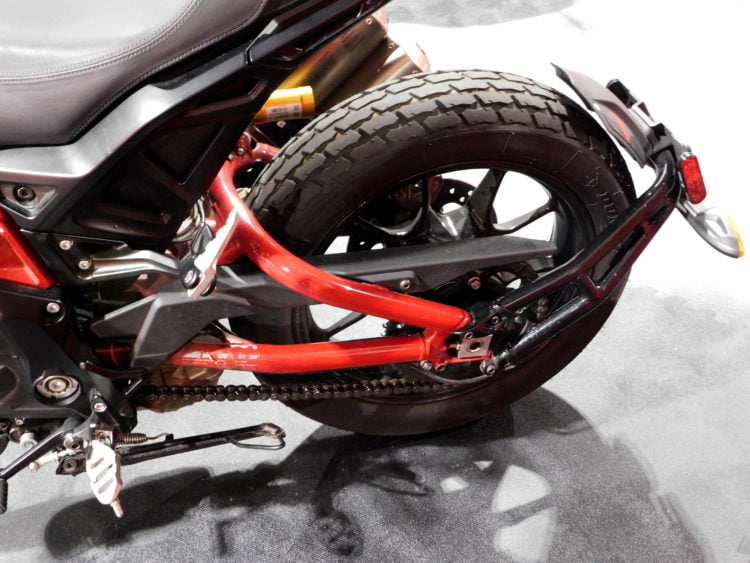 The tires are supposedly specific to this model, from Dunlop. Photo: Zac Kurylyk

Actually, Indian still wants to sell you lots of pricey parts, even if you aren’t breaking bits with ill-advised Bud Ekins impressions. Along with the stock FTR Rally on display, Indian had a blinged-up version on the floor next to it. A little flyscreen, an Akrapovic exhaust, a front fender brace, high handlebars—the booth rep said the parts added up to about $5,700 extra over the stock bike. That’s a lot of dough, although it certainly is cool to see manufacturers thinking outside the box, with parts like removable “gas tank” panels (actually, air box covers) that allow you to change your motorcycle’s paint scheme in minutes.

This blinged-up take on the FTR Rally adds a considerable amount to the price tag. Photo: Zac Kurylyk

Another cool thing: Indian made a lot of noise about this bike’s supposed race-bred pedigree when the original FTR1200 debuted. Of course, it was a lot different from the FTR750 engine, but Indian’s turned around and based some Super Hooligan racing machines on the FTR1200. Is that art imitating life imitating art? Maybe, maybe not, but Indian says that while the Super Hooligan bikes obviously have trick chassis and suspension parts, the engines in those bikes aren’t really tweaked much over the stock models. If that’s true, that is certainly a testament to the engine’s strength.