If you are a lover of tattoos and Indian motorcycles, Indian has something for you.  The Polaris owned company is now marketing a tattoo ink “made with carbon from an Indian motorcycle.” The ink is the result of a partnership between Indian and former freestyle motocross competitor, current off-road truck racer, and Hart & Huntington Tattoo Company owner, Carey Hart.

Indian says that Hart “most definitely has riding in his blood.” Indian claims their new tattoo ink will “prove that fact in a way that’s half genius, half insane.” To make the ink, the manufacturer collected the carbon left by a burnout from Hart’s Indian Super Hooligan motorcycle and the machine’s exhaust pipe on May 22, 2017.  The collected material becomes a pigment in the tattoo ink. 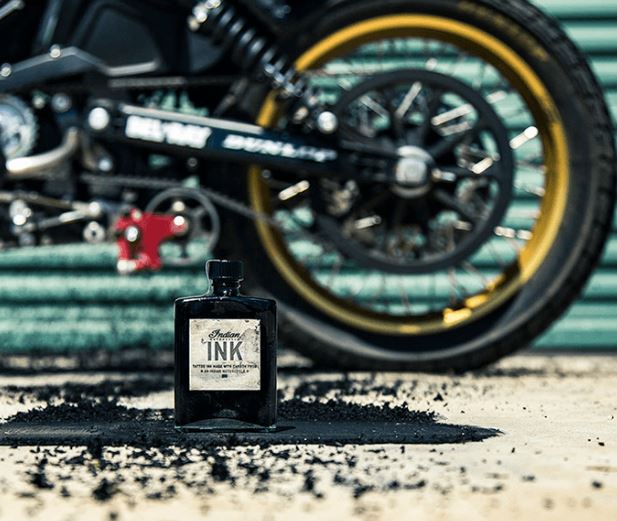 This picture speaks for itself.

The result of the collected carbon is added to “Indian Motorcycle Ink”. Artists are now using it at Hart & Huntington and Vatican Studios “for a limited time.”

Is the tattoo ink safe?

If you are wondering how a tattoo ink laced with the remnants of a smoldering motorcycle tire and smoking exhaust pipe is safe, you’re not alone.  According to Hart’s longtime tattoo artist Franco Vescovi, the ink is sterile and safe.

“The carbon simply acts as a pigment carried by the alcohol suspension. In fact, many black inks on the market use carbon as pigment. Ours just happens to come from a smoldering motorcycle tire and a smoking tailpipe.”

So if tattoos are your thing, and you love Indian motorcycles, perhaps this ink is for you.  What do you think of the Indian branded ink?  Is it just a gimmick, or is it a way to show your devotion to Indian motorcycles as Indian claims?  Let us know in the comments below.