When Indian Motorcycles was revived by Polaris, the company’s first target was obvious. Indian builds cruisers, big heavy cruisers—and so does Harley-Davidson. Indian was going to have to lure customers away from the Motor Company, and in the past few years, it’s done so. Now, it’s planning a campaign to take even more. Maybe.

According to Visordown, Indian is working on a new ad campaign worth seven figures, all aimed at setting up a brand vs. brand battle, pitting Indian’s performance (and likely pricing) against Harley-Davidson. In fact, we’ve already seen some of the opening shots of this gunfight, from Indian, and Harley-Davidson’s responded with some epic comebacks (the image below was shared widely via social media, but was said to be unofficial, something dreamed up by bored H-D marketeers, but not actual sanctioned company communication). 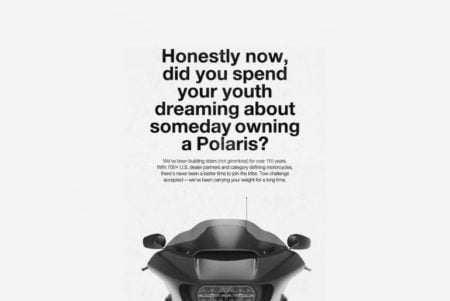 So, the gloves are off. In fact, that’s a very apt metaphor, because one of the places Indian wanted to run these scrappy new ads? At NHL hockey games. Part of the reason for the massive ad budget is Indian was hoping to show these adverts at pro sporting events like the NHL and the NBA, says Visordown … and now there’s a problem. The NHL and the NBA have postponed their remaining games for now, due to COVID-19, and the rest of the season is in doubt for both leagues.

Maybe that’s a good thing for Indian. No doubt budgets are going to be tight at every motorcycle manufacturer in coming months, thanks to the coronavirus outbreak, but it’ll likely affect the V-twin luxury market the most. A penny saved is a penny earned, and “seven figures” worth of pennies is a lot of savings. A year from now, it might make a huge difference to Polaris and its two-wheeled subsidiary.