This is the second part of a two-part series about Wendy Crockett, the first woman to win the Iron Butt Rally (IBR).  In 2019, Wendy scored 154,086 points and rode 12,998.9 miles in 11 days to beat all other competitors, male and female.  Her mileage score was the second-highest total miles of all time for the IBR.

Also, please don’t forget that Wendy’s mom needs a kidney desperately.  If you have considered donating a kidney, here’s your chance to help Wendy’s mom.  Contact Wendy via Facebook Messenger or Private Message on ADVRider inmate Bionic Pelvis.  Thanks!

Competing In The Iron Butt Rally

ADVRider: What do you think the most difficult aspect of riding in an IBR is?

WC: Your helmet time.  It’s the time after you’ve made your plan, trying to ride your plan and you start to wonder whether it was the correct thing to do.

You start thinking of things like, “What did I miss?” or “Why did I just see a competitor going in the other direction?”  The mental aspects are probably the hardest part of the ride.

In addition, no support is allowed.  If you have mechanical or tire issues, you have to figure the answer out yourself.  If you are stuck in a downpour and have electrical problems, you still have to use your head and figure out how to deal with it.

ADVRider:  If the hardest part of Iron Butt riding is mental, what do you do to “keep your head in the game?”

WC: I call my husband and vent to him.  He listens and keeps me stable.  He’ll tell me things like, “You’ve been through this before.  You can do it.”

I also listen to podcasts and music.  Half the time I’m just actively enjoying being on the bike.  I don’t find myself having to keep myself focused.

Wendy riding the Tail Of The Dragon.

ADVRider: Let’s talk specifically about this year’s event and your win.  What was this year’s theme and how did you approach it?

WC: The theme was “Roads Less Traveled”.  The IBA tried to make the event less highway oriented and get riders on back roads.

To add some complexity, some of the bonus locations included physical events.  One of them required a 5 mile hike to get the bonus.  Because I train, I finished the hike in 1 hour 20 minutes.  Other competitors I spoke with afterwards said that they took over 2 1/2 hours and that there was no way that the hike was only 5 miles.

To me, this is one of the things that makes the rally interesting.  The fun is in the puzzle and developing a good strategy.

ADVRider: You said that the organizers wanted to push riders towards back roads.  What do you mean by back roads?

WC: They were trying to get people on two-lane roads and having the riders see lesser known bits.

ADVRider: When you say two-lane roads, are the roads always paved?  Are there dirt roads or technical sections?

WC: There were lots of dirt roads if you chose to ride them.  There were even some pretty agressive single track locations. 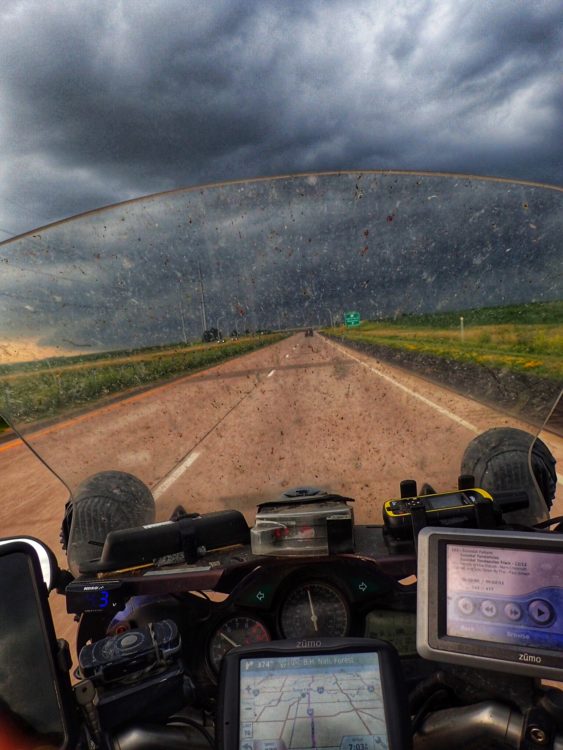 WC: Yes, there were some pretty aggressive single track sections.  But the organizers will tell you in the Rally Pack so you know what you are up against.  But some people didn’t read the Rally Pack carefully and found themselves on some difficult terrain.

ADVRider: Did you ride dirt roads this year?

WC: Yes, but I didn’t ride a ton of them.  I don’t shy away from dirt roads.  I have ridden the FJR all the way to Inuvik in the northern part of Canada’s Northwest Territories.

It depends on how I think the event is working out.  I’ll generally ride all day and all night and through the following day.  At 2 – 3 in the morning of day three, I stop and get 4 – 5 hours rest so that when the sun is up, my brain resets for a new day.  I also get some rest at checkpoints, usually 5 – 6 hours while there.

ADVRider: For the little time that you get to rest, what are your sleeping accommodations like?  Do you camp, get a hotel/motel?

WC:  I’m a very light sleeper so I generally opt for a hotel even if it’s just 3 – 4 hours of sleep.  At least I know it should be quiet and I know I will get some rest.

But this rally was different.  I only got one hotel.  All the other times I just slept where the opportunity presented itself.   Like when I was waiting for a ferry, I just slept on the ground next to the bike.

Repairs On The Road

ADVRider:  Did you have to cope with any unexpected contingencies? 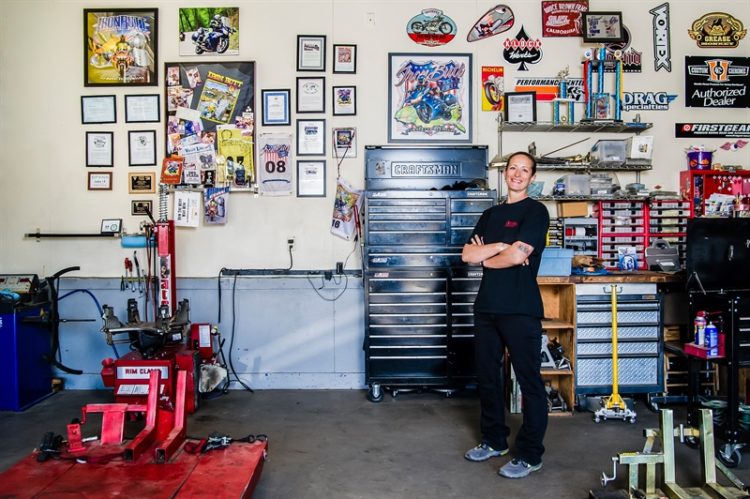 Wendy knows her way around a toolbox and shop.

ADVRider: Often speed limits may be slower than you would like to go.  Can you win the IBR while staying within posted speed limits?

WC: I am the person that gets caught.  I go just a hair over, but not enough to catch anyone’s attention.  If you start getting frisky, you use more fuel and can end up getting “performance awards” that take time.

On top of that, all competitors have satellite trackers.  The IBA is watching what we are doing and if you consistently ride at too fast a pace, you will likely lose points or be disqualified.

ADVRider: Have you ever been stopped by the police during an event?  If you have, what was the outcome?

WC: I’ve only been stopped twice.  Once in the desert, another rider and I along with a group of cars were all stopped by the police.

The police officer came up to me first and asked me if I was in a rush.  I told him, “Not anymore”.  The cop just laughed and told me to slow down and let me go.

The other time I was riding in a group of cars and was just passing a semi when a cop caught me.  He pulled me over and was gone for about 35 minutes.

I’m thinking; what’s taking him so long, I’m going to miss my bonus window.  Finally, he comes back and told me he was super sorry and that his wife just called him and told him that the house was broken into and things were smashed and stolen.

I sat there listening thinking; Oh yes, I am going to get off on this one.  So when he finally finishes his story he goes; “and here’s your ticket!” 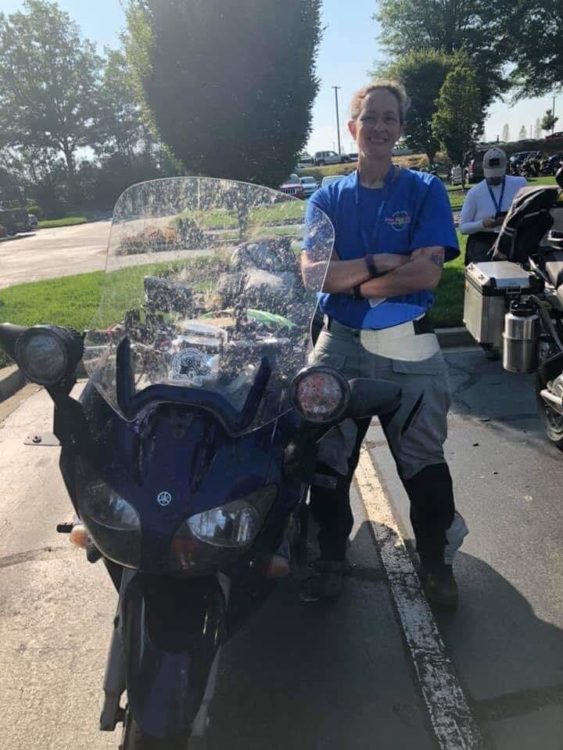 ADVRider:  What about bike maintenance?  Did you change the oil during the event?

WC: No, I run Royal Purple and it’s good for an entire rally.

ADVRider: Do you run the same set of tires for the entire event?

WC: I have a spare rear wheel and tire ready to go.  I meet my husband at a checkpoint and I change it there in about 20 minutes.

ADVRider: What about fuel stops?  How long do they take?

I plan about 5 minutes to fill up.

ADVRider:  We’ve talked about riding the IBR itself, but we didn’t talk about the additional riding that you did just to compete.

WC: Yes, I ride to all the events to participate.  On the way to this year’s IBR, I put on more than 1,500 miles in 23 hours.  It helped to get my body ready for the long first overnight on the ride there.

Wendy on the cover of the American Motorcyclist magazine.

Being A Role Model

ADVRider:  I recently wrote an article on Angelle Sampey, the four-time NHRA Pro Stock Motorcycle Champion talking about how difficult it was for her to become a role model.  Now that you are not only a woman Iron Butt rider but also an Iron Butt Woman Champion rider, do you think you are role model?

I agree that it’s weird to me.  I guess that it’s a big deal, but I don’t know how to take that in.  When people say you’re a great inspiration, it’s something I’m trying to wrap my mind around.  It’s a little bit weird that I had a blast and then somehow I became a role model.

ADVRider: Do you think you get the proper respect from your male competitors?

WC: Yes, it’s really a welcoming group.  I’ve always felt welcome.  Never have I felt weird or an felt like an outsider.  It’s different than being a shop owner when a male customers tell me, they want to talk to the real mechanic and walk over to talk to the parts guy.

ADVRider: Could you tell us some things that “non-Iron Butt” riders would be surprised to find out about you and your fellow competitors?

WC: I think what surprises people most is the genuine camaraderie among the riders. If you’re a rookie rider, or just a hopeful hanging out at the starting line, you’ll have no problem finding a rally vet to share some tips, tricks & wisdom. If you’re a rider having bike trouble, I guarantee that other riders will jump in to help.

I’ve helped competitors troubleshoot problems, make repairs, and provided tools & spare parts out of my stash. This year my husband helped one of my fiercest competitors fix some bike problems at the checkpoint. There are always tales of one rider helping another out on the road in the event of a breakdown or crash, often to the detriment of the assisting rider’s bonus hunting.

At the end of the day this is just a game. We are a tight knit community.  We will do almost anything to help each other out. It’s not unusual to have a strong camaraderie within riding groups or communities in general, but I think people are often surprised by the lengths we’ll go to aid a “competitor”.

ADVRider: One last question.  Do you have any tips for riders who may want to get into long-distance riding?

Yes.  Check out some of the smaller regional rallies all over the place.  It doesn’t take a big commitment in time and equipment.  Jason Jonas’ Ride Master website has a list of endurance rides and sign-up locations for various events.  You don’t have to worry about having the right bike.  You can ride whatever you have and use a paper map. 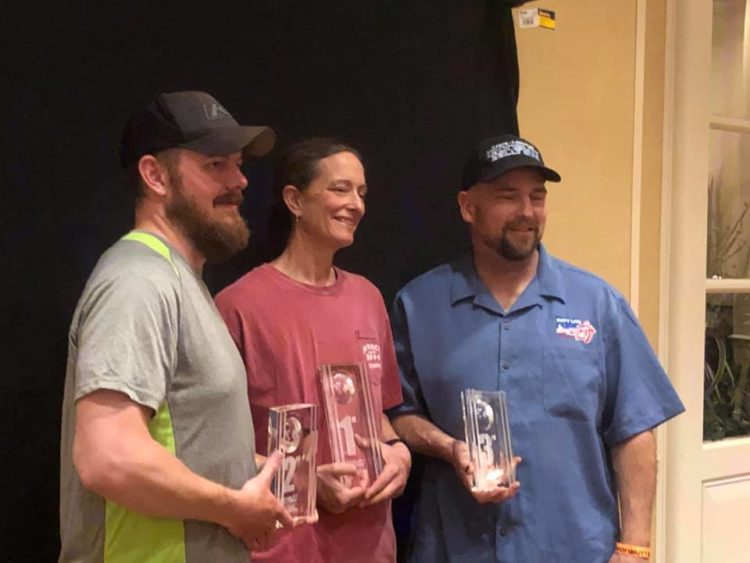 Wendy with the top spot on the podium.

So that’s the story of Wendy Crockett, the 2019 Iron Butt Rally Champion.  I came away with a new respect for Iron Butt riding and what it takes to become a champion.

I think Tony Stark may have some new competition out there.  It’s no longer just Iron Man, there’s Iron Woman Wendy Crockett.