So is there a reason that Harley would team with a Chinese company other than cheap labor? Perhaps.

Quanjiang happens to own the resurrected Benelli brand. So is it possible that Harley’s new motorcycle will be based upon a Benelli motorcycle? It is according to motorcycle outlet Asphalt and Rubber (A&R). 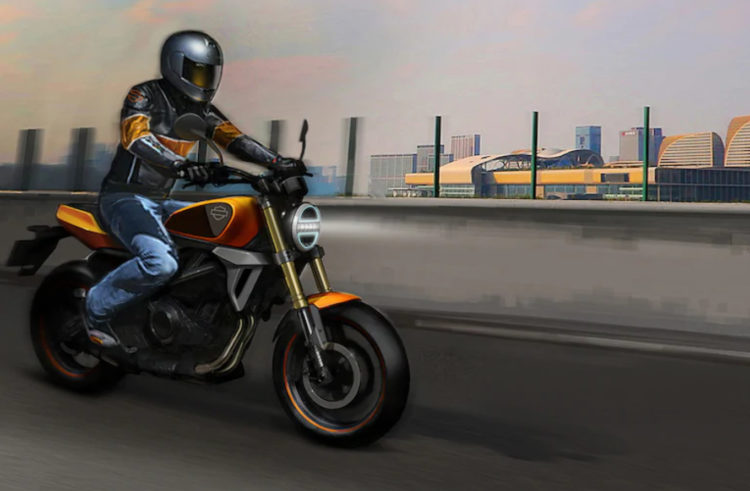 Harley’s rendering of what their new small displacement 338cc bike may look like. Image credit: Harley-Davidson

They’ve done some math and if their calculations are correct, the new bike will have its roots in a Chinese produced Benelli bike. So what is it that points to a Benelli derived Harley?

According to A&R, if you take the 69mm bore size from the current Benelli TRK 502 and tie it to a crankshaft from the Benelli Tornado 302 which has a stroke of 45.2 mm, the result is an engine having a displacement of 338cc. A quick check of A&R’s math shows that their calculation is correct.

So does 338ccs sound familiar? It should because it also happens to be the formally announced displacement of Harley’s new small bike for Asia. Hm.

Need a little more convincing? Check out this GIF provided by Ben Purvis that transposes the lines of the Benelli 302s and a sketch of what the new Harley 338 is supposed to look like. The lines are startlingly similar.

While all of the above is speculation, for now, it does seem to make sense. Harley’s deal with Quanjiang provides a lot of positives for the MoCo.

Obviously, one of the benefits is lower production costs. But there’s more than that to the deal. If the new 338 uses elements from the Italian branded, Chinese manufactured existing Benelli bikes, Harley and Quanjiang have just saved a boatload of research and development costs.

Even more, using existing parts should allow the duo to bring the bike to market much faster than developing a completely new machine using a clean sheet of paper approach. I can see the business model now. But is it good?

In its announcement, the MoCo said:

But if the two manufacturers are using existing parts from Chinese built Benelli bikes and a look similar to the Benelli 302s, could it be that Harley is all done being the “American” brand? Or is it just counting on its name to lure Asian customers to its brand?

These are all good questions. What do you think? Tell us in the comments below.