Recently there have been several outlets shouting that Husqvarna will produce smaller displacement siblings to its newly approved Norden 901. While that may be “news,” it’s not rocket science. It’s quite easy to envision that the Husky brand will also benefit from the modular platform concept that its sister company KTM adopted several years ago.

Stefen Pierer, the CEO of Pierer Mobility, which owns and controls motorcycle brands KTM, Husqvarna, Gas Gas, and WP, has been using the modular concept for years to build a product line that costs less and results in excellent product synergy. 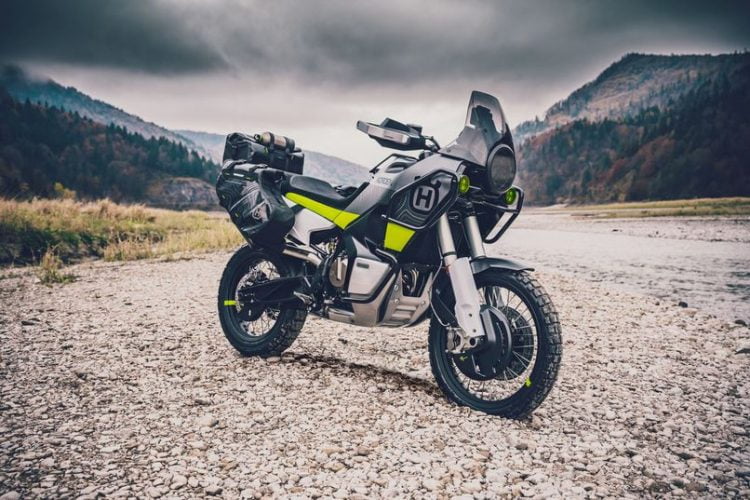 The Husky 901 was unveiled as a concept at the 2019 EICMA and was quickly green-lighted after it received rave reviews. Photo credit: Husqvarna

Take, for example, some of KTM’s recent achievements. KTM builds a new parallel-twin engine dubbed the 790 and stick that new 790 engine into a brand new adventure bike called the KTM 790 Adventure.

That’s all well and good, but if KTM stopped there, they would have spent a lot of R&D money developing a single motorcycle. But KTM didn’t stop there. They recognized that the 790 engine could be used elsewhere in their companies’ product lines. So they “simply” bored out the 790 engine and slipped it into the 790 Adventure’s frame (it’s not really simple, but much less complicated than developing an entirely new engine or an altogether new chassis). The result? The new Husqvarna Norden 901 and perhaps also the Duke 890. Now one bike has become three bikes.

Even better, because Pierer Mobility also owns WP, they can offer two versions of the same bikes based upon a “standard” or upgraded suspension designated with an “R.”

At this point, one bike could become six bikes built by a single corporation under two different brands. And, while the above is an oversimplification of what it takes to produce actual motorcycles, the modular concept is robust and tested. Pierer has and will continue to use it well.

So now that we’ve established that modular platforms can lead to more significant product lines at less expense, let’s talk about Husky’s future model portfolio. Since Pierer owns and controls KTM, Husky, and Gas Gas under the umbrella of Pierer Mobility, he’d be foolish not to take advantage of the DNA of the KTM brand and pass some of that over to his other brands, Husky included.

In the case of Husky, he will likely choose to dilute a bit of the KTM “Ready to Race” philosophy to ensure that both product lines don’t compete with each other. KTM will retain the “Ready To Race” philosophy while the Husky brand could exhibit a bit of a softer, more comfortable brand. He has already said as much in an interview with Cycle News.

Into the Mind of Stefan Pierer

If you’d like to get inside Pierer’s head a little, click over to Cycle News and read the extremely excellent two-part interview written by Alan Cathcart. Part 1 mostly centers on the Pierer companies and plans, while Part 2 has a bit more of a racing angle. The articles are an intimate look into Pierer’s thinking and his plan to build a motorcycle empire.

Now, let’s get back to Husqvarna and their product line plans. There has been a lot of media attention given to some Powerpoint slides that were said to have come from investor documents. And that’s true. The documents are not mysterious; you can find them on KTM’s website in the investor relations section.

You should see the documents in their entirety if you want to get Pierer’s big-picture view of his companies. As we discuss some of the slides, I’ll give you the links to the entire documents so you can see for yourself.

Below is the slide that garnered all the attention for the Husqvarna brand. You can find it the Investor Relations section of KTM’s website labeled Investors presentation of 8/26/2019. 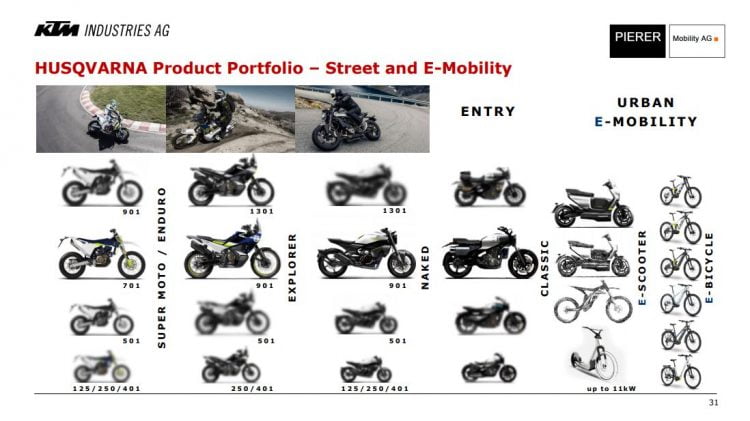 This slide got a lot of tongues wagging. Image credit: Pierer Mobility, AG.

It shows a potential lineup of Husky Products. It is not a guarantee that all these models will be made, but it shows Pierer’s thinking when it comes to the Husky brand. Notice that in the Husky “Explorer” product line (2nd column), there are Husky 1301, 901, 501, 401, 250, and 125 models.

Now, let’s take a look at the KTM brand slide from the same investor’s presentation. 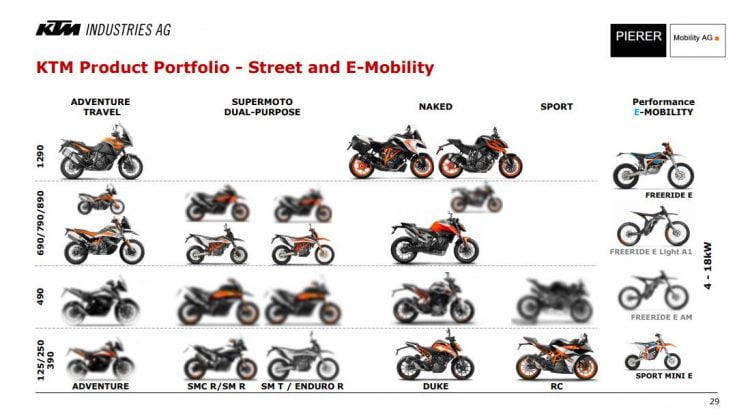 A slide from the same presentation as the Husky slide. Can you spot the similarities?

Using modular platforms, Pierer has built himself two complete product lines for the cost of one plus a little extra cash. That’s a recipe for success and one that automakers have been using for decades. Pierer has taken a page from their book and successfully implemented it.

While modular platforms can create more than one product line at a reduced cost, Pierer still has to make sure that one of his brands does not steal sales from his other brands.  And, he has already thought about that too.

On the other hand, Husky will become the brand that is just a little less performance-oriented but still highly capable and take you long distances in comfort. The Husky brand’s looks will likely be a bit more traditional and lean towards the “cool-factor” versus, KTM’s edgy performance above all philosophy.

Once again, it’s not a rocket science strategy, but Pierer’s plan has been amazingly successful so far. The Pierer Mobility brands KTM, Husqvarna, and now Gas Gas,  give Pierer the ability to build multiple models across several product lines at reduced costs.

So when you think about a new model coming from any of the Pierer Mobility motorcycle brands, think first about existing models and how smaller changes can result in a new machine. That’s what the folks at Pierer Mobility have been doing, and they are doing it quite successfully.