I’ve been writing for ADVRider.com for almost two years now.  During this period, I’ve had the extreme pleasure of being thanked for writing certain articles.  I’ve also been insulted and told that my work is garbage.  I try to take it all in stride, but sometimes the insults significantly outweigh the positives.  And I fear that that kind of attitude is growing in the motorcycle community.

I started writing for ADVRider.com because I loved the forum and the people that start and contribute to the thousands of threads.  Especially the threads in “Epic Rides.”  I learned a lot.  In return, I wrote my own ride reports and hoped that mine at least equaled or gave back more than I took out.

But in the last couple of years and the beginning of the new front page, I get the feeling that that trend is making a bit of a U-turn.   I hope it isn’t, but it feels that way.  I’ve noticed that disparaging comments are becoming more and more common.

Then there are the comments that belittle someone else’s opinion or a particular type of riding.  “My kind of riding is the only “true” riding (pavement, vs. fire roads, vs. single track, vs. mountaintops with only two inches of earth on either side.   We also like to argue about what kind of riding styles are the “real” riders (enduro, ADV, pavement).  “You’re just going on riding a holiday.”

Why is it that some of us feel compelled to knock a segment of motorcycling down while building up the kind of riding we like?  I’m sure you’ve seen these kinds of comments.

You get the drift.

So why is it that some of us feel compelled to belittle other types, brands, and genres of motorcyclists?  Don’t we all have one thing in common?  Isn’t it the love of two wheels, the freedom to travel, experiencing the outdoors, challenging ourselves, and perhaps learning something along the way? 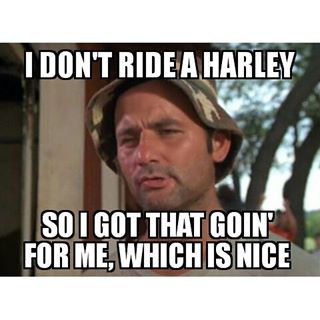 Even Carl Spackler is in on it.

What compels us to crap on someone else’s love of motorcycling?  Is it because those kinds of comments make us feel superior to other riders?  Or perhaps it’s just the opposite.  Some of us may feel inferior, and the only way to make ourselves feel better is to knock someone else down.

Frankly, I’ve caught myself being tribal at times, and when I catch it, I’m embarrassed.  I’ll admit that I’ve made fun of the cruiser crowd in the past.  There are several things about the cruiser stereotype (and many, many people do not fall into the stereotype) that I don’t agree with, nor would I want to be involved in.

I don’t agree with loud pipes and open-air blaring moto stereos.  I don’t agree with “protective gear” like beanie helmets and chaps.  But the truth of the matter is that not all cruiser riders fit the stereotype, and even if they do, they are fellow riders.  They love two wheels.  Wouldn’t we be better off building them up than trying to tear them down? 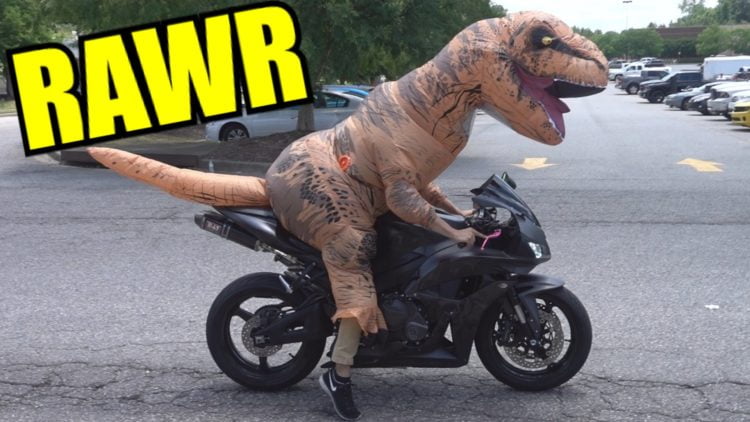 This is not to say that I’m never opposed to the things that some motorcyclists do.  As I mentioned earlier, I don’t like loud pipes or loud open-air motorcycle stereos.  I also despise riders that ride on closed trails, off-trail, or on private property without the owner’s permission.  I’m not OK with sportbike riders or stunt riders practicing their skills in heavy traffic.  And, the reason I don’t like them is that they are slowly but surely eroding our right to do what we love to do.  Ride motorcycles.  Speaking out against riders like this is not only appropriate but necessary.   Still, there’s no reason we can’t be civil when we discuss this kind of riding either with an individual rider or in a forum like ADVRider.

But if we are just talking about different kinds of riders or the kind of machines they ride, why is it so important for some people to try to make them feel less of a motorcyclist?  I don’t understand it.

As motorcyclists, we hate it when John Q. Public, or worse the Government says all motorcyclists are a “danger to themselves,” the environment and society.  That motorcyclists are nothing more than misfits, hooligans, and drunk/drug users that should be banned from all public roads and property.

We’re on the same team

So if that kind of talk gets our hackles up so much, why aren’t we banding together?  Why are we instead picking on each other, much like the people we think are so unfair to motorcyclists?  Wouldn’t we be better off if we all just treated each other as compadres?