I sneered. I admit it.

I saw Clutch Buddy on the AIMExpo list of exhibitors and once I found out what it was, I dismissed it.

I assumed that everyone did the same thing that I do — when they stop at light, they put their bike in neutral.

If you don’t though, if you feel safer keeping it gear, ready to go if there’s a problem, then you’re keeping your clutch lever pulled in the whole time you’re waiting.

Aaand I’m getting ahead of myself. By now you may be wondering what this thing is. The Clutch Buddy is a brand new product, first shown at Daytona Bike week and now at AIMEXpo in Las Vegas. They’re trying to build a dealer network.

It’s a simple, easy to install device that keeps your clutch pulled in while giving your hand a rest. You squeeze the lever, flip your thumb on the toggle and a spring-loaded “hook” comes up and holds the lever for you. A flip of your thumb releases it again.

Here, look at it in action.

It looks to be made with a high degree of quality and comes in regular chrome and black chrome. It costs $114.99 and while they’d rather you tried to get it from a dealer — Clutch Buddy is a subsidiary of manufacturer Putco and would rather be making and selling wholesale than selling retail — you can order it from their website.

It will fit any bike, any bar and you don’t need any tools. It comes with an allen key and they claim it takes just 15 minutes to install the first time, and is just as easily removed. They promise it won’t leave a mark of any kind on your bike.

So back to the conversation we were having. Who would use this thing? They pointed out that if you’re in stop-and-go traffic, it’s a bit of a pain snicking in and out of gear. If you keep it in gear, eventually your hand gets tired. That’s where a Clutch Buddy, which is easy to flick on and off, comes in. Or maybe someone has small hands or weak hands. 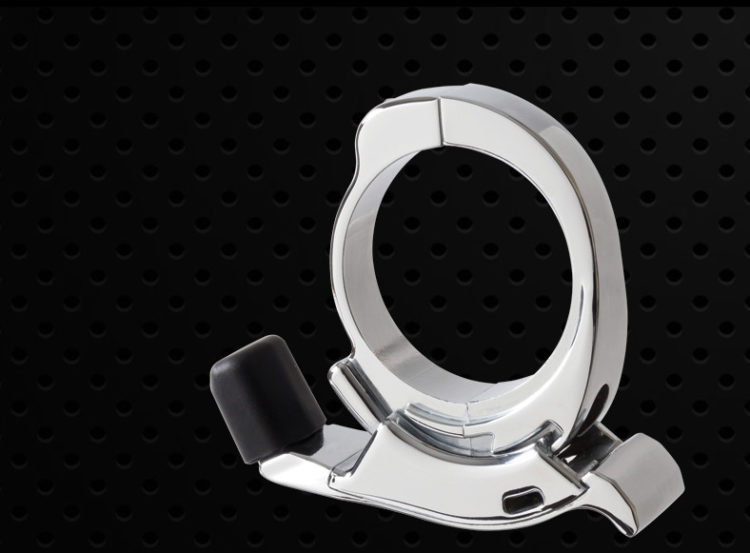 Clutch Buddy before being installed — image courtesy of Clutch Buddy.

There’s an urban myth that some states compel you to keep a vehicle in gear at lights so that it’s “under your control.” I can find no evidence of that. Can you? So as a sales rationale, I’m not buying it.

But the idea is starting to sneak up on me that there may be a lot of folks out there who’ll find the new Clutch Buddy useful. Hell, the way I’m behind the curve on stuff, maybe someday I’ll be one of them.