From the comics, to the small screen, to the big screen, Batman has straddled many different versions of his Batcycle through the years. Sometimes fairly conventional, sometimes mindbogglingly unrealistic, Batman brings out the Batcycle whenever his inner Batrebel needs some “me” time. With a new Batman movie in the works, spy shots have surfaced of what may well be the Caped Crusader’s latest two-wheeled steed, and it is, well, a bit boring. 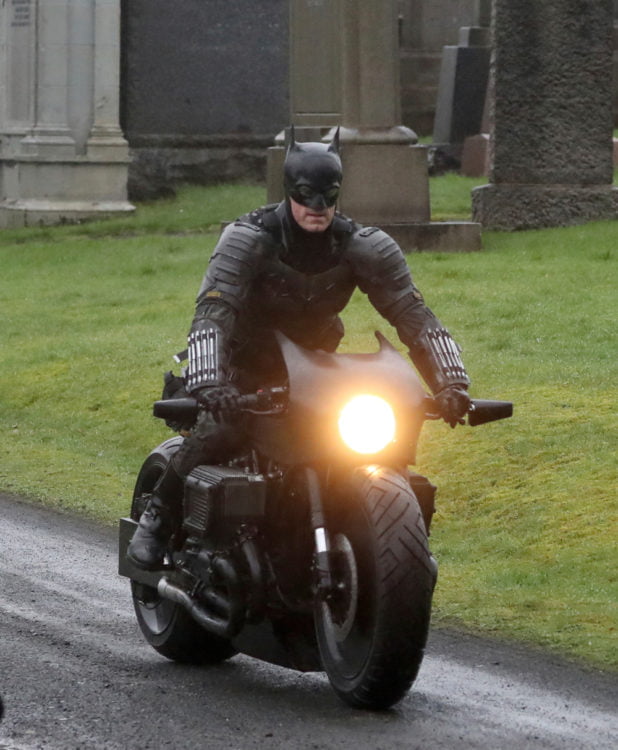 If I have my Batman history correct, and I probably don’t, some of the original TV Batcycles were Yamaha 250s, making getting to the crime scene somewhat of a lazy affair. This contrasts considerably with the Batpod from Christopher Nolan’s Dark Knight trilogy, which looks more like half of a dune buggy than a motorcycle, a result of the fact that the Batpods wheels are actually the front two wheels off of the Tumbler, Batman’s main vehicle of choice in those films.

The latest version of the Batcycle is quite a bit more conventional than the Batpod, but far more beefy than the Yamaha Catalina 250. RideApart.com has pegged the front end as Harley-Davidson FL Softail, but the exhaust note in the accompanying video may or may not be Milwaukee-bred. And, yes, that is Batman’s stunt double laying it down in the wet at the end.

Catwoman: Can you come over?

Catwoman: I stole a diamond

Seeing as Batman’s latest costume looks rather makeshift and pieced together, could this new Batcycle also be nothing more than a conventional motorcycle with a few Bat-cues tacked on? Or is it just a Batratbike that Bruce Wayne cobbled together from old parts for trips to the latest hipster coffee joint?

Only time, and the release of the movie, will tell. Tune in tomorrow, same Bat time, same Bat channel.