The Subcontinent is a whole world in itself; try exploring some of the tourist attractions along with the adventure tracks in the Himalaya

It was a full moon, well after sunset. My friend and traveling companion Charlie (that’s him above) and I were just about to leave the Taj Mahal through the gatehouse when we were stopped by an elderly local. This is quite common in India; people are keen to pass on information to make sure you get the most from your visit. Sometimes it’s for cash or to get you to come to their cousin’s shop, but with the older folk it’s generally just for the pleasure of helping a stranger.

“Come with me,” he said, and led us a little way into the portico. “Now turn around, please, and look.” We did as we were asked and looked at the white marble of the Taj gleaming in the moonlight. “And now step back, slowly. Keep looking.” As the stone of the portico filled more and more of our field of vision and the great whiter building became a little smaller, a miracle happened.

Our newfound friend chuckled. “It is an optical illusion, of course. But is it not wondrous?” 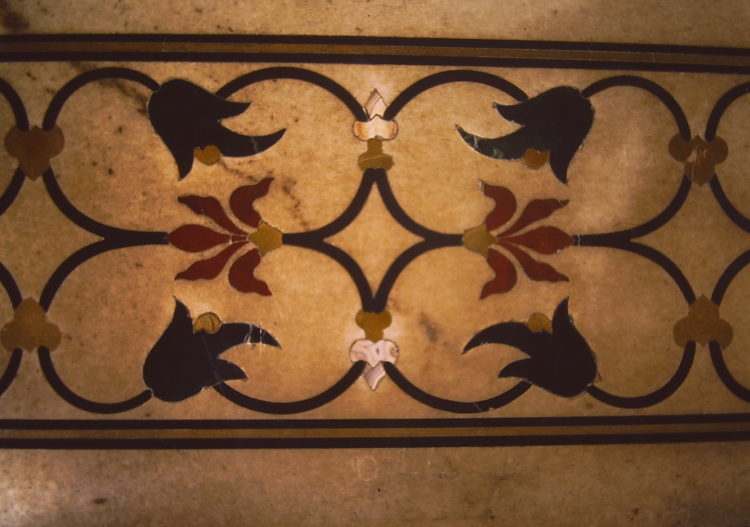 You’ve seen pictures of the outside of the Taj Mahal; here is a detail of the beautiful semi-precious stone insets.

We had to agree. It was wondrous indeed. Our informant refused a tip. “As it happens,” he said, “I am quite well off. But your reactions have added to my spiritual wealth.”

India. Go figure. It’s a land where you can be reduced to incoherent and incandescent fury at one moment when an official of some kind refuses to see any kind of sense: “I cannot change a fifty dollar US note, it is against the regulations.” – “But this is a bank. Why can’t you?“ – “I do not know the relevant exchange rate.” – “You just changed a twenty for my friend!” – “That is correct.”

Give up, walk away, cool down, have a cup of chai. Try somewhere else. 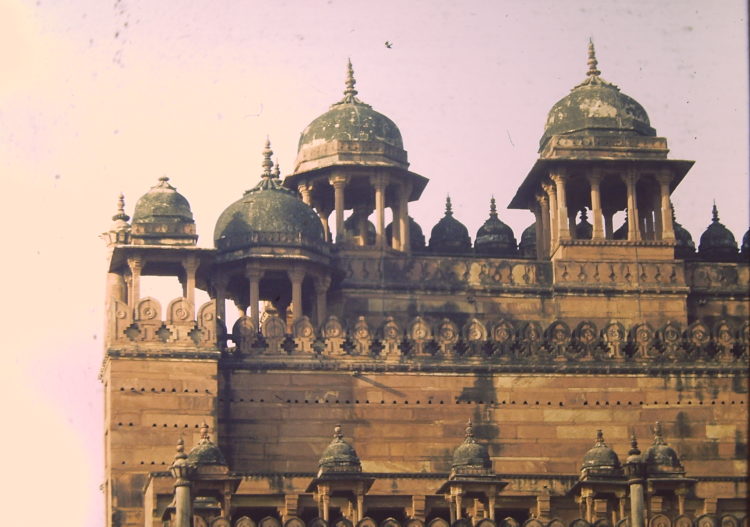 One of many intricate buildings in Fatehpur Sikri: unfortunately the light doesn’t show the colour of the sandstone off to best advantage.

But India is also a land that simply abounds in amazing and wonderful – wondrous, even – places. Take Fatehpur Sikri. This is a not particularly remarkable town near Agra, the site of the Taj, in Uttar Pradesh. It was a lot more important back in the 16th Century; Emperor Akbar founded it as the capital of his Mughal Empire in 1571. The site had been selected for him by a Sufi saint in order to solve a serious problem for the emperor: the lack of a male heir. The saint, Salim Chisti, assured him that he would be granted a son if he moved the capital to this rather remote and unimpressive place. Akbar built palaces and an entire administrative centre there, but it soon became clear that saints are not good at real estate advice.

The water supply was totally inadequate at Fatehpur Sikri, and though the emperor did get his son, Jahangir, the lack of water led him to partly abandon the city after fourteen years. In 1610 it was deserted completely. But the intricate buildings remain, in stunning (and I mean it) red sandstone, and if it weren’t for the aggressive tourist touts this would be one of my favourite sights in India. 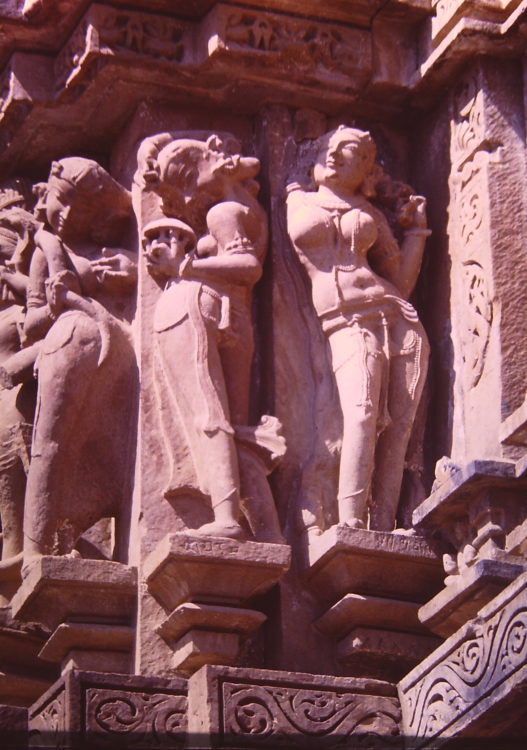 But no matter what your opinion on ancient eroticism is, there is no question that the carvings themselves are masterworks. The stone figures seem to lean out of their wall niches, almost alive with the vigor of the master craftsmen (and perhaps women) who made them. 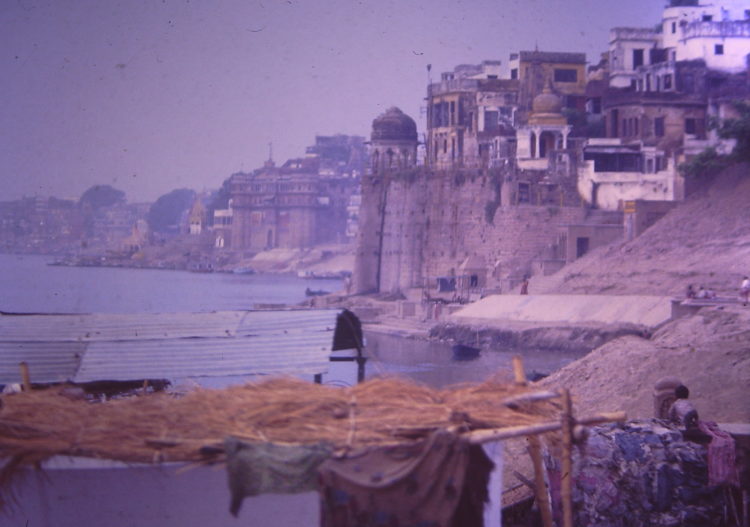 Varanasi towers over the sacred river Ganga. It is one of the most fascinating cities in a fascinating land.

Four hundred kilometres to the east lies Varanasi, perhaps most famous for its stone riverside platforms where bodies are cremated before being consigned to the waters of Mother Ganga, the Ganges River. It has always seemed a little rude to me to intrude on this ceremony, especially with a camera, but Varanasi has many other attractions. The manifold temples are beautiful and, being Hindu are accessible even to non-believers. You’re encouraged to take photos – as long as you then visit the uncle’s silk shop. 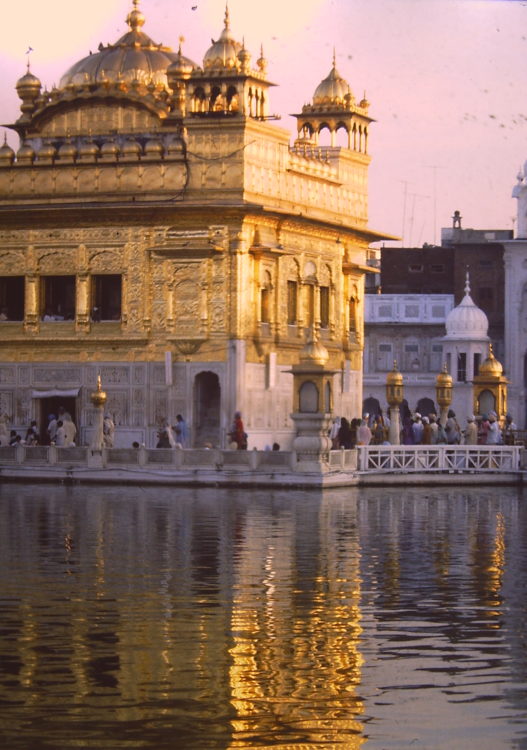 The Golden Temple of the Sikhs in its ceremonial lake holds the Sri Guru Granth Sahib, the holy book that Sikhs consider a living teacher.

In the north-west of the country and on the way up into the Himalaya you’ll find Amritsar, the holy city of the Sikhs. Its centerpiece is the Golden Temple, once again accessible even if you are not a believer. Park your bike outside – the temple guardians will keep a careful eye on it – and queue up for the walkway across the lake to the temple to see the Granth Sahib, the holy book, and to have a snack. Sikh temples pride themselves on feeding all comers.

India is universally known to adventure riders for the wonderful roads, tracks and trails in the Himalaya. But there is more to it.