Editor’s note: Read Part 1 of John’s epic ride from Ulaanbaatar, Mongolia to his home in California, USA here. Part 15 can be read here. 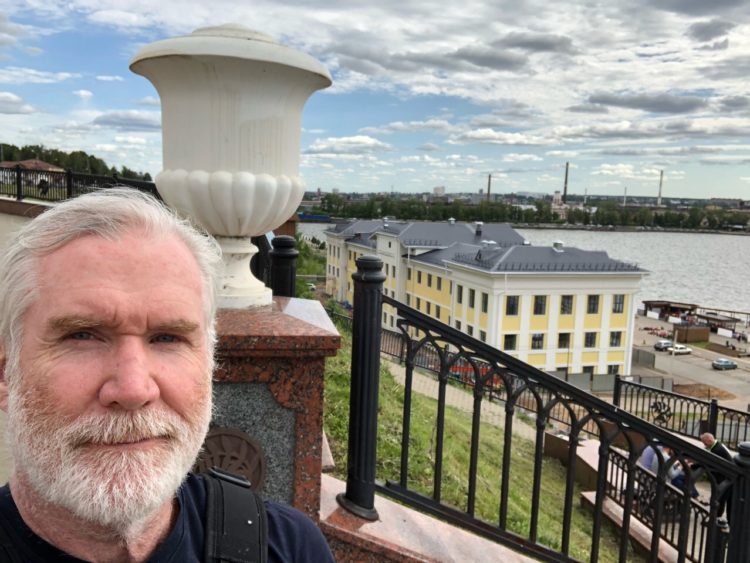 Before this trip I put on 10 pounds and felt really strong. It’s tough to keep the weight on. The riding and moving gear takes its toll. So tonight’s dinner was a large pizza – loaded. Last night was a mess of pasta, sausage, onions, garlic and cashews. I’m trying – but honestly, no energy left for OMNI style workouts. The occasional burst of burpees to failure but that’s about it.

Daily, I use Booking.com to find accommodations. It’s a good service. The first failure was last evening on arrival. Generally, apartments are cheaper and you get more stuff compared to Hotels – so when I see a decent looking apartment priced reasonably, I book. The downside is logistics. With apartments you have to find them and get a key. With hotels you drive up, there is a sign, a clerk, a key, and you crash in the room – Nirvana.

The apartment in Izhevsh was amid a couple acres of post 1950s style high-rises. These buildings are not arranged in a grid – anything but, so for google maps to plot a walking course for the last 100 feet it looks like a hedge maze! I parked in mud quite prominently in front of what looked like the booking.com address and image. I messaged the host – in Russian thanks to Google translate. Nothing – radio silence. So, I got out of my highway gear, packed it away, killing ½ an hour – still nothing. Ok, plan B, find a local. I saw a cool looking young guy walking by, asked him “English?”. He said no but I had a good feeling about this dude – time for google translate. He’s into it! 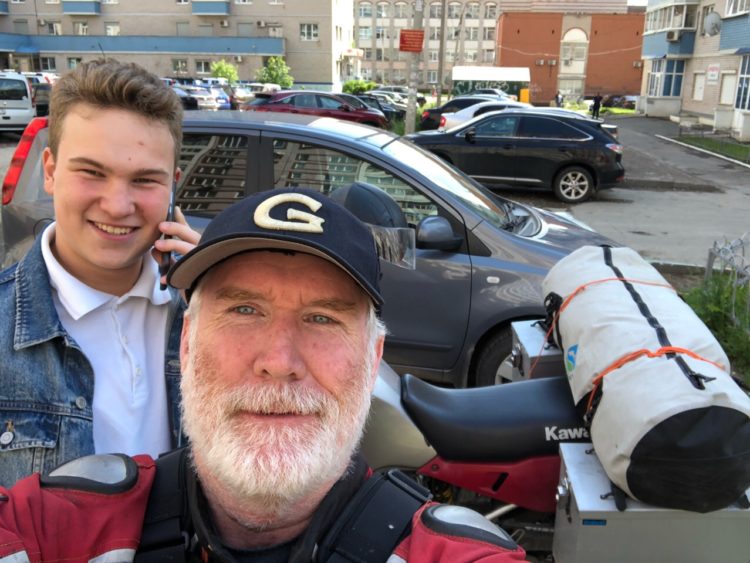 Pretty soon 3 of his university friends are part of the process – each arrived with his own set of English skills. They call the host, after many minutes of talking I can only tell she’s spooked and doesn’t want me in the place. As long as Booking.com gives me a 0$ cancellation – I’m fine. But it gets better. These guys are locals and they say for the 1500 rubles (23USD) they can set me up in a better place. I’m game. Now if you’re thinking – scam, yes it crossed my mind but what the hell, so elaborate, I just can’t imagine it – at least until it happens and I’ll deal with it then. 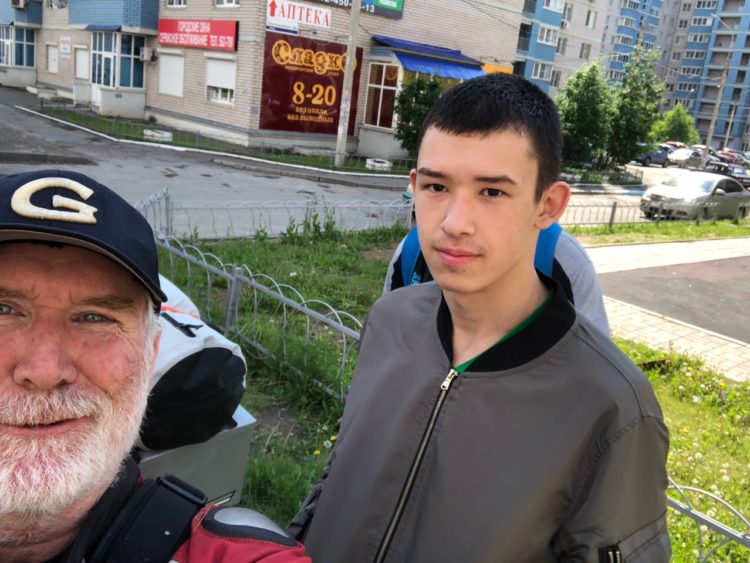 Within ½ an hour I’m hauling my gear up 5 flights of steps (just a fact in Eurasia) to a clean spacious centrally located flat.

Boring stuff, but I felt great, showered, ate well and rested. Bang, 2am, bolt upright, whew, just a nightmare. Can’t sleep, and then it happens, I lose my nerve and start what-iffing. I won’t bore you with all the soul searching (and WhatsApp to Vicki and Marnie). But next morning I resolve to get a good testosterone boosting activity under my belt – The Kalashnikov Museum.

I walk less than a mile toward the museum – directly opposite the iconic gold-domed St. Michael’s Cathedral. My inner shutterbug is a moth drawn to this shiny flame. 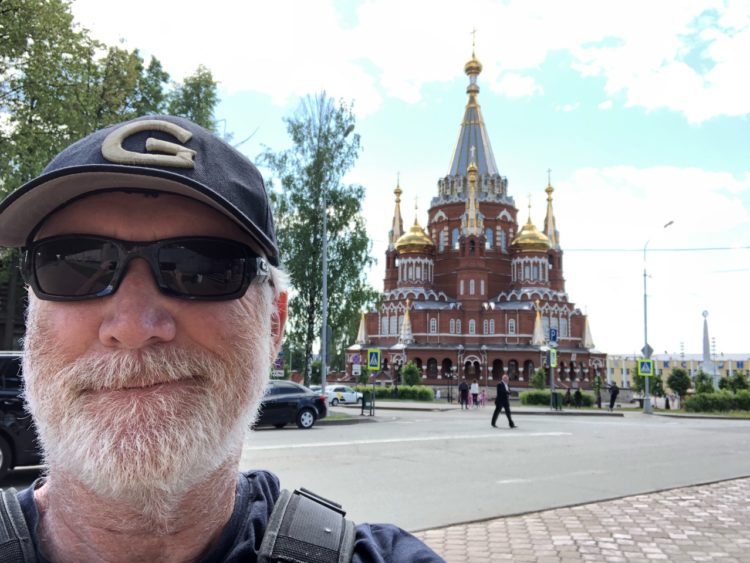 St. Michael’s Cathedral on the Way to the Kalashnikov Museum 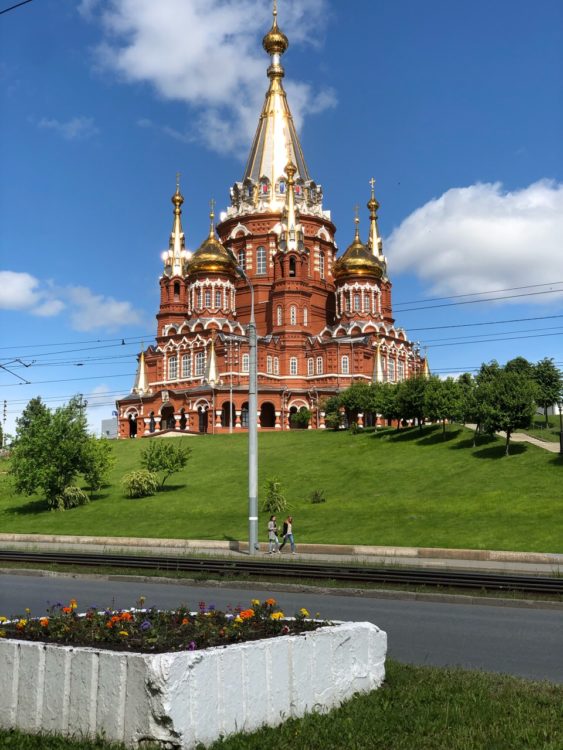 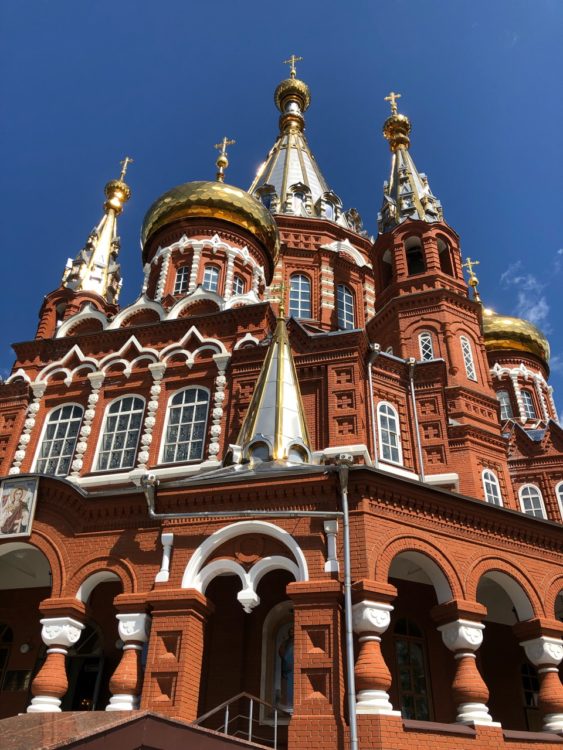 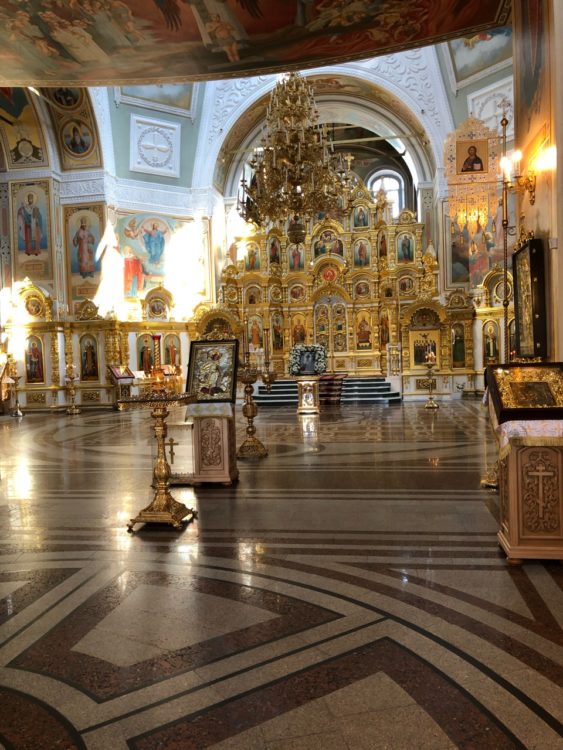 After photographing the Cathedral, as countless before and after me, I enter the Kalashnikov Museum and am prepared to walk alone through the exhibits when a tap on the shoulder reveals a most studied looking Russian woman offering a guided tour for 300 rubles. Her English is impeccable. She was a university professor in linguistics but this job pays better! 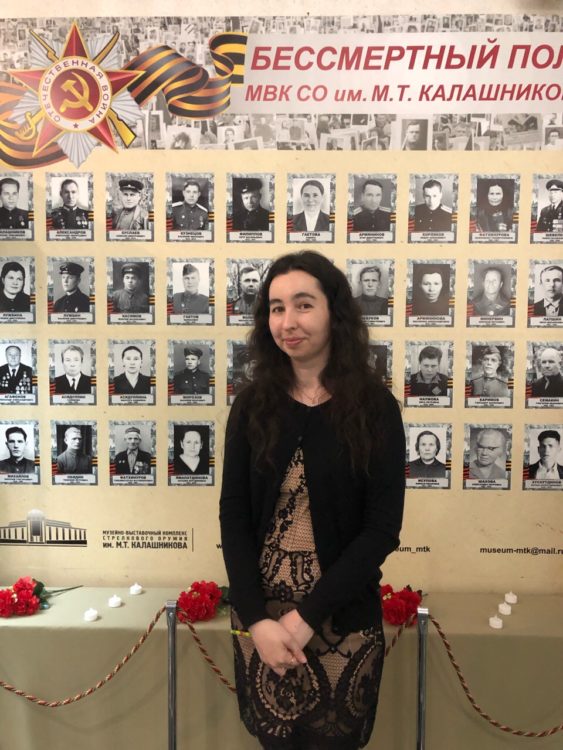 My Museum Guide, weapons expert through knowledge and practice. The people pictured are relatives of museum employees that gave their lives defending Russia

My guide spent 2 hours giving me details of Kalashnikov’s life, successes, failures, inventions and relationships. I could not do justice by trying to recount the many facts and anecdotes but I will tell you 2 things that struck me especially. First, Kalashnikov was a “Classified” person. This meant he could never travel outside the Soviet Union. That life classification was lifted in the 1990’s and he traveled the world including one very special meeting with Eugene Stoner the American designer of what ultimately became the M16. These two men developed a deep and genuine friendship which according to my guide was in no small part due to their similar humble start in life.

The second moment I’ll never forget is when my guide, a woman in her 30’s described being a kid in Russia in the violence of the 1990’s. As a child walking to school she was attacked. Subsequently she carried a weapon. She assured me it’s better today but that part of her character was formed and now she is an avid marksmen, boxer and knife thrower. Impressive, well worth 300 rubles.

As I was about to leave my guide said, “You must shoot”!  Apparently there is a gun range in the basement. The requirement to shoot is a valid Passport and Drivers Licence.  Since I’m only carrying one form of ID I commit to return in the morning and fire an AK47.  Oh yes, and the cost is 325 rubles – the equivalent of 5USD. 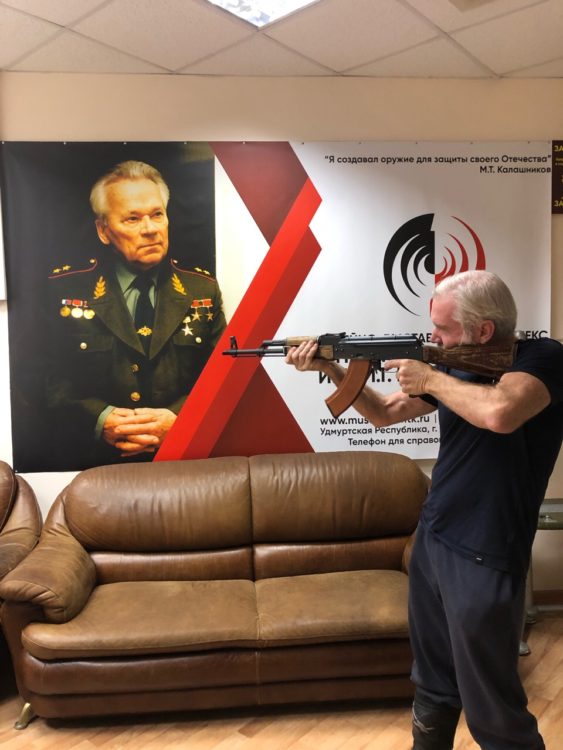 Firing Range in the Basement of the Kalashnikov Museum

And just like that another day has slipped away. I hope you enjoy the pictures. Keep your stick on the ice! 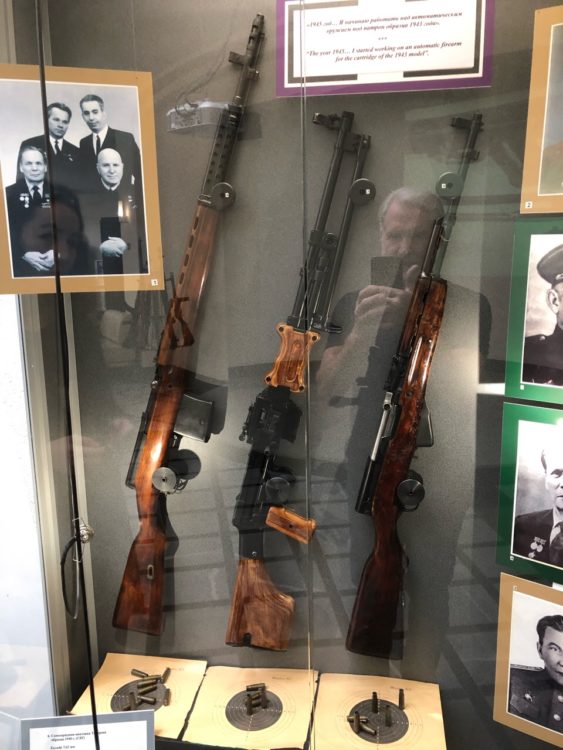 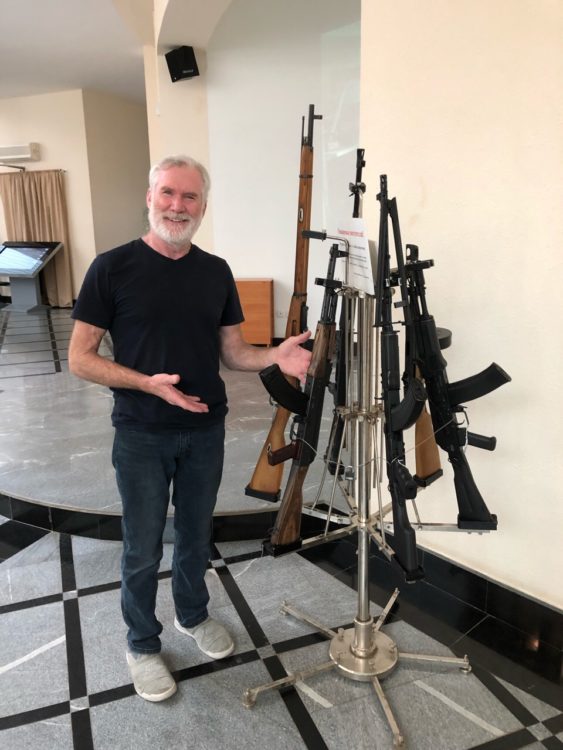 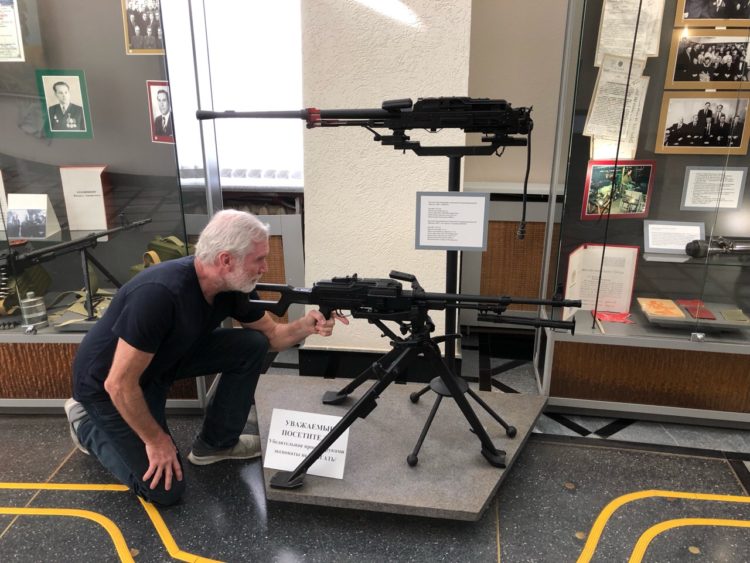 A very Hands On museum 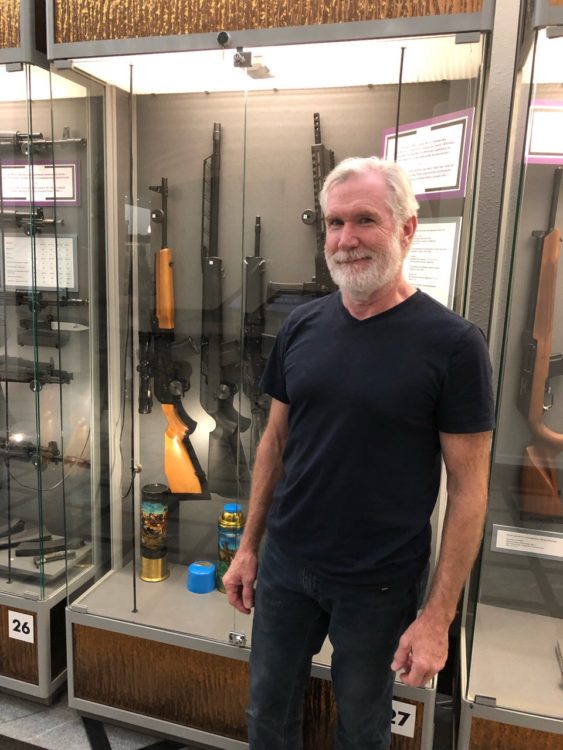 Specialty Rifles. Those in Green are for Elite Border Guards 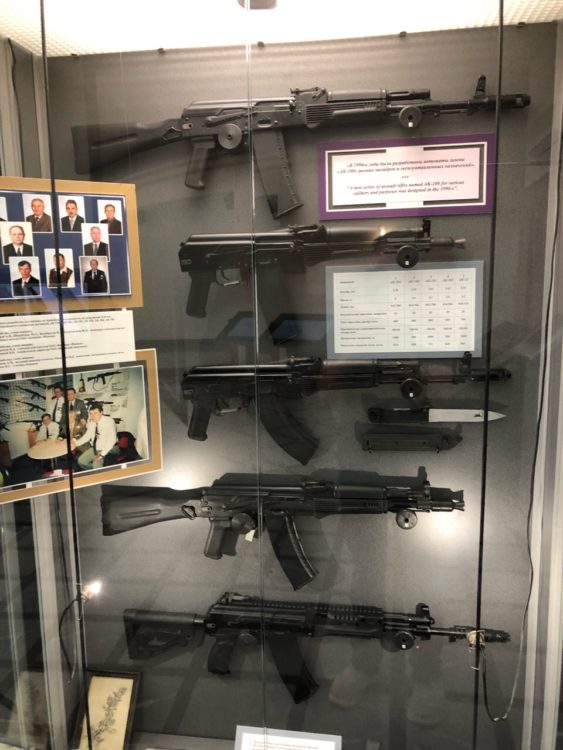 More Variations on the Basic Design 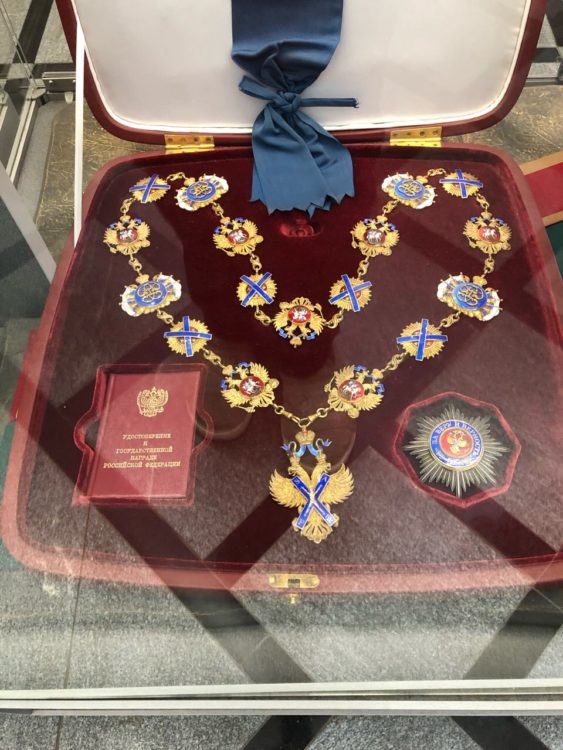 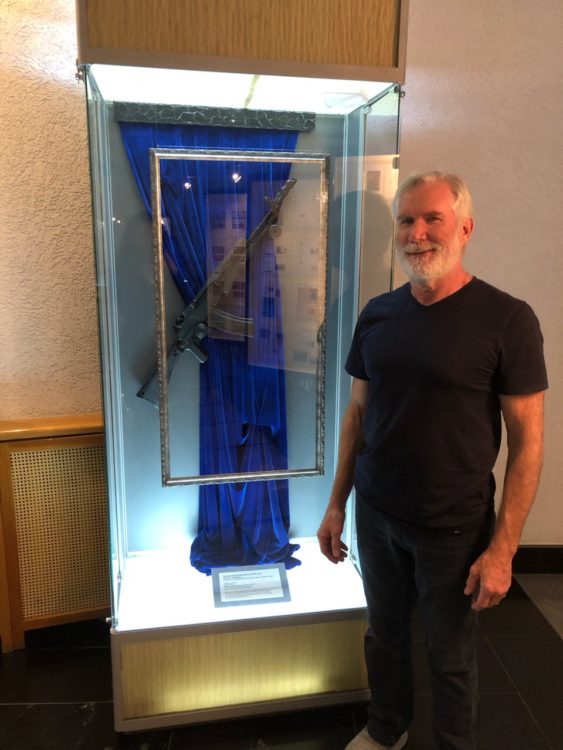