The resurrected Jawa motorcycle brand has a problem.  Both of Jawa’s new models are selling faster than they can be produced.  Bookings for the machines began online and quickly escalated.  Orders came in so fast that Jawa shut down online bookings and only allowed orders to be placed at dealers.  That would seem to be a problem that many moto manufacturers would like to have.  But in this case, it’s not.

The Jawa can’t be produced fast enough to meet demand.

Jawa didn’t anticipate the gargantuan demand for the bike in India.  They didn’t envision that demand would outstrip its production capabilities.  But it has.  They say they have ramped up production but are still unable to meet demand.

Delays are 10 months in some India cities.  This is not sitting well with customers.  In an attempt to placate their customers, Jawa has decided to that if it can’t deliver the ordered bikes, it could at least give customers visibility into when their motorcycle will be delivered. 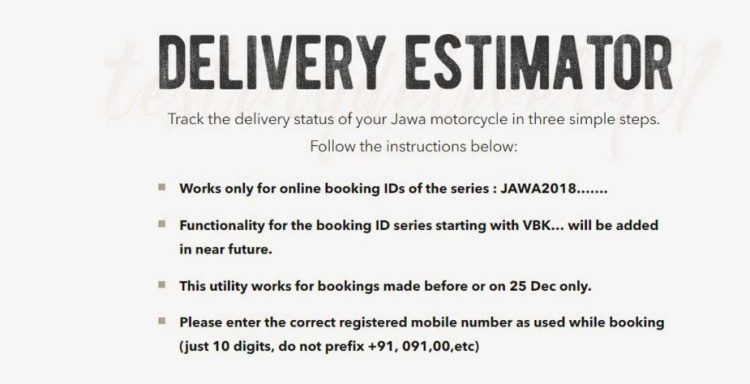 A screenshot of the delivery estimator.

Jawa’s solution is to provide a web-based delivery estimator.  The website is supposed to allow customers to track where their motorcycle is through every production step.  But there are a few catches.

Jawa has a “good” problem for now.  But if it can’t deliver the promised bikes, that good problem can quickly turn into a bad one.