There’s blood in the water in Milwaukee. As ex-president and CEO Matt Levatich disappears beneath the wine-red waves, mortally wounded by the Great White Shark of the stock market, the Motor Company is looking for a bigger boat. In fact, they may already have found it in Levatich’s so-far ‘acting’ replacement, Jochen Zeitz.

My first encounter with Matt Levatich was at a press conference at the then-H-D owned MV Agusta factory in Varese, northern Italy. Levatich, who was The Man From Milwaukee, shared the podium with the legendary, not necessarily in a good way, Giovanni Castiglioni and the body language was astounding. The two men faced noticeably away from each other and each refused to acknowledge the other. Castiglioni interrupted and contradicted Levatich, who bore the, in my opinion, boorish behavior, without acknowledging it. Castiglioni would later buy MV Agusta back from H-D.

I formed a high opinion of Matt Levatich, and although even he couldn’t effectively manage the local legend on his home turf, he clearly gave it the ol’ team try. Speaking to him recently when he visited Australia, I saw no reason to change that opinion. In the speech he gave at the press conference, he struck just the right note by asking the attending journalists to encourage people, especially young people, to consider motorcycling by making more of its fun, recreational elements than the decline of the industry.

Levatich had been president and CEO since May 2015 and was president and COO before that. He had paid his dues, and the Board clearly felt that he was on the right track with ‘More Roads to Harley-Davidson’. Unfortunately, the stock market disagreed.

With Harley’s bike sales in the USA last year being the lowest in 16 years, Levatich was fighting an uphill battle with changing demographics and young riders demanding bikes that are very different from H-D’s traditional large cruisers and touring motorcycles.

Harley-Davidson share price has nearly halved during Levatich’s tenure, but that was not entirely on his plate. The Motor Company had been ignoring the growing trends in the motorcycle industry for decades. In fact, it was Levatich’s outreach to younger riders, the creation of non-cruiser motorcycle offerings, and the introduction of a full-sized electric motorcycle that seemed to be pointing to a successful future. But falling sales figures, and a similarly fated balance sheet, have raised concerns amongst investors, and that is always a terminal blow for CEOs at publicly traded companies. 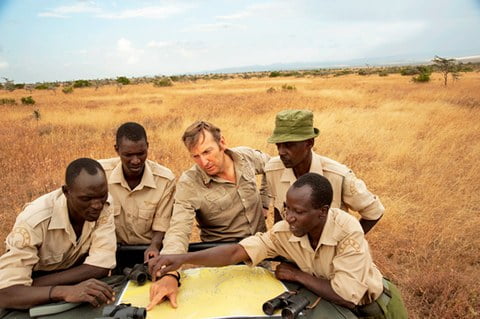 Jochen Zeitz owns a luxury retreat in Kenya and is involved in charitable activities there.

“The Board and Matt mutually agreed that now is the time for new leadership at Harley-Davidson,” said Harley-Davidson board member Jochen Zeitz in HD’s press release. “Matt was instrumental in defining the More Roads to Harley-Davidson accelerated plan for growth, and we will look to new leadership to recharge our business.” The implication is clear – Levatich was yesterday’s man.

Zeitz will take on the title of acting president and CEO, while Harley-Davidson begins a talent search for a permanent posting. According to Wired.co.uk, who late last year published a lengthy article about him and his work with H-D, he used to be known as the  ‘Sustainability Taliban’, an apparent reference to his devotion to the sustainability cause. (An aside: The article’s timing is interesting).

When Zeitz was encouraging Levatich to think about sustainability, for example, he focused not just on the moral justification for electric engines, but on the needs of Harley-Davidson customers to have healthy natural landscapes in which to ride. Levatich remembers talking about “what every rider loves about the ride – it’s the environment they’re riding in, isn’t it? After that, it was easy to get brand alignment, and then you’re right into using that argument to support [sustainability] as part of the brand.” Eventually, Harley-Davidson devised a new mission, turning the brand’s historic celebration of freedom into a desire “to preserve and renew the freedom to ride”.

Zeitz has an incredible track record. Now in his mid-50s, he became the CEO of Puma in 1994 at the age of 30. The brand went from near bankruptcy to one of the world’s largest sporting brands.  More recently he co-founded a charitable foundation with Richard Branson to promote sustainable business practices and written a book with a Benedictine monk: ‘The Manager and the Monk: A Discourse on Prayer, Profit and Principles”. Could he bring the same success to H-D?

I don’t know if I’m the only one, but I see a future for H-D under Jochen Zeitz.

We will hear more of Jochen Zeitz. I’d love to have a chance to talk to him. As far as I’m concerned, the Motor Company has already found its new leader, one who will no doubt reassure shareholders with his attitude. Let’s hope he can redefine Harley-Davidson, and do more than tread water in the bloodied waves of Lake Michigan.

(Sources: The Financial Times, Wired.co.uk and other web publications)