The Kawasaki KLX300R has returned, with a few improvements over the previous machine.

While the KLX300R was long a part of Kawasaki’s trailbike lineup, it was canceled a few years ago, leaving a hole. This week, Kawasaki announced it’s brought the trailbike back to the lineup with EFI and electric start. There’s a new steel frame as well, and the aluminum swingarm is updated, too. The 21-inch front wheel and 18-inch rear wheel are also new, with Dunlop MX52 tires.

The inverted front fork and rear shock are also new, but provide the same 11.2 inches of travel as before. Seat height is 36.4 inches, and there’s 12 inches of ground clearance.

The engine is basically the same as the previous model, a 292 cc thumper with liquid cooling and DOHC top end, and six-speed gearbox.

The EFI and easy starting will no doubt please the bike’s target market, but the added weight will be a problem for some buyers. The KLX300R has gone from a relatively manageable 255 lbs to 282 lb. The KLX also lost its headlight and taillight, which might keep weight and MSRP lower, but will frustrate trail riders who require them—some jurisdictions mandate headlights and taillights for public trail usage. 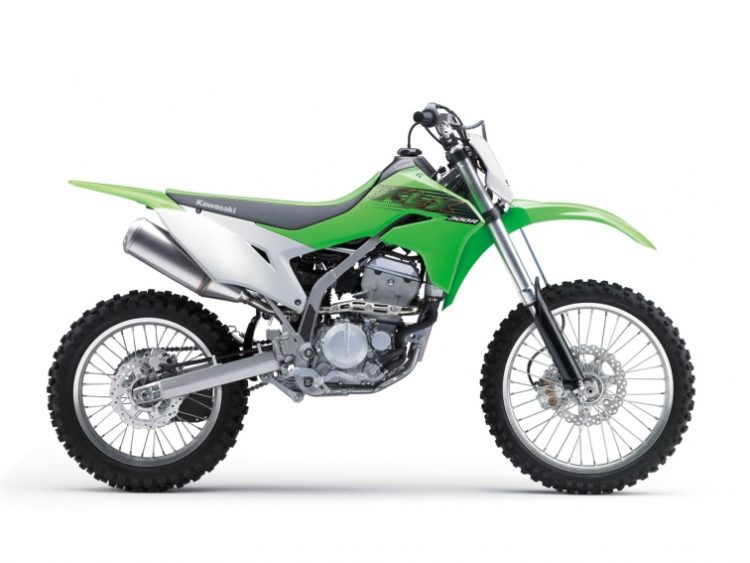 Wot, no headlight? And no taillight? Some riders will be unhappy with Kawasaki’s deletion of the light kit. Photo: Kawasaki

Despite those drawbacks, the KLX300R’s reintroduction is good news for dirt riders who want a competent playbike, without the aggression of an MX machine but with more power and suspension than a wimpy beginner’s machine. It’s also possibly good news for dual sport riders, as the KLX300R’s top end may possibly bolt onto a fuel-injected KLX250 engine. We’re sure someone is already trying to figure out if this will work, giving people a way to hop up their quarter-litre Kawi dual sport with OEM parts.