What’s the best bang-for-your-buck bike on the used market? It depends on what you’re looking for, where you live, and how hard the machine was used, but these days it’s hard to beat the Kawasaki Concours. The old ZG1000 (aka the GTR1000 in Europe) is almost criminally undervalued these days. Bikes like this ’06 model go for well under $3,000, with years of continent-crossing left in them. For some reason, most people aren’t interested. Here’s a look at what they’re missing!

In the beginning was the Ninja …

The Kawasaki Concours, also known as the GTR1000 in Europe and the ZG1000 in North America, is a sport tourer based on Kawasaki’s mid-’80s Ninja 1000. The Concours uses the same basic liquid-cooled four-cylinder 16-valve DOHC engine. Like the Ninja, the Concours has a six-speed gearbox, and hydraulic clutch. Overall, it’s a very reliable engine, except for the first year of production. Some owners will tell you the 1986 Concours head is too soft, and will eventually eat the valves. I don’t think this is just Internet myth, because I have seen bikes for sale with this problem.

Kawasaki did some minor tinkering  with the intake (smaller 34mm carburetors, instead of the Ninja’s 36mm carbs) and top end (milder cams). The result? The ZG1000 made around 110 horsepower in North American tuning, while the Ninja 1000R made about 125 horsepower. The difference would have been even greater at the rear wheel, as Kawi ditched the Ninja’s chain drive, and gave the Concours a shaft drive. That means more horsepower loss, but it also meant the bike was much better-suited for touring.

In a touring bike, torque is almost as important as horsepower; with 70ish pound-feet of torque, the Concours had no problem hauling a load of luggage and a passenger. 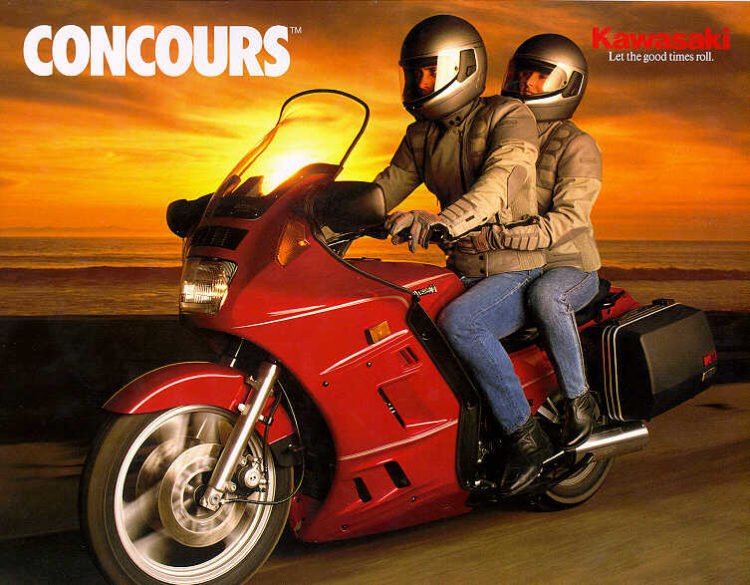 The original Concours advertising. ATGATT wasn’t as big a deal back then. Photo: ZGGTR.org

When Kawasaki brought out the Concours, the moto-world looked considerably different. Nobody else was really building sportbike-based tourers. If you wanted to go sport touring, you used a sportbike (which is why the earliest crotch rockets were still very sensible roadgoing machines, like the original Honda Hurricane). There were sporty-ish touring bikes, but when most people wanted to put down long miles, they either bought a BMW K bike, or they bought one of the Japanese land barges, like the Honda Gold Wing, or the Suzuki Cavalcade, or Yamaha Venture. The Concours hit a sweet spot; it was sporty, like the K bikes, but it still had lots of sensible, wind-busting bodywork.

Taking a closer look at that bodywork—there’s a big fairing, and the windscreen is pretty large, but it does all have a mid-’80s sportbike look. But, the standard-equipment sidecases are a different story. They look like something Samsonite might have made, a no-nonsense suitcase for the value-minded business traveler. They have an even stronger resemblance to the Krauser sidecases you’d see on old Beemer tourers, and that’s probably no mistake. Kawi wanted to steal customers away from BMW in the 1980s. Over the years, to keep the bike’s price low, Kawasaki never really updated the look. Twenty years later, the fairing and luggage looked basically the same as the original model, usually in no-nonsense blue or red paint. 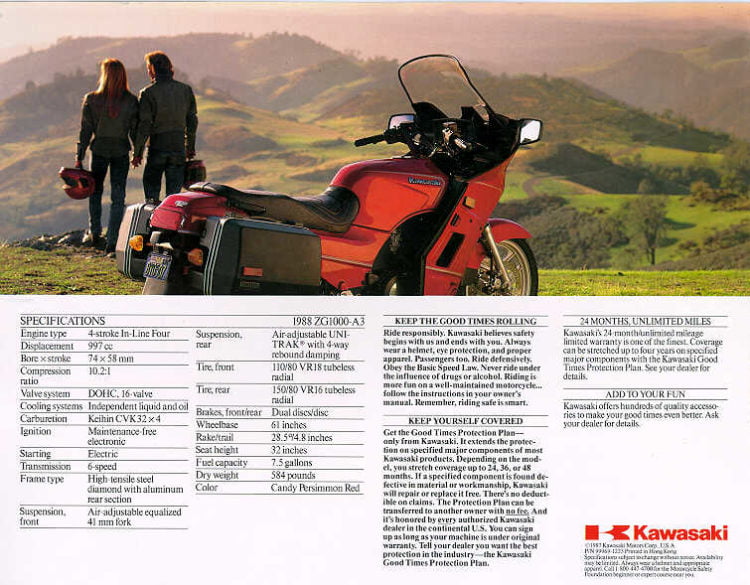 The specs for the original ’80s model. The ’94 update didn’t change much. Photo: ZGGTR.org

Aside from the problematic ’86 models, the Concours engine is generally considered to be stone-reliable, able to power the bike to speeds over 120 mph. What about the rest of the bike? How about that 7.5-gallon fuel tank? If you want to make long, long miles between stops, the Concours can do it. It’s a comfortable all-day ride, thanks to the excellent fairing and windscreen coverage and a decent seat. Because it’s an ’80s design, the Concours has an oddball 18-inch front wheel and 16-inch rear wheel, certainly not something you’d find on a modern sportbike, but it still goes around corners just fine. The brakes aren’t super high-spec, but the 300mm rotors and two-piston calipers get the job done. Same for the front forks and rear shock—they’re adjustable for preload and rebound, so if you need to do some tweaking, you can.

While modern four-cylinder engines would typically have shim-and-bucket valve adjustments, the Concours came with screw-type adjusters. That means you’ll probably have to adjust them more regularly, but it’s much easier to make the adjustment yourself, with no futzing around with shim kits.

The Concours doesn’t Gold Wing-esque opulence (you don’t see many outfitted with stereos and CB radios). However, the second-generation models (Kawi slightly overhauled the line in 1994) had little lockable compartments in the fairing for gloves, sunglasses, etc., and tripmeter and fuel gauge came as standard. Along with the sidecases, Kawasaki also built in a tail rack as standard. The Concours had everything you needed, and nothing you didn’t. Overall, despite Kawasaki’s reputation for building slightly silly, too-fast bikes, this was a sensible motorcycle. Maybe a bit too sensible, even—you’d think this bike would be perfect for the long-distance nutters riding the Iron Butt Rally. But, for some reason, the Concours was never as well-represented there as you’d expect, with far more Gold Wings and BMWs showing up. 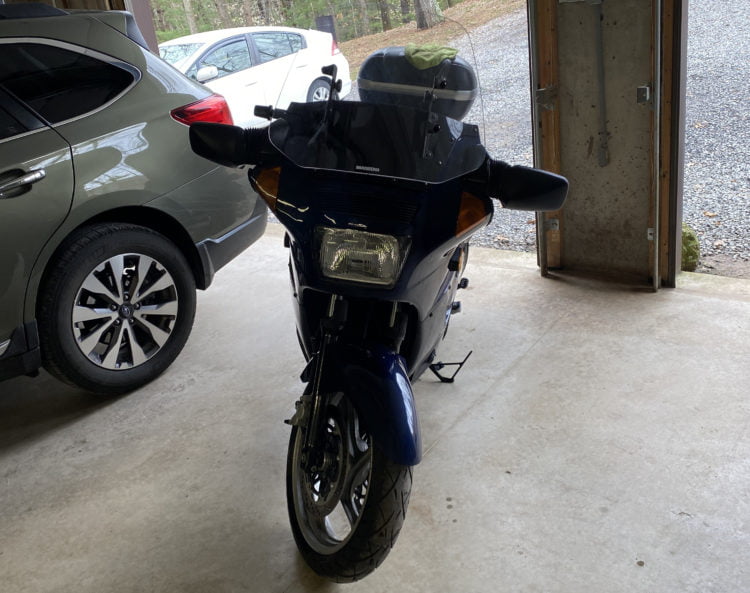 What Are The Downsides?

The Concours is heavy, around 650 pounds fully-fueled. The huge gas tank gave the bike a high center of gravity that some riders don’t like. The 31-inch seat height doesn’t help, either. As well, the Concours never came with ABS. If you plan to ride long miles in crappy weather, antilock brakes are never a bad idea.

The other problem is that Kawasaki stopped making the 1000cc Concours in 2006. Since then, it’s built the Concours 14; an original Concours is at least 14 years old now. Thankfully, keeping older bikes on the road is much easier than it used to be, thanks to eBay and other online retail sites. As well, the Internet has made it easier to connect with other riders with the same machine. The Concours has an excellent owner’s resource, COG-Online.org, where you can find DIY repair info, spare parts and other help. There’s also ZGGTR.org, for help and info.

What About This Bike?

This 2006 Concours comes from the last year of production, before Kawi turned over to the 1400 model. The seller says the odometer reads a crazy-low 26,000 miles. If that’s accurate, and the bike is currently in good mechanical condition, it might have another 50,000 miles left in it—and the seller’s only asking $2,500. Sure, the seat has a busted seam, but that’s a quick fix for an upholstery shop, or you can buy an Airhawk to cover it. The ad says this is a “great-running bike,” with Givi trunk and adjustable windshield. If you’re looking for an affordable machine to hammer out some miles, this looks like it could still do the trick, 14 years after it left the showroom floor.