After riding, I think this is the answer: Kawasaki wanted to build a better beginner bike. And, I think Team Green succeeded. 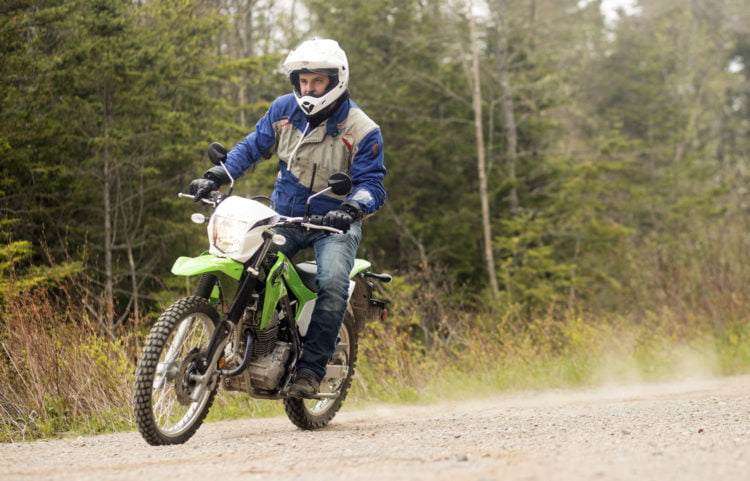 As you can see, the bike looks a bit small with a 6-foot-tall goon rider on board. Photo: Laura Deschenes

Looking at the spec sheet, it’s obvious the KLX230 isn’t aimed at speed junkies, at least not in developed markets. Kawasaki says the air-cooled SOHC single-cylinder engine (with two-valve head) makes 19 horsepower at 7,600 rpm, and 15 lb-ft of torque at 6,100 rpm. That’s more power than the old Honda CRF230L, but roughly the same as the sadly-departed Yamaha XT225. Compare it to the liquid-cooled KLX250 or Honda CRF250L, and it’s down 3-5 horsepower, depending which generation you’re talking about. At least the KLX has a proper six-speed gearbox, and EFI.

There’s a set of old-school, non-adjustable telescopic forks up front (220mm of travel), and monoshock in rear (223mm of travel). The KLX has a proper 21-inch front wheel, and 18-inch rear. The frame is sensible, budget-friendly steel. Curb weight is 133 kg, not too heavy, but also not too light when you realize the KLX has a tiny 9-litre fuel tank. There’s a 265-mm brake disc up front, with two-piston caliper, and single-piston caliper mated to a 165 mm disc in rear.

ABS is an optional add-on; it’s not expensive, but pricing depends on your market.

The KLX230 has old-fashioned incandescent lighting, and an LED dash. All in all, it’s a budget-friendly package, with ABS really the only feature that will make you do a double-take. 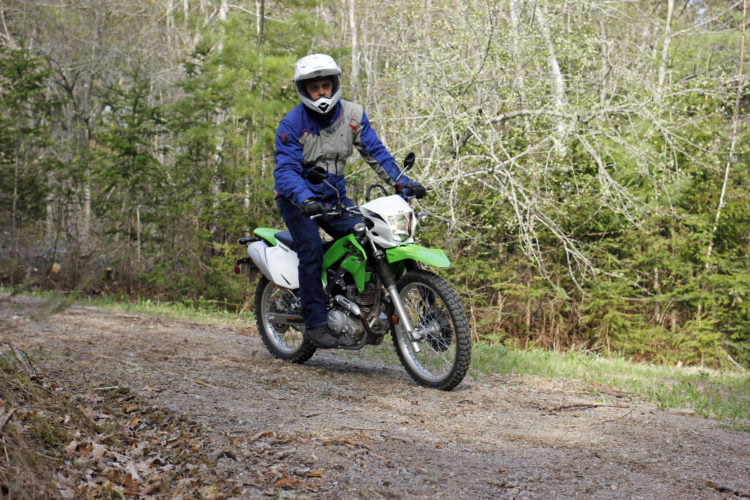 More of a gravel lane bike than a true off-roader, but if you want to bash it through muck, you can. Photo: Ramona Rodden

To me, at least, the KLX looks non-intimidating in person. That square headlight is a tad bulbous, but aside from that, the styling isn’t bad. My test bike was lime-green, the supposed colour of speed, and I thought the plastics all fit well and looked good. The frame welds looked a little rough; that’s unsurprising, as this machine is built in Indonesia at a Kawasaki Heavy Industries factory. No doubt that facility has less emphasis on presentation than Kawasaki’s ZX10-building Japanese factories.

One important question for dual sport bikes is, how crashable is it? The KLX230 comes with no handguards and no skidplate. Much as I hate the shoddy plastic guards the Japanese OEMs generally include with these bikes, I think it’s a mistake to take a step back, and include none at all. Even the skimpy plastic hand guards will protect your knuckles from trailside branches, and the flimsy skid plates will provide minimal protection. But in today’s world of shrinking budgets, excluding these items allows Kawasaki to keep the price low, and no doubt drives sales of factory accessories, so Team Green will see that as a win-win. Really, a smart owner would install proper metal guards anyway.

Aside from the lack of guards, and the low-slung header, the KLX230 actually looks like it would survive a lot of abuse. The gas tank is tiny, but it’s tucked in between the frame rails, where it’s unlikely to be damaged. The turn signals are reasonable flexible, so they won’t rip off on the first trailside brush encounter. Overall, this machine looks like a good bike for someone who’s just starting out, and might have the odd tip-over. 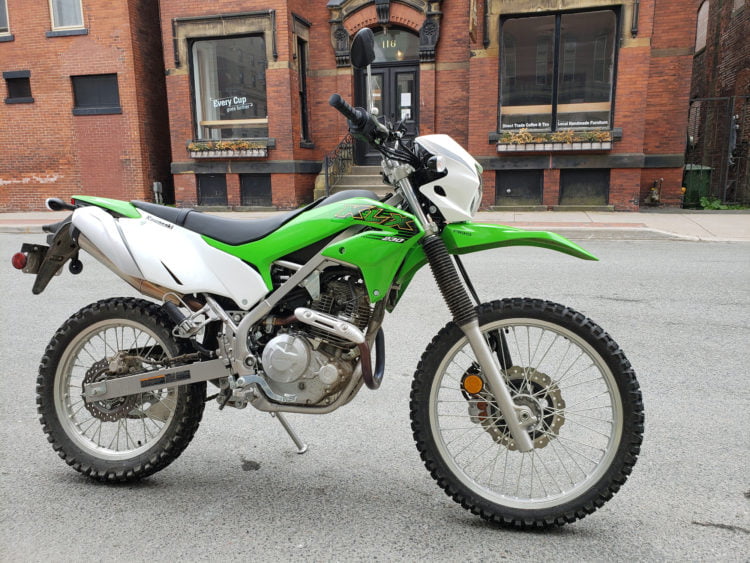 The KLX230 is a decent around-town machine. Photo: Zac Kurylyk

On Street and Trail

On the street and offroad, the KLX proved to be exactly what it looks like: an easy-to-ride, rugged dual sport.

You’ll find the engine perfectly adequate for city riding, although if you live in a megalopolis, you might steer clear of the very fastest roads inside your town limits. At just under 100 kg, I could hold 100 km/h on level ground, but it was hard to get much more. I hit an indicated 120 km/h on the highway, but I wouldn’t want to hold it there for long periods of time.

This machine is really happiest at 90 km/h and below, which more than enough for sensible (and even non-sensible!) riding around town. Honestly, it’s kind of fun banging through the gears block-to-block. The same goes for back roads through the country side. As long as you’re in no hurry, the KLX will get you there, and you’re going to have to work a little harder to keep your speed up. Watch your shifting, keep up your corner speed, and this bike is fun.

Riding the machine, I was very much reminded of a event I once organized, with a former boss of mine. The Dawn 2 Dusk Rally was initially aimed at bikes 250cc or smaller, riding 500 km of back roads in a day. Over the day’s ride, you’d try everything to maximize your bike’s efficiency: stretch yourself over the tank, Rollie Free-style, play around with different cornering strategies, try different shifting techniques, anything to go just a little bit faster. Approach the KLX with that mindset, and even an experienced rider will have fun.

Once you get to the highway, the fun’s over. This machine would be taxed on a hilly, fast secondary highway. On the four-laner, you’re going to be stuck in the slow lane, with the depressing sight of a declining speedo on long grades. 100 km/h, 99, 95, 91, and so on. You can still ride on those multi-lane highways, you just have to be more observant to make sure you’re not cleaned from behind, and to make sure you leave earlier so you still arrive on time.

Offroad, this machine will have plenty of power for its target market. Jaded throttle junkies will whine about how their 1987 Honda 250 was way faster—but that old RFCV engine is behind the shed, with a cracked head, and the KLX is sold here and now.

I’d guess that riders aiming at more offroad action would probably do a sprocket swap at some point, but the wide-range gearbox served me OK for dual sport duty, anyway. Lower gearing would certainly make wheelies easier, but if you can master it with the stock sprockets, you’ll probably be able to wheelie anything else you please. 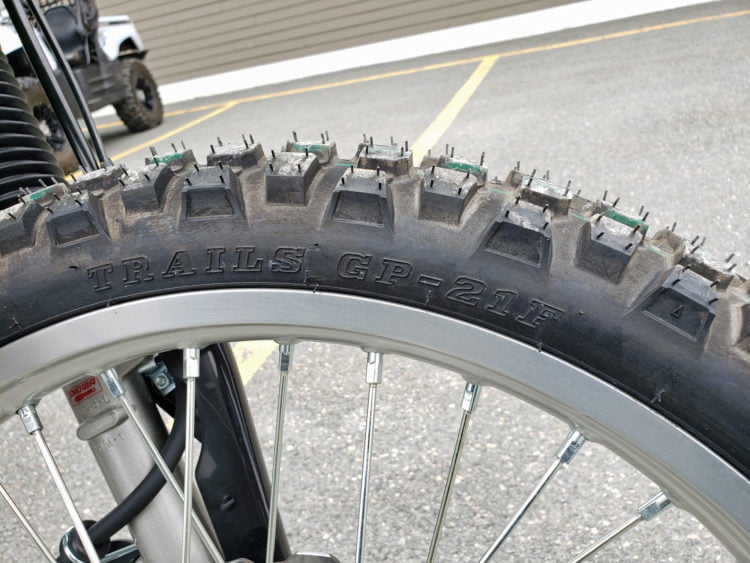 The stock tires aren’t very aggressive, but suit the dual-purpose role nicely. Note the Showa sticker on the forks, behind. Photo: Zac Kurylyk

The engine is adequate, then—what about the suspension? I’m far bigger than the rider this bike was designed for, but I never bottomed the bike out off-road. Anyone who stays on the seat while riding this bike offroad will take a serious beating. Stand up on the pegs, and the bike still chucks you around, but the shock actually has decent hookup. At least, it worked for me—the combined variables of rider weight, skill and suspension capability mean this is an inexact science, especially with a gumby like myself behind the bars.

On the street, it was the same: the rear end stayed fairly planted, even if it did beat you up a bit. I wasn’t a big fan of the bike’s front suspension, though, as I felt it deflected too much offroad, and had a tendency to easily go off-track on the street, too. Again, this could be because I’m considerably larger than the average rider this machine is aimed at. Either way, if you’re realistic and accept that this bike isn’t a razor-sharp Euro supermoto or enduro, you’ll be fine. Ride within your limits, and the bike’s limits.

The disc brakes themselves are unremarkable, and get the job done. It’s the ABS that most riders will be curious about. Outside of pulling fuses or cutting wires, I couldn’t find any way to turn the ABS off. Is that really a good idea, on a bike that’s aimed at trail work?

The traditional complaint against ABS offroad has been, you don’t want your brakes to suddenly cut out when your wheels start sliding. Experienced offroaders know how to use locked-up rear wheels to their advantage, and they think ABS removes that option. Personally, I think they’re right, and if this bike was only aimed at experienced offroaders, I’m not so sure I’d want it. However, it’s aimed at noobs, and at street use, too, where ABS is always a good idea. Surprisingly, I also found it effective offroad.

Kawasaki says it’s tuned the ABS system with careful cooperation with electronics supplier Bosch, and from my testing, I’d say they nailed it. A non-ABS bike allows more hoonery, but the KLX does allow you to lock up the rear wheel, just a little bit. Under normal riding, there were no situations where I thought a non-ABS machine would have performed better. Considering this machine’s aim, at entry-level riders, I think the ABS system has been well-sorted, and I’d definitely pay the minimal extra money for it.

I’m actually very interested to see if this machine is part of a changing attitude towards ABS systems on offroad bikes; we’re starting to see antilock brakes on dual sports, something unthinkable 20 years ago. Even the new Honda CT125 will come with ABS as standard. This is partly due to EU legislation, and partly because ABS has come a long way. While riding the KTM 790 Adventure last year, racer/test jockey Quinn Cody told us he never switches off the offroad-friendly ABS system on his 790. If ABS works for him, chances are it will work for most other riders as well. 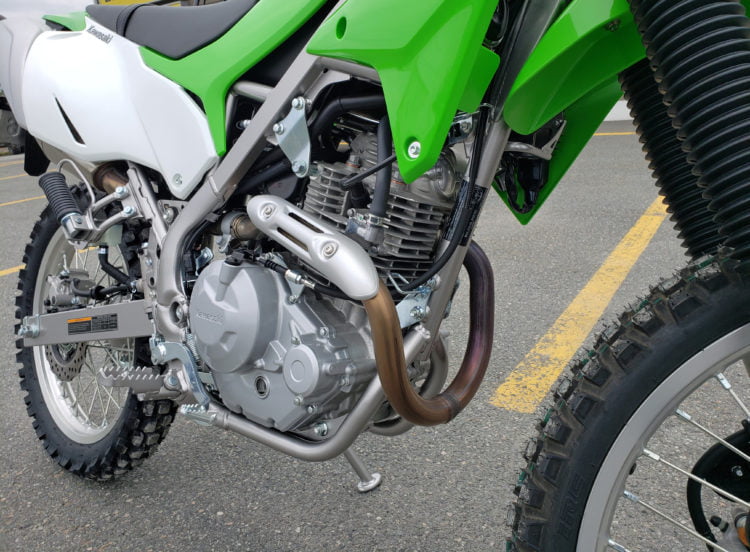 That header looks to be a bit low-slung, but never caused me any trouble. Photo: Zac Kurylyk

I had no issues with the stock seat, although I guarantee you other riders will, because that’s always the case. I found the 9-litre tank usually got me around 110 km before needing a fill-up; the “Low Fuel” gauge seems to start blinking a tad early, but I never ran out of gas. I never put more than about 7 litres of fuel in it. Fuel economy always varies greatly from rider to rider, but I think you’d have to really work hard to drop below 55 mpg, and a sensible rider could achieve far, far better.

The KLX230 is an easy to buy, easy to start (EFI, no kickstarter) and easy to ride. Opt for ABS, and it’s also very easy to stop. Its bare-bones engine and suspension might not impress experienced riders looking for adrenaline thrills, but for beginners, or people wanting a sensible bike for the cottage, the KLX will do the job well. It might not be a full-sized adventure bike, but it is a bike that will open the doors to many adventures.