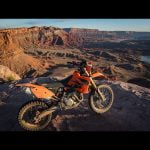 Nothing is more fun than speculating what the next hot bike is going to be, especially if it is replacing something legendary like the KLR650.

Some Photoshopped images have been floating around the internet of the rumored KLX700. Let’s take a closer look.

No other bike has built such a profound reputation as the KLR650. Perfect in every way possible – lightweight, massive amounts of power, an Exxon Valdez sized fuel tank, and suspension that is equally at home on a motocross track as it is a 2-track through the jungle.

Reliability is beyond question. Nothing has ever failed on a KLR650. Ever. Since it started production in 1987, Kawasaki has not sold any replacement parts except filters and brake pads.

As a result of this engineering perfection, Kawasaki has been able to leave the KLR650 in production for 31 years without a single change ever needed. It has been Kawasaki’s best seller year in and year out. Children have been named after it. It would still be with us today if only the Deep State had not intervened for the benefit of the Harley-Davidson Pan America.

Of course, everything written above is drivel,  except the massive fuel tank.

The KLR650 has a 6.1 gallon fuel tank. Think about that for a moment. A single cylinder bike with a 6.1 gallon factory installed tank. Need to go 300 miles between stops? This bike can do it.

There have also been a host of improvements through the years. The KLR evolved quickly in the early 90s, with many relatively small changes. The bike saw a major redesign in 2008, with bigger changes to engine, suspension, and some controversial “new bodywork” that probably hurt sales more than anything else.

Reliability has always been an area where the KLR650 has reigned supreme, even with The Doohicky related issues.

Owners of the KLR650 are vehemently loyal to their bikes, and for good reason. These bikes are trusty servants, milk crates and all. 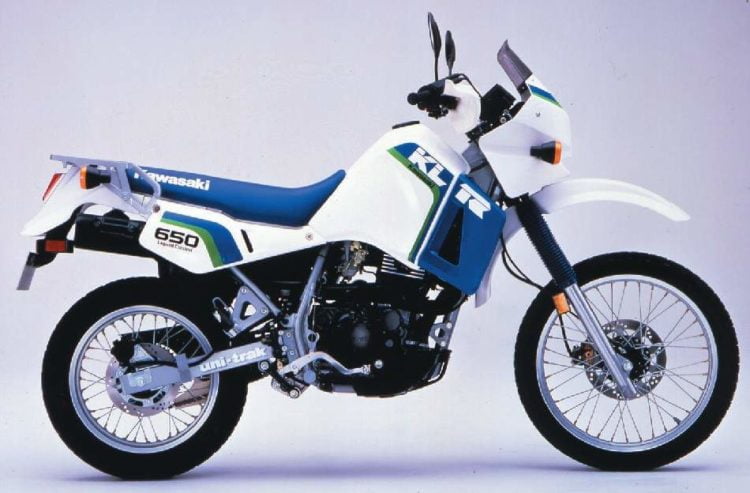 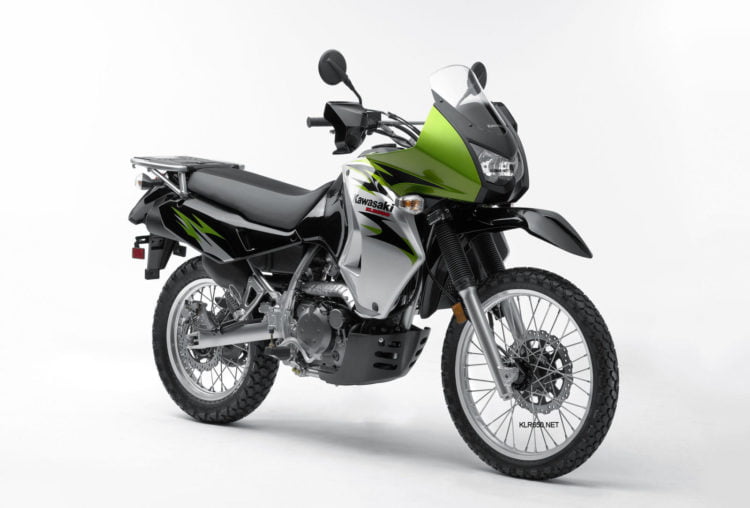 As the new Euro5 motorcycle emissions standards were phased in, the KLR650 was unceremoniously phased out.

As you are no doubt aware, the ADV segment has exploded over the last decade. Kawasaki has pretty much stayed on the “pavement” end of the ADV spectrum with their Versys lineup. Suzuki was in a similar spot with their V-Strom 650, and recently added the V-Strom 650XT model with 19” / 17” wire wheels.

With the demise of the KLR650, it makes sense for Kawasaki to go after the new mid-size off-road focused ADV segment. KTM’s 790 Adventure has been a tremendous success, Yamaha’s Tenere 700 is eagerly awaited, and Honda isn’t really in the mid-size segment.

Kawasaki is in a good position to replace the KLR650 single with a new twin cylinder off-road focused version. They have a well proven engine, they have extensive off-road and motocross parts on the shelf, and they have a reputation for reliability that takes generations to establish.

The $10,000 question is: Which way will Kawasaki go? Will they follow Suzuki and simply add a 19” wire wheel to the Versys and declare it to be off road capable? Or perhaps they will make a bolder step like Yamaha and build a more off-road focused bike with their existing mid-sized engine.

A few weeks ago a very well executed Photoshop image started circulating around the internet. I tried to track down the original creator but it has only led me in a circular pattern. US online mags (Rideapart and Visordown)  point towards an Italian online mag (OmniMoto), which points to a German online mag (Das Motorrad). Das Motorrad doesn’t seem to have any relation at all to the photo. As a result, I can only credit the photo to “Unknown Internet Photoshop Genius”. 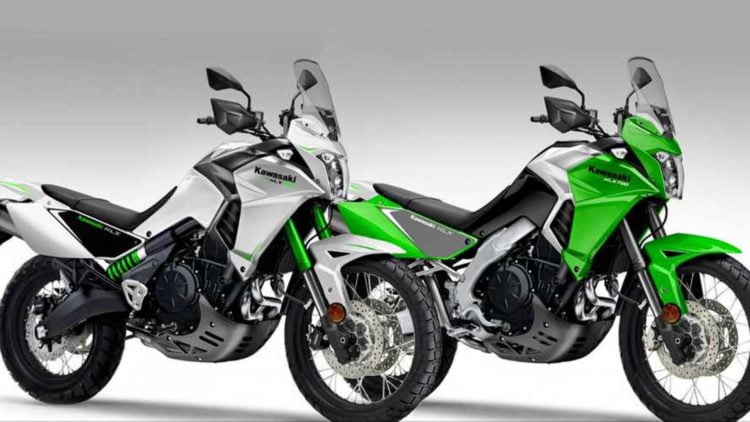 As you can see from the image, one of the bikes is portrayed as a Versys 650 chassis with a long travel fork and a 21” dual disc front wheel. The other is a KX250-esqe aluminum framed model, with the same USD fork, wheel, and brake package. I can’t tell if the artist chose a 17″ or 18″ rear wheel for these renderings.

Nothing works better than a PowerPoint presentation for comparing and contrasting specifications. Feast your eyes upon this wonder: 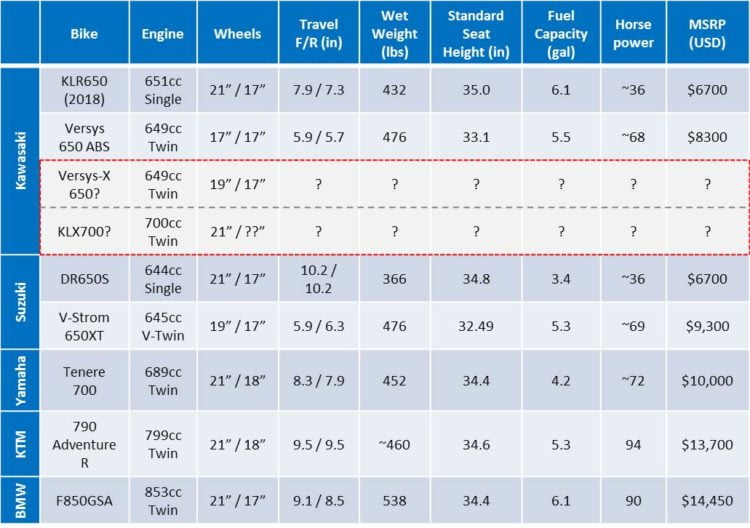 All specifications are from manufacturers websites unless noted with a ‘~’ symbol.

As you can see, the KLR650 is a bit portly. You can also see that the V-Strom XT and the Versys 650 are lacking suspension travel compared to the more modern bikes and the DR650S.

The future Kawi, be it a KLX or a Versys-X, will need some specs. What do you think? 17″ or 18″ rear wheel? How much suspension travel? Feel free to add your two cents in the comments below.

Here’s everything that I know about Kawasaki:

What will Kawasaki Do Next?

It seems like there are two likely options for the KLR replacement:

Here are my guesses as to the approximate specs for the potential configurations:

If my guess is right about the pricing, Kawasaki would only be able to add $1200 worth of content to the existing Versys 650 to build it into a KLX700. That $1200 includes amortized investment costs, which means only $300 to $400 in actual parts. I don’t know if Kawasaki would be able to upgrade forks, shocks, and wire wheels for $300-$400 per vehicle.

Here is my best guess: Kawasaki is a conservative company. I think they will follow the path that requires the least investment cost. That means a Versys-X 650, not a KLX700. 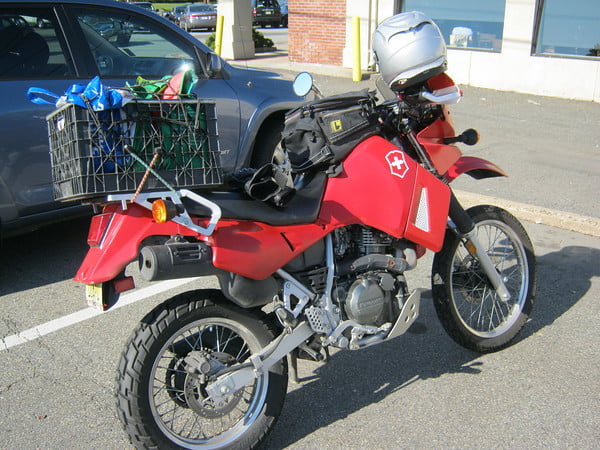 Obligatory photo of a KLR650 with a milk crate. Photo Credit: sporttouring.net