Even before purchasing a large stake in Bimota, Kawasaki was submitting patent applications for their own swingarm front suspension system. It has similarities to Bimota’s Tesi swingarm front end, but also some significant differences. “Funny-front-ends” (FFEs), one term used by chassis designers to describe non-telescopic fork front suspension designs, are few and far between in both production and competition, even though their advantages are widely known. Could the Kawasaki patent submissions signal their intent to bring such a design to high-volume mass production?

Kawasaki’s patent submission shows a hub-center steered setup, which is what the Tesi uses. This consists of an oversized hub with a kingpin inside that the wheel pivots on to provide steering. 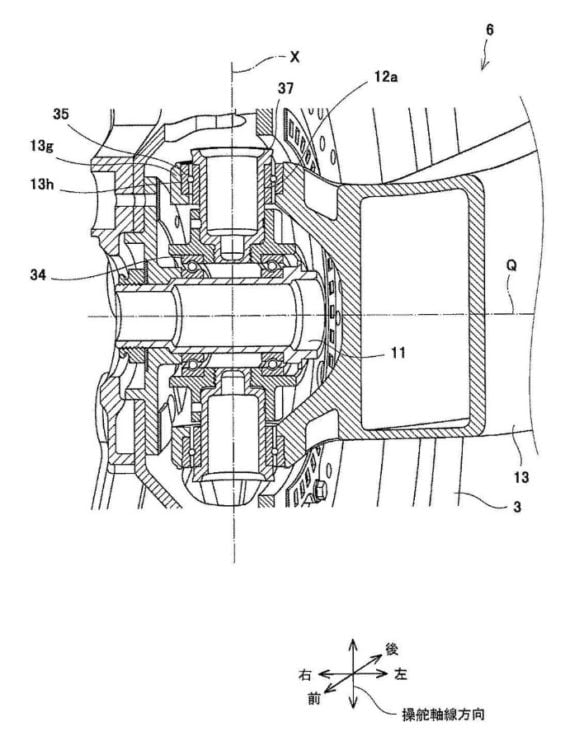 Detail of the kingpin inside the front hub. Credit: Kawasaki

The Kawasaki and the Bimota design similarities more or less end there, with the Bimota using a dual-sided swingarm to capture the kingpin, while the Kawi drawings show a single-sided unit. And whereas the Tesi utilizes a conventional single-pivot swingarm, the Kawasaki has a four-bar linkage setup, which would theoretically allow for an axle path that differs from the simple arc of a single-pivot unit.

Linking the handlebars to the front wheel is also a major difference between the two designs, with the Tesi using a system of linkages and rods to get the job done, while the Kawasaki has an upright and scissors link, similar to some aircraft nose wheels.

Between the two systems, the end results may be similar, that of isolating steering, braking, and bump forces, and eliminating stiction. But while the Tesi system is a low-volume affair affixed to an expensive hyperbike, the Kawasaki patent reveals that cost-cutting may be one of the advantages of their offering.

Honda’s Elf GP bike, James Parker’s RADD, Yamaha’s GTS1000 with Parker’s front end, the Tesi, and BMW’s Telelever, FFEs of past and present, never took over the world like their designers and engineers might have imagined. Whether Kawasaki’s novel system succeeds, or even reaches production, remains to be seen.