Kawasaki has announced that the ZX-14R (a.k.a. ZRX1400) hyper tourer’s days are numbered.  The hyper tourer will be discontinued in European markets at the end of 2020.  Once again, meeting tightening Euro 5 emission standards is the culprit.

The ZX-14R is one of the three bikes vying for the title of “fastest production motorcycle”.  Its stablemates were the Honda Super Blackbird and the Suzuki Hyabusa.

The Blackbird fell to the wayside worldwide in 2007.  In 2019, Suzuki stopped producing the Hyabusa for the European market again due to tightening emission requirements.  The “Bus” is still available in North America.  But how long it will be is not known.

Now it seems that the Kawasaki ZX-14R’s time has come in Europe.   Apparently, the ZX-14R cannot be made to comply with Euro 5 emission standards in a commercially viable way.  For the time being, the ZX-14R is elsewhere. 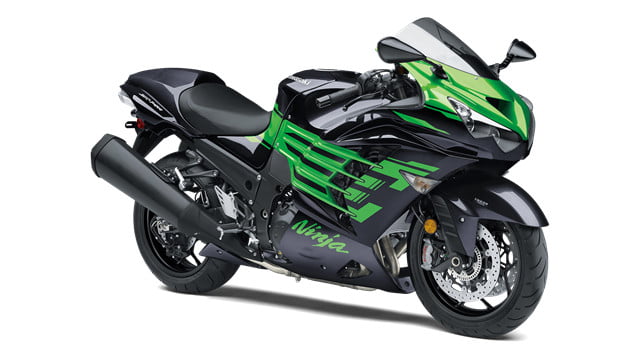 The ZX-14R was launched in 2006.  During that time, it received a stream of updates than raised its horsepower rating from about 194 HP (197 PS) to 207 HP (210 PS).  It also benefited from a revised more slippery fairing as well as the slipper clutch and traction control from the ZX-10R.

While initially, Honda, Suzuki, and Kawasaki were in a race to produce the first 200 MPH streetbike sentiment from the non-riding public and government agencies forced the three companies to agree to limit each of the bikes’ top speed to 186 MPH (300 KPH).

Although the ZX-14R’s time seems to have come, Team Green devotees have nothing to worry about.  Kawasaki continues to build massively powerful machines that can easily match the ZX-14R’s top speed and power.  Kawasaki’s Ninja H2 series of bikes may not have the sport-touring credentials of the ZX-14R, they certainly have as much and more power than the bike they replace.

Still, the ZX-14R had a good run, including the title of the fastest production street motorcycle.