It’s nice to know who you’re riding with.

The guy on a pretty green Harley was already there, waiting for the light when I rode up. We exchanged glances. I nodded. He didn’t.

We were about to head east on Washington State’s Highway 20 out of Mt. Vernon, bound for the North Cascades Highway. The light turned, we took off, Harley Guy in the lead – fine by me. We had straight two-lane for miles before reaching glorious curves, traffic-heavy. I’d hate crawling through the mountains at bagger-speed but didn’t care in the flatlands.

But what’s this?! Harley guy was drifting back and forth over our lane. Scuffing in new tires? I drifted back, keeping lane-right. Harley Guy slowed, sped-up, slowed – up and down 12 or 15 mph each time. Cars on the busy road would get way ahead and he’d goose it. To hear his straight-pipes? Maybe he’s stoned. Just hateful? It forced me and drivers behind to back off, quickly occasionally, then he’d run steady until we’d pick up the pace and close the gap, then he’d back off again.

Oncoming traffic was too steady for passing so I tried slowly putting more room between us to absorb the speed variations, but that got me tailgated. I eased closer, and Harley Guy hit the brakes hard for no apparent reason, forcing me and following traffic to do the same. I  looked for a place to pull off the country road, without luck. He did that stunt again so abruptly I had to run up beside him to keep the truck behind from driving over me.

About then a gap opened in opposing traffic so I gunned it past on the left and cruised up to a safe distance behind the car ahead, glad to be rid of the guy ~ but then he roared past on my right so close his jacket sleeve brushed my knee.

I was ready to tear his head off and stuff it but managed to grit my teeth. Luck then arrived in the form of a side-road and I took it, trail-braking deep at the limit. I found a parallel road, rode slowly, let my anger ease and rejoined the highway a couple miles later.

Never saw that clown again but the experience got me thinking about how desirable it is to know who you’re riding with. That was the second time in recent memory another rider made my ride too risky – one I’d agreed to ride with! 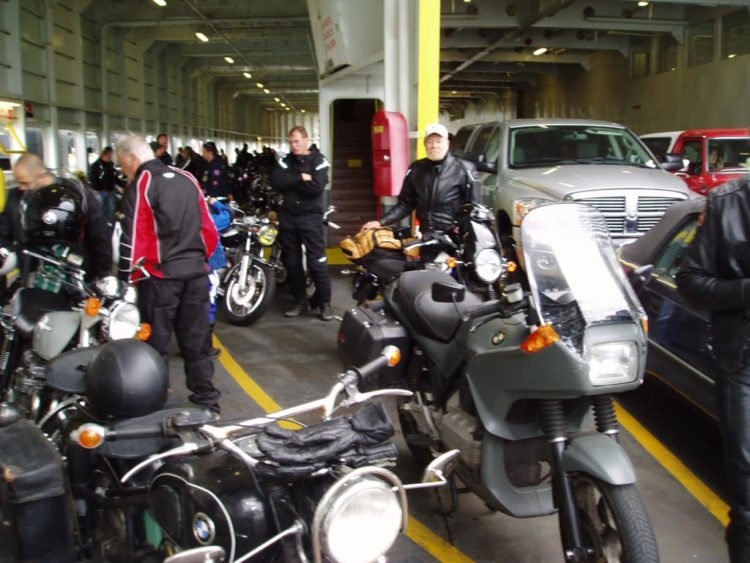 He was a new neighbor with a UJM 700. Upon learning I rode, he suggested we take a little ride together, so on a nice day we rode a few miles through town, across a bridge, past farms & fields and stopped in a public park where we pulled our helmets off.

I ride easily in towns and deer country. When he took the lead, he shot off riding ten-over everywhere. Stop signs said “yield,” maybe. He rides like he’s in The Brotherhood, where I save my hot-shoeing for empty back roads, race tracks, the dirt.

A half-minute after we stopped in the park, just long enough for me to put on my shades, he all of a sudden jammed his helmet on and took off!

I’ve ridden since 1957, served in the military, ocean sailed a lot, fished commercially and a few other things where you always look out for your buddy. It’s become ingrained, so when my neighbor impulsively split, I quickly put my helmet on and pulled goggles down over my sunglasses.

They weren’t meant to go over glasses and the strong elastic pulled my shades hard against my right eye. It hurt like hell. Determined to stick with my riding partner, I thought I’d fix it at a stop sign in a couple of minutes.

He didn’t stop at the sign. He accelerated hard onto a long country road straight, and like a dummy, I gunned it after him and caught up just as he passed a car. Moving well, I swung out to pass too, got up to the car’s left front as my neighbor pulled back into the right lane, staying next to the centerline, and just as I was about to swing right, he slowed directly in front of the car and shut the door on me. I had no place to go and we were about to enter a long blind curve.

The driver quickly slowed to make room, thankfully, and that was that. I thought.

It was still several minutes before I got the pressure off my eyeball. A day or two later there were bright flashes in my right eye, then a black window shade moved slowly up from the bottom blotting more and more vision in that eye. A surgeon put the retina back into place, more or less. I’m told that eyeball distortion is most likely the culprit, and now I’ve impaired vision. I retained my right peripheral vision, my left eye’s still great, and I’ve ridden 30,000 miles since without mishap, so consider myself lucky, but I consider that guy a Jonah!

Live & learn: Had I gotten to know that clown some first, I would never have ridden with him. He clearly lacks good sense and consideration for others. 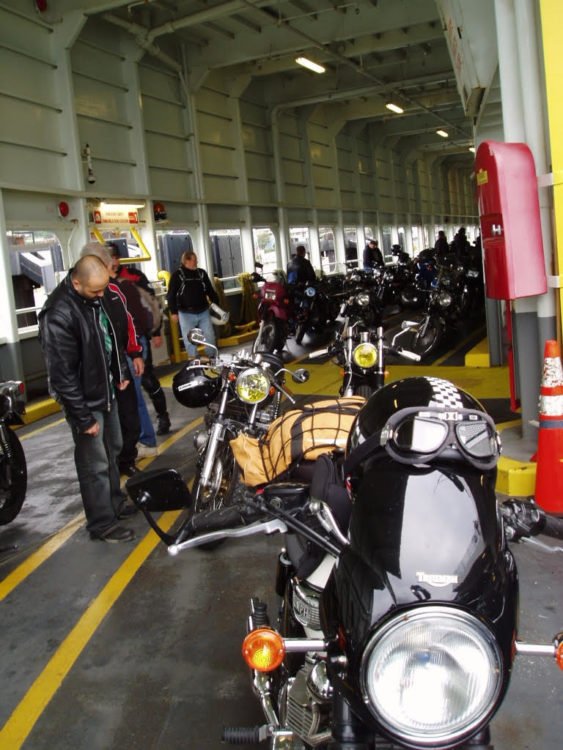 But, you can’t always pick who you ride with. Coming off crowded ferry boats, all riders leave together. You can only hope the guy close in front of you can handle the wet steel ramp, and there’s another riding inches from your elbow.

You can be happily surprised. Twice over the years I’ve ridden with the Hells Angels. Briefly. Strangers to me, but both times they were good riders. Probably a membership requirement.

The first time was in Northern California, 1967 a bit of a comedy: I was on my brand-new Jawa 350 Californian two-stroke, of all things. It had a bright red & chrome tank, heavy white fenders. On the back was a cute young librarian in fancy tight leathers, We’d caught up with the tail end of a large pack of Angels on a run through Mendocino County. All had miles to go on a two-lane, but they were only doing 40 mph.

None too sure about passing `em, I hung back watching. All wore ‘colors’ and the pack stretched a quarter-mile, riders side-by-side thundering along nose-to-tail, hair in the wind in those pre-helmet law days.

They were way too slow for me, but I was a young office worker with a pretty girl on what to those guys must’ve looked like a clown bike. At last I said to hell with it – I wasn’t going to keep pottering along watching choppers spark pavement through every curve. We didn’t have time to stop for a while and there was no alternate route.

I gunned it, passed as many as I could on a short straight, slowed, nodded to the right and the pack made room for me. A guy nodded back and I slid in among `em. When it was clear, I pulled out with a wave ‘so-long’ and goosed it passed a bunch more. They made room again as we approaching another curve. The next pass got me by the rest. With a wave, we vanished into the distance – or a cloud of blue smoke.

I still grin at the thought of that picture: All those choppers, extended forks, long hair flying – and sticking up in the middle of the pack the couple from a Honda ad in bright white helmets on a funny bike.

I guess because that and other rides with strangers have worked out, I never gave a second thought to riding with strangers – until fairly recently. Now with my right eye a constant reminder, I’m extra watchful when invited to ride with anybody I don’t know – and I never just assume we should stick together.