It has been a few months since we’ve seen any more spy photos of KTM‘s 390 Adventure.  The first set of shots came from Europe.

However, new spy shots have hit the internet and this time the bike was spotted in India.  Both KTM and Bajaj executives have said that the 390 Adventure will be produced. Bajaj President Amit Nandi said:

“KTM is a niche brand for a select few. With the 390 Adventure we would be making our long awaited entry into the niche premium dual-sport segment which is a very apt segment for Indian roads”

If the 390 Adventure is manufactured in India, the Bajaj-KTM facility in Chakan (near Pune) will likely get the honors.

This time the bike was shod with alloy wheels. This is different than the European spy shots which featured a spoked setup. Wheel sizes looked to be a 19″ front and 17 inch rear.

Perhaps KTM has two versions of the 390 Adventure in mind? KTM’s recent history is to provide a more comfortable touring based bike as well as a more off-road based “R” model. The newest 790 Adventure, the 1090 Adventure, and the 1290 Adventure all have “R” variants that have more off-road prowess than their non-“R” counterparts.

The latest spy shots show a trellis chassis that looks similar to the one found on the 390 Duke. If the 390 Duke’s rear subframe is anything to go by, mounting gear on the back of the machine should be no problem. 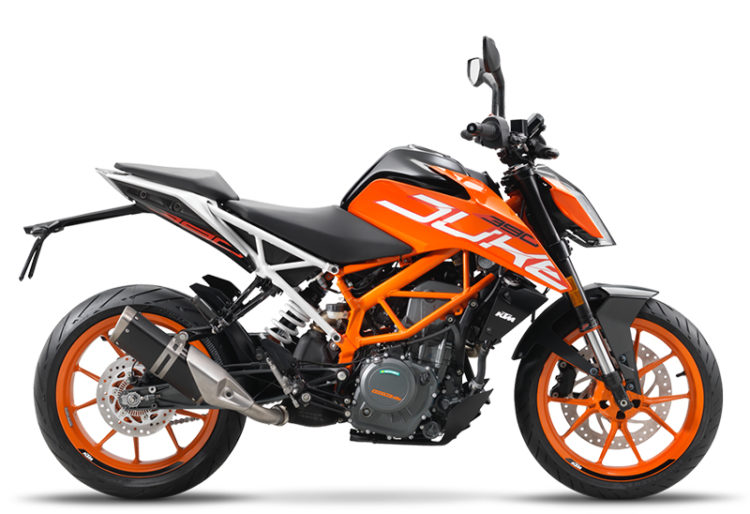 The KTM 390 Duke for comparison. The subframe looks like aluminum or steel, not plastic as found on the 690 Enduro R.

Speculation has it that the new 390 Adventure will utilize the same engine as the 390 Duke “tuned” for more low-end torque. That engine provides about 42 HP and 27 ft-lb of torque. So the 390 Adventure will not be a power monster, but this engine’s output should be sufficient if the bike’s weight is kept in check.

The 390 Duke weighs in nearly 340 pounds wet. How much more weight will have been added to “adventurize” the bike is not known, but its final weight will be more than a small detail.

The front suspension features an upside-down front fork, which is likely a WP unit since KTM owns WP. A single monoshock is attached to the rear. Braking consists of single discs front and rear.

In its present form, the bike has a large, narrow, low slung exhaust canister. It will be interesting to see the final location of the can. Right now it’s large, narrow, and low, but it does appear to be tucked in close to the swingarm. Even if KTM moves the can upward, it looks like hard panniers could be symmetrical without the loss of space required by the exhaust on other bikes. Soft panniers could remain evenly distributed across the rear.

The headlight looks similar to other KTM models with a split LED design. There’s also a small front windshield. It’s difficult to see whether it’s adjustable from the spy shots, but it would make sense that it is since other KTM Adventure models do have adjustable windscreens that look similar to this one.

The test mule doesn’t reveal whether there are any electronic rider aids. But unless KTM is gunning for a low-cost option, it’s likely that the final version would at least have switchable ABS since it has been well developed and implemented in a number of models and is increasingly being required by government agencies.

Since the newest KTM Adventure bikes are coming with TFT displays, the 390 Adventure will probably follow suit. If there are two versions of the 390 Adventure, perhaps the more travel-oriented machine will have a combination analog/digital instrument cluster while the “R” version has a TFT display. We’ll have to wait and see what other technology the bike may have or be available with.

By way of accessory parts, the pictures also reveal engine guards, serrated footpegs with rubber inserts, and a bash plate.

While the manufacturing of the bike in India is pretty clear, the bike’s launch date is not. Several Indian motorcycle publications claim that the bike will be launched in India as early as March 2019 while others claim 2nd half of 2020.

As for the rest of the world, the picture is much foggier. Would KTM dare launch the bike solely in India? With its European roots, KTM could be seen as providing a swift slap to the face of its European customer base if the European launch is later for Europe.

As far as North America goes, they probably have less to lose by not bringing the bike here at a similar time. KTM isn’t as established here as in Europe. Frankly, if the bike is launched in India in March, it’s highly unlikely that KTM could even launch it here at the same time.

There’s been no news of the bike being submitted for EPA testing. Even if KTM shipped a 390 Adventure here tomorrow, how likely would it be that the bike could get through all the required governmental approvals in time for a March release? Not likely.

KTM has made a significant move to bring the 390 Adventure to market. They’ve covered the heavy weight ADV segment with the 1290 and 1090 Adventure models. The release of the 790 model will cover the upper envelope of the middleweight segment.

Now it appears that KTM is concentrating on the middle and lightweight ADV segment. The 390 Adventure will be KTM’s lightweight offering and the now confirmed 500 twin cylinder engined bike could be the lower end of the middleweight market.

One thing is clear, KTM is positioning itself to provide offerings in all of the ADV bike segments.