Every once in a while, a manufacturer introduces a motorcycle that can legitimately hold the title of “game changer.” In 2019, I believe KTM has done so with the 790 Adventure and 790 Adventure R. 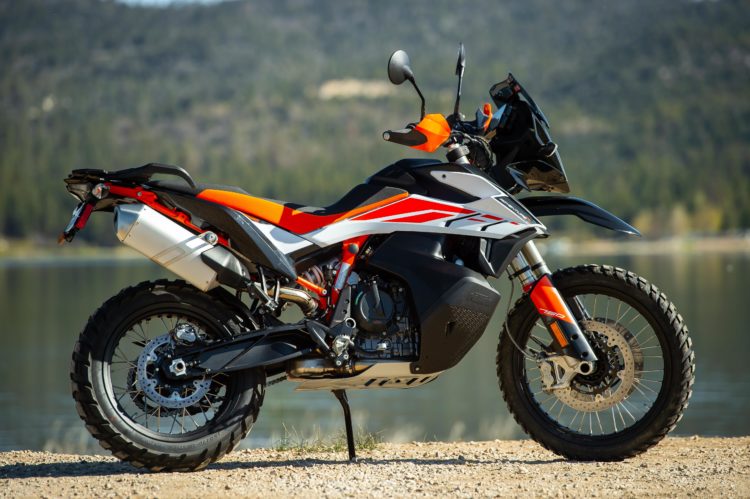 It’s hard to actually see the 790 Adventure engine when it’s in the bike, as it’s covered by a lot of plastic.

The most talked-about feature of the 790 series is its liquid-cooled 799 cc parallel twin–supposedly designed with high performance in mind, and supposedly (according to Internet rumour) made in China.

In the tech presentation, KTM’s staff were quick to correct us on the latter point–the 790 engines are made in Austria, and always will be, they said. Myth busted! However, the other rumours, about this being a proper, modern engine design, are true.

Parallel twins have a bad reputation for being boring, for sounding cheap, and for underperforming. KTM did dial down the output on the 790 Adventure a bit, when compared to the 790 Duke. It has more emphasis on low-end torque; max output is 65 lb-ft of torque @ 6,600 rpm, building strength through the bottom of the rev range. However, peak horsepower is down to 94 hp @ 8,000 rpm.

Numbers aside, it’s the other things that KTM has done with this engine that are most interesting. There’s a 435-degree firing interval, designed to emulate the firing order of KTM’s big V-twins, with a crank pin offset of 75 degrees. The engine has a DOHC, eight-valve head, with one spark plug per cylinder. The valves are actuated by finger followers, and the chain-driven camshafts are assembled, not forged one-piece units. Supposedly, this saves weight. Cam chain tension is held steady with a hydraulic tensioner.

To keep vibrations down, KTM included two counterbalancers, one driven by the crank and the other driven by the exhaust cam and situated between the two overhead cams.

Like all modern engines, maintenance intervals have been lengthened. KTM says this parallel twin has 15,000-km intervals (just under 10,000 miles) between valve adjustments. Although I never saw an oil change interval in the press information handed out at the launch, KTM 790 Duke owners have a 10,000-km (6,000 mile) oil change interval. However, 790 Adventure owners headed offroad will likely want to keep a closer eye on that, 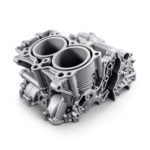 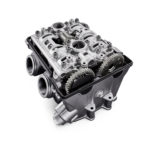 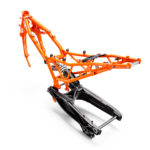 The frame is chrome-moly steel, with aluminum swingarm and trellis subframe. 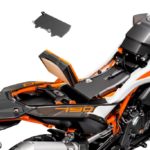 KTM intends this bike to be ridden hard off-road and has made maintenance easier by putting the air filter in a quick-to access location. 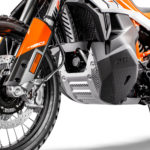 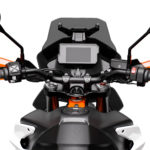 The cylinder has a sleeveless, open-deck design; the cylinders are Nikasil-coated.

The pistons are forged, with three piston rings, connected via plain small end bearings. The con rods are forged, then physically cracked to separate the ends, resulting in a superior fit once everything’s bolted back together, or so KTM claims.

The engine has two oil pumps, a scavenge pump and a pressure pump; KTM describes the sump as “semi-dry,” as lubricant is actively scavenged from the crankcase, clutch housing, and gearbox to reduce friction losses and minimize oil aeration.

The clutch is has a power-assisted slipper mechanism, meaning chunky downshifts get evened out without unpleasant results. It’s very easy to pull, and operates via cable, not hydraulics. KTM says this keeps weight down, and it probably keeps the price down as well.

Finally, the bike’s air filter is designed to be easy to change, unlike the system on the 1290 V-twins. KTM says this is supposed to reflect the machine’s intended offroad use.

The frame is made of chrome-moly steel; nothing out-of-the-ordinary here, although KTM’s staff said it was a challenge to make the frame flex, but not the engine, as the engine is a stressed member of the chassis. Nothing surprising, though, and neither is KTM’s staff’s assertion that the steel trellis subframe can handle a decent load of passengers and luggage combined. You’d expect that of any bike in this class. 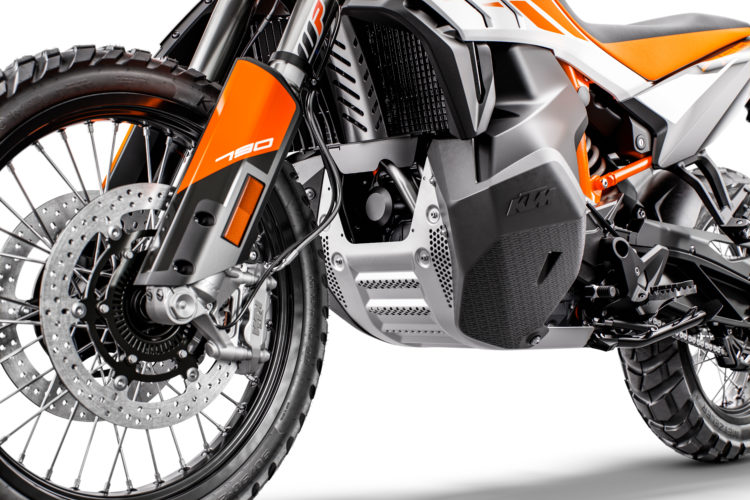 The KTM 790 Adventure has non-adjustable 43 mm WP 43mm Apex open-cartridge forks, with no adjustability. The rear shock is also a WP Apex unit, with progressive damping instead of a linkage. It’s adjustable for preload only, via a ring collar arrangement.

This is a bit surprising, as KTM usually includes adjustable suspension on its models, but I think KTM reckons the people buying this bike can’t really be fussed to mess around with their suspension, or they’d probably bugger it up if they did.

The KTM 790 Adventure R has fully-adjustable Xplor forks, also from WP. This is the same sophisticated suspension KTM has on its EXC-F and XC-W performance machines, but beefed up to handle the extra weight of the 790. One leg handles rebound duty, the other handles compression; riders can adjust the damping in each leg via dials on the top of the fork. The Xplor rear shock has adjustment for high-speed and low-speed compression and rebound damping, and preload. 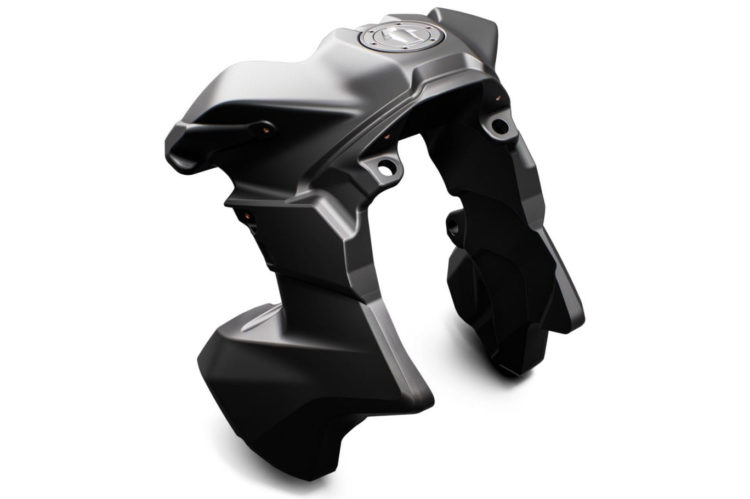 That’s a weird-looking fuel tank! However, its design works very well at centralizing weight, and KTM says it can take a beating without springing a leak. Photo: KTM

The bodywork itself is just standard KTM stuff, with the colours in the plastics to avoid some of the damage from scratching. Nothing spectacular. The windshield on the 790 Adventure is higher, to deal with windblast during the long highway miles, and the Adventure R has a shorter windshield so you don’t hurt yourself when/if you go over the bars while offroading, accidentally hitting the screen. Both windshields have 40 mm of adjustability. To adjust them, you must get off the bike and undo a screw on the front of the screen. Both windshields can be interchanged.

The R model also has a taller front fender, to reduce damage off-roading.

Nothing remarkable, until you get to the gas tank itself. KTM’s really gone out on a limb here, with a massive fuel tank that sits over the engine and frame like an upside-down U. The innovative design means most of the gas is held low, in front of your legs, in the position you’d normally see the cylinders of a BMW boxer.

It seems a bit sketchy, and when the first drawings and photos of this design hit the Internet, people thought it was crazy. However, KTM’s development riders swear they’ve been unable to destroy the tank in crashes, despite its low-slung design. At least it’s given a measure of safety from bolt-on plastic guards.

The fuel tank has 5.3 gallons capacity (20 litres), which KTM says is good for a maximum range of 450 km. If my math is right, that’s roughly 53 mpg for fuel economy, under ideal conditions. 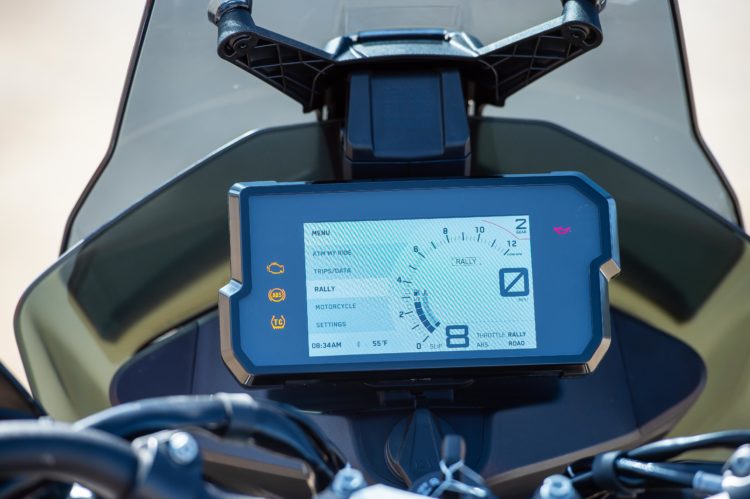 A fairly straightforward TFT dash. You can customize this display, if you want.

Here’s another area where KTM’s designers put in hard work.

As you’d expect, the KTM 790 Adventure and KTM 790 Adventure R come with leaning ABS. Unlike some of the competition, it’s standard equipment on these bikes. The ABS also has an Offroad mode (front tire on, rear wheel off), and can be switched off altogether.

Along with leaning ABS, KTM also included a traction control system that’s lean-sensitive, detecting if the rear wheel is spinning faster than it should be, and discreetly cutting power when that happens. The traction control’s level of intervention is set automatically through the motorcycle’s riding modes, and can be manually controlled through Rally riding mode. 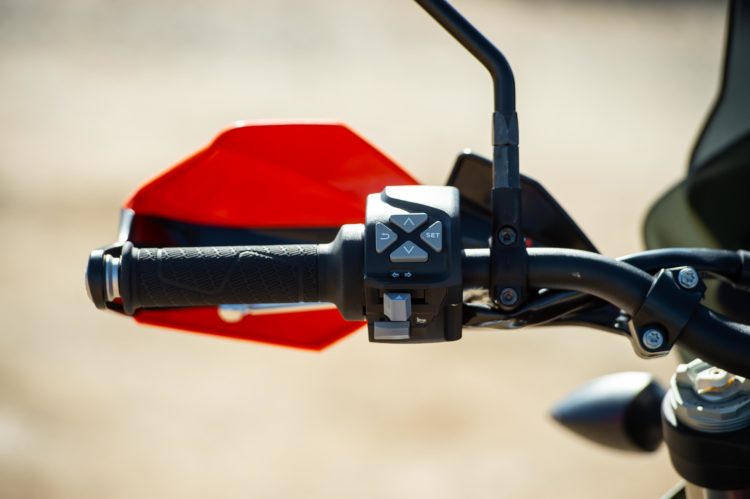 You make changes to the bike’s onboard electronics via the left-hand handlebar button cluster. It’s very simple, much easier than previous KTMs.

It’s actually quite slick once you’ve played with it a while, just like the whole electronics system in general. This bike’s onboard electronics are much easier than the systems used on Euro bikes only a generation ago; the switch from LCD gauges to TFT screens has helped here.

Of course, all these developments are possible due to onboard lean angle sensor and accelerometer, as well as throttle-by-wire. The throttle-by-wire also allows for a Quickshifter+ system, which enables clutchless upshifting and downshifting without blipping the throttle. It’s actually built into each 790 Adventure, but to use it, you’ve got to pay a dealership to unlock the software. 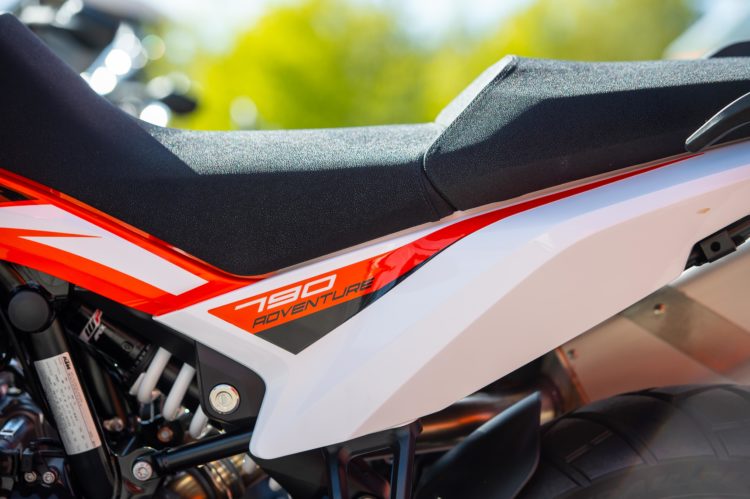 The 790 Adventure has an adjustable two-piece seat, while the R model has a one-piece seat with no adjustment.

KTM also included a Motor Slip Regulation system on the 790 series, which it describes as a “reverse traction control.” This system determines if you’re about to lose rear wheel traction due to a quickdownshift or quickly cutting the throttle, then stops the engine from building excessive drag torque by feeding enough throttle to keep deceleration stable. Again, another advantage of throttle-by-wire.

Alas, you’d think cruise control would be standard on these machines, but it is not, as KTM has to add an electronic widget to enable it. That means it’s an add-on you’ll pay extra for.

Both bikes come with an auto-darkening 5-inch TFT screen as standard, with a customizable display. You can control the KTM MY RIDE app through this screen, managing music or navigation duties, or taking incoming calls (it won’t let you make outgoing calls). 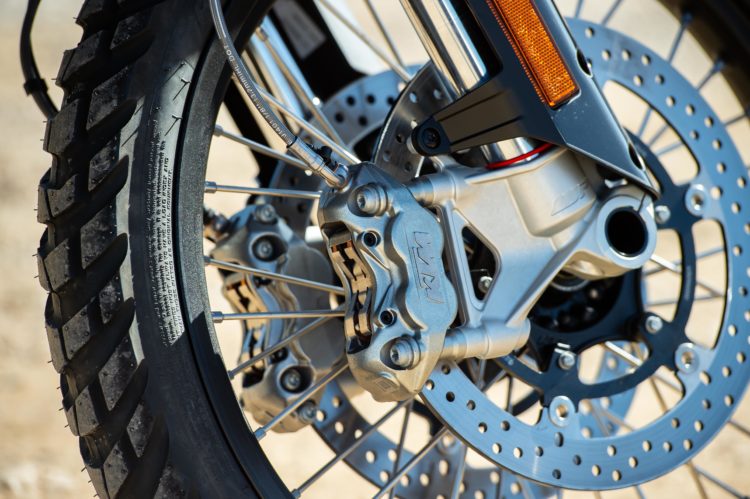 Those brakes, though. The stoppers are a far cry from the old single-pot units that so many riders started their ADV careers on.

There are two possible seat heights (830-850 mm) for the 790 Adventure, and it has a two-piece seat. The Adventure R has a one-piece seat, set at 880 mm, with a rally-style one-piece seat available as an accessory.

Other accessories include hard luggage, an Akrapovic can (the full race exhaust available for the Duke 790 won’t fit with the Adventure’s skidplate), various bits of armour, and upgraded footpegs.

KTM claims both machines have a 417-lb dry weight, and unofficially, we understand the wet weight is at 450 lbs. That’s barely more than a fuelled-up KLR650, just for the sake of reference, which came in around 430 lb wet. Claimed wet weight on the BMW F850 GS Adventure is around 500 lbs, as is the Honda Africa Twin.